Economic downturns typically mean layoffs and cutbacks for companies, but for law firms involved in bankruptcy work, they can be a goldmine.

Many law firms have stepped up their efforts to build out their bankruptcy and restructuring practices as they anticipate plenty of this work if a projected economic downturn comes to pass.

The battle for bankruptcy talent is already heating up with some major lateral hires in the space over recent weeks.

These law firms are looking to find the right of balance of bankruptcy lawyers, and competition is tough, given a relatively small pool of talent and the ebb and flow of this type of work.

“There’s this strong feeling that there’s another wave of restructurings coming, and we wanted to be well positioned to increase our market share,” said David Feldman, co-chair of the international business restructuring and reorganization practice group at Gibson, Dunn & Crutcher, which has recently grabbed laterals from competitors.

The bankruptcy and restructuring space has “always been competitive,” said Jeffrey Reisner, who has worked in bankruptcy for nearly three decades, but over time he’s seen changes.

When he began practicing, much of the bankruptcy field on the debtor side was dominated by prestigious bankruptcy boutiques, many of whom no longer exist. Even before that, major law firms didn’t even touch bankruptcy.

“There’s a decent amount of competition like there always was, it’s just changed now to go up market,” Reisner said.

Reisner made the move from Irell & Manella, where he led its bankruptcy practice, to McDermott Will & Emery in September to co-lead its restructuring and insolvency practice.

Gibson Dunn also tapped Jones Day for talent, picking up three of its restructuring lawyers, including Scott Greenberg, the former co-head of its practice in New York.

“A lot of people are thinking that there is going to be another wave of restructuring and are thinking about whether they’re best positioned to capitalize on that opportunity at their current firm or is there another platform that’s better,” said David Feldman, co-chair of Gibson Dunn’s international business restructuring and reorganization practice group.

Feldman himself has fielded phone calls from eager headhunters looking to recruit him to other firms, but he said he’s quite content in his current role.

The demand for top restructuring lawyers will increase when law firms see evidence of the next recession, but the talent pool of high-quality bankruptcy lawyers is limited meaning practices can only grow so large, and competition for the best lawyers could get fierce.

Thanks to a longer than average strong economic cycle, law firms haven’t had much bankruptcy work to do over the last 10 years, said Reisner. So there’s not a very ready crop of younger lawyers that have experience in the space, he said. 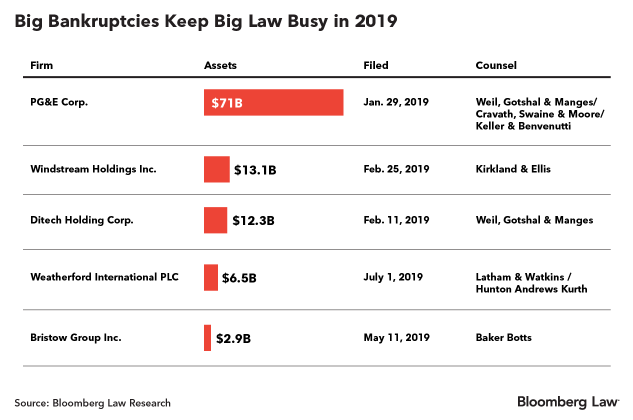 On the other hand, firms have had more time to consider how to prepare for a recession than they did in 2008.

Kent Zimmermann, a legal consultant with the Zeughauser Group, said that while the last recession happened quickly, a decade of a strong economic cycle has given firms a chance to prepare by recruiting and building out their talent in a way they couldn’t ten years ago.

“This time feels different in the sense that there feels like there’s a big lead up to a potential slowdown,” he said.

Major, Lindsey & Africa partner Lawrence Mullman said that, as a recruiter, he’s seen demand grow over the past three to four months for bankruptcy partners as well as a big demand for associates.

While the partners can theoretically assign the work and supervise it, “they just need more people to do the work,” he said.

For its part, Gibson Dunn will be looking to add associates to its roster to support the partner count it has in its already busy bankruptcy practice, Feldman said.

Feldman learned in the trenches just how busy a recession can keep Big Law’s bankruptcy teams.

After 13 years at Kramer Levin Naftalis & Frankel, he made the jump to Gibson Dunn in October 2008 as co-chair, less than a month after Lehman Brothers filed for Chapter 11.

“When we made our move in 2008, we expected a certain kind of work flow based on our prior experience,” Feldman said. But even as a seasoned lawyer he was surprised by the volume. In his first two years at the firm, his team did nearly double the amount of work in billings they had thought was possible when they first arrived.

“Every day, every week there was a new case breaking,” Feldman said.

Though there hasn’t yet been the full-scale economic breakdown that was seen during the recession, attorneys see some of the same patterns across particular industries, like oil and gas, retail, and healthcare with more restructuring work expected to come over the next few years, Feldman said.

Barneys and Forever 21 are just some of the recent brick-and-mortar shops to fall victim to the retail apocalypse. San Francisco-based utility behemoth Pacific Gas and Electric filed for Chapter 11 earlier this year, just one of several oil and gas firms to file for bankruptcy.

Some firms that have had less of a bankruptcy and restructuring presence view a coming downturn as a chance to gain one.

Christopher Donoho became the head of Hogan Lovells’ bankruptcy practice earlier this year and spent time talking with its CEO Stephen Immelt about the firm’s preparedness for the next global economic downturn.

“First thing I did coming into the position was really to take a look at what we had and what we didn’t have,” Donoho said.

Hogan Lovells formed via a merger between Washington-based Hogan & Hartson and London-based Lovells in 2010. While Lovells profited from a strong restructuring bench in the U.K. during the last recession, Donoho said the U.S.-based Hogan historically wasn’t necessarily thought of as a go-to firm for restructuring.

But Hogan Lovells has since built out bench strength in the practice, bringing on several new partners over the last few months, including the co-head of Weil Gotshal & Manges’ French restructuring practice, Philippe Druon. Donoho also noted that the firm plans to branch out into Asia, and hopes to add to its practice in Hong Kong.

“We’ve got a great product and great individuals, but we don’t necessarily have a name that the market necessarily equates with restructuring, so that’s on us to get out and educate people,” Donoho said.

Preparedness for the next recession isn’t merely about number of lawyers, it’s about getting the right headcount for a practice.

Despite a likely increase in business, Jay Goffman, the global co-head of Skadden’s corporate restructuring group said he doesn’t anticipate staffing up much more from current levels.

Though the firm generally doesn’t discuss its hiring practices, Goffman said that the firm tends to staff its matters leanly and as a result, doesn’t need to adjust its hiring based upon the business cycle.

During the Great Recession, some law firms were swamped with work that they hired swaths of lawyers to manage. Two years later when the work dried up, they were laid off.

“We don’t want to make market timing decisions on people,” said McDermott chair Ira Coleman, “whether that’s on the way in or way out.”

With assistance from Alex Wolf

Meghan Tribe
Reporter
‘This is Who We Are:’ Tech-Minded Law Firms Don’t Fear Recession
Struggling Law Firms May Face Dissolution Risk in Recession
© 2022 The Bureau of National Affairs, Inc.
All Rights Reserved