Big Law bonus season is nigh, and firms are getting ready to throw higher amounts of money at some associates than they did last year—even after giving them two seasonal awards and a base salary bump earlier in 2021.

Annual bonuses will likely match last year’s scale of $15,000 to $100,000, though some lawyers will see special bonuses on top of that, as partners seek to reward increasingly overworked associates who carried the load for firms during another year of record profits.

“One thing firms have started to realize is that there’s no bottom,” said Stephanie Ruiter, a director at legal recruiter Lateral Link. “There’s always going to be a firm willing to pay more.”

Firms have been viewing seasonal and special bonuses as a way to retain associates in a hot talent market. In 2020, for instance, Big Law firms gave associates fall bonuses on top of annual bonuses as an appreciation for their work during the pandemic. Some firms look to repeat that approach with year-end 2021 rewards.

“I have been hearing across a lot of different firms that they anticipate that bonuses are going to be higher than they have been in the past,” said Major Lindsey & Africa managing director Summer Eberhard. 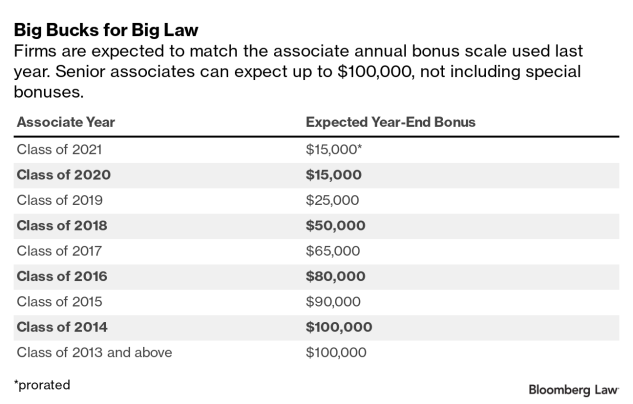 Last week, Paul Weiss announced special bonuses for certain associates based on their performance in the second half of this year. It’s likely that many Big Law firms will follow in Paul Weiss’s footsteps and issue extra, special bonuses, Ruiter said.

Such bonuses are a way to show associates the firm’s appreciation at a time when lateral hires are receiving signing bonuses of up to $100,000, she said.

The added bonuses have a special attraction for law firms this year—getting lawyers back to the office.

The promise of special payouts on top of annual bonuses could get associates to stick around long enough to work in-person, said Josh Holt, founder of Biglaw Investor, which tracks associate compensation. That could help firms regain their sense of community and culture, he said.

“Firms are evaluating, ‘How do we keep associates? How do we get them to come back into the office?’ Bonuses could be a factor to that,” Holt said. “There are still a significant number, whether it’s a majority or just a strong minority, that are not excited about going to the office.”

The large bonuses associates receive are likely to continue beyond this year as firms increasingly rely on them to carry large workloads. Associates at some of the largest firms are on track to bill more than 1,800 hours on average this year, up from around 1,650 last year.

“Firms are going to reward their associates accordingly,” Eberhard said. “The revenues that we’re going to see out of firms after this year are going to be substantially increased from what we’ve seen in the past.”

The top 100 firms in the U.S. brought in nearly $111 billion in gross revenue in 2020, up from $104 billion in 2019, according to data from the AmLaw annual report. This continued into 2021, with revenue growing 16.5% in the first half of the year for 50 of the largest firms, according to an August Wells Fargo Private Bank survey.

Firms like Davis Polk are on track to break single-year financial records. Associates in particular will get rewards for the number of hours they have to put in because of the lack of lateral talent, Eberhard said.

But over the long haul, big bonuses won’t be enough for firms to hang on to associates, said Stephanie Biderman, a partner at Major Lindsey & Africa.

“A lot of what I see keeping associates at their firms is really feeling like they have positive working relationships with their co-workers, particularly their partners,” Biderman said.

The associates also like “having a lot of transparency about where they stand with respect to partnership,” she said, “and having the relationships where they feel like they’re heard and they’re valued.”