Big tech companies are not the only ones turning to some of the country's largest law firms for help in antitrust fights.
DENIS CHARLET/AFP via Getty Images

“Tech giants, financial services, and pharma companies are victims of their own successes,” said Steven Sunshine, the head of Skadden’s global antitrust and competition group.

Big Law firms are scrambling to strengthen their antitrust and competition practice groups in reaction to escalating attacks against their clients from the Justice Department, the Federal Trade Commission, and private plaintiffs to stem monopolization and rein in price fixing. 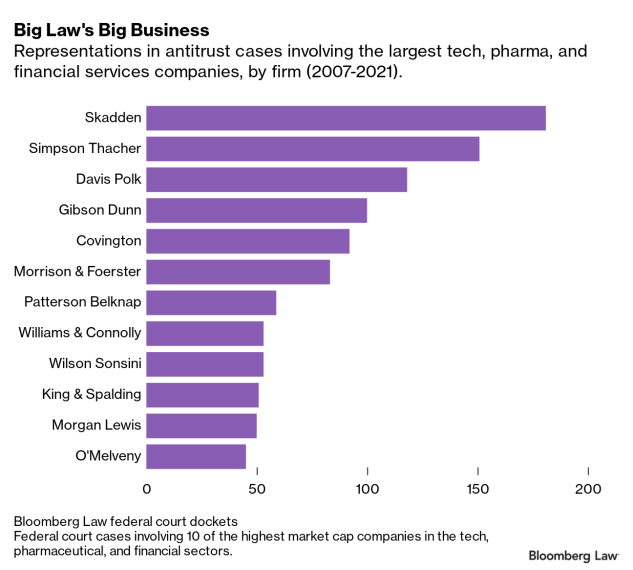 President Joe Biden’s sweeping July 9 executive order affirmed his intention “to combat the excessive concentration of industry, the abuses of market power, and the harmful effects of monopoly and monopsony.” Legislation to increase funding at enforcement agencies—and make it tougher for corporate mergers to pass muster— could give the Biden administration and plaintiffs bar more ammunition.

Skadden’s Sunshine has helped companies ward off challenges to tie ups for decades. In a span of weeks last year, he salvaged T-Mobile US Inc.'s $26.5 billion acquisition of Sprint Corp. and lead Sabre Corp’s successful counterattack against a Justice Department lawsuit blocking its merger with Farelogix.

“The underlying populist current that big is somehow bad and only happens when antitrust is asleep at the switch ensures that these companies fulfill the apocryphal curse of ‘may you live in interesting times,’” he told Bloomberg Law.

Nearly 750 antitrust attorneys work for the top 10 firms for large tech, financial services, and pharmaceutical companies. Most of these lawyers are clustered in Washington (42%) and New York (20%).

Seven of the firms have at least one former DOJ or FTC official leading their U.S.-based antitrust groups.

Despite the recent dismissals of a pair of suits against Facebook, antitrust litigation against large companies is expected to continue to rise.

Google has been sued several times of late on antitrust grounds, including a recent lawsuit by 36 states and the District of Columbia challenging the terms of that the company’s mobile app store, and Bank of America, JPMorgan, and Eli Lilly have all faced various price-fixing claims. 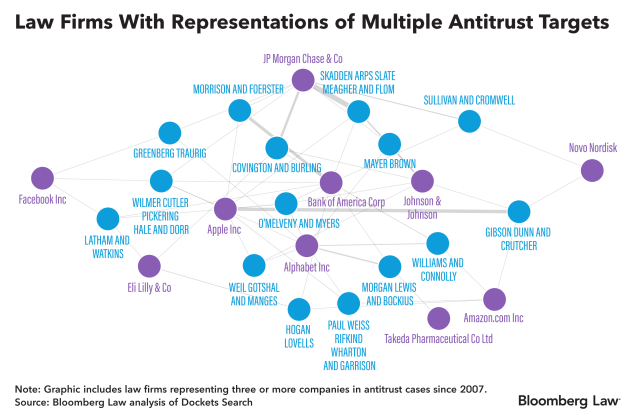 For an interactive version of this graphic, click here.

Law firms have been hitting the recruiting trail in response. Morrison & Foerster, Wilson Sonsini, Baker Mckenzie, and Latham & Watkins are among the firms that have recently been adding antitrust talent to their rosters.

First, antitrust litigation “can last years and years, and bring in millions of dollars to firms,” said Lowe. The firms that handle those court battles then have an inside track on getting the work handling the underlying merger.

Firms that take leading roles representing specific companies in antitrust matters—such as Wilson Sonsini with Alphabet Inc. and Gibson, Dunn & Crutcher with Apple Inc.—are also working for those companies in a range of other types of legal disputes, including patent, copyright, and general contract cases, according to Bloomberg Law Litigation Analytics.

The companies also have their own rapid growth to thank for increased scrutiny, said Phil Korologos, co-leader of Boies Schiller Flexner’s antitrust and competition practice group.

The renewed emphasis on antitrust “is less driven by changes in administration than it is by the realities of the marketplace,” he said, especially as these already-massive companies increase their power. 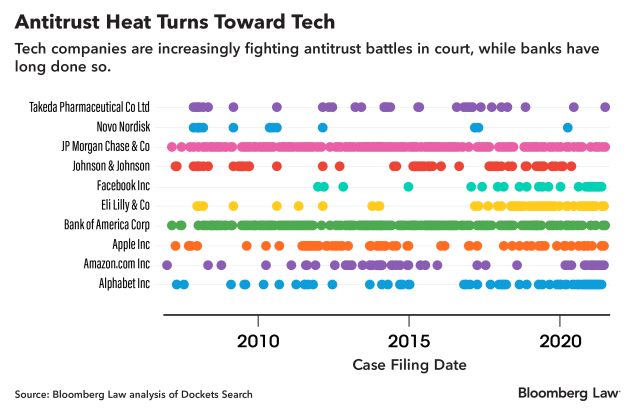 Boies Schiller is among a team of lawyers seeking $627 million in legal fees in a long running antitrust suit against Blue Cross Blue Shield, which the insurance company recently agreed to settle for $2.7 billion. The firm is leading a California antitrust lawsuit against Google.

Antitrust targets face scrutiny on a number of different fronts, including from federal antitrust agencies, state attorneys general, and competing companies bringing their own claims.

One of the biggest threats to the status quo may be a proposal before Congress—one of five antitrust-focused measures legislators are weighing—to shift the burden of proof in larger mergers, so that the companies proposing the tie-ups would have to prove that their competition wouldn’t be hurt, said Eleanor Fox, a professor with the New York University School of Law.

The antitrust system in the United States “has gotten very laissez-faire over the last 20 years,” said Fox, necessitating the current pushback. “It’s simply too hard for the plaintiffs to win—even when it’s clear they should win.”

Bruce MacEwen, president of the law firm consultancy Adam Smith, Esq., takes a different view. He said that the FTC’s Khan comes from the “New Brandeis” school of thought, named for former Supreme Court Justice Louis Brandeis—the champion of the “little guy” and a proponent of what some have termed a “big is bad” philosophy as it pertains to corporate size and power.

“That’s a whole different way of looking at things,” said MacEwen. “It’s in the air now—and it wasn’t six months ago.”