Welcome back to the Big Law Business column on the changing legal marketplace written by me, Roy Strom. This week, we look at how Kirkland & Ellis’ bankruptcy practice performed during a tumultuous year. Sign up to receive this column in your inbox on Thursday mornings.

Two weeks ago I closed the book on reporting I’d done throughout 2020 highlighting the strength of the capital markets practice. There were a lot of winners in a practice buoyed by corporate America’s insatiable demand for capital amid the pandemic.

Along the same lines, I want to share full-year data on bankruptcy fees that I tracked throughout the year. Bankruptcies surged as businesses were locked down and the price of oil tumbled in the spring and summer.

I wrote back in July that Kirkland & Ellis was the biggest winner from a slew of pandemic-driven bankruptcies, reeling in more than $145 million in fees for work leading up to bankruptcy filings on behalf of 15 of the largest companies to seek court protection from creditors in 2020.

Well, the gist of the year-end data is the same but the numbers are much bigger.

A database maintained by UCLA School of Law and Lynn LoPucki, a law professor there, shows there were 57 bankruptcies filed by publicly traded companies with more than $330 million in assets last year. That’s the most since 2009, and more are expected next year as debt incurred to withstand the pandemic comes due for a large list of companies.

The 57 companies last year paid more than $380 million to their main law firms leading up to their bankruptcy filings. Kirkland represented 23 of those companies and earned more than $200 million, according to a Bloomberg Law analysis of court documents, more than four times the amount earned by the next closest law firm.

In 2019, Kirkland advised only two of the debtors appearing in the LoPucki database, earning just north of $26 million for its work leading up to their bankruptcy filings, according to a Bloomberg Law analysis.

For context, the 151st largest law firm in the U.S. in 2019 reported $200 million in total revenue, according to AmLaw data.

Kirkland’s $200 million figure is only a fraction of the fees those 23 cases will bring in. It accounts for the work Kirkland did before the companies filed for bankruptcy, not the work the firm has done for them since. In many cases, the fees incurred during a bankruptcy eclipse those leading up to it. 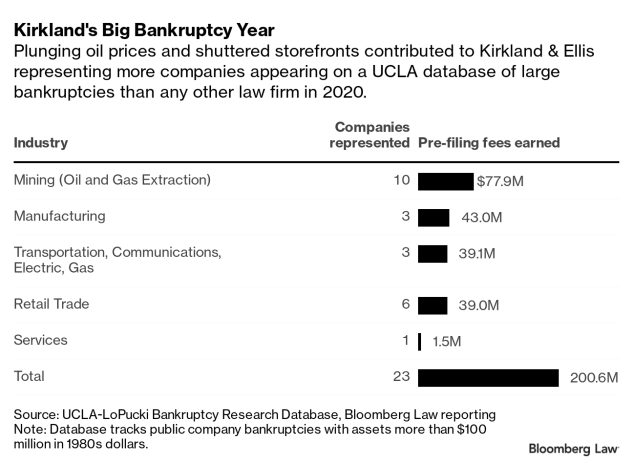 On the flip side, it’s important to point out the fee data only includes firms who represent the bankrupt company, known as the debtor, in these proceedings. While that is usually the largest role for law firms in a bankruptcy, it’s not the only one. A handful of other firms work on every case representing creditors or other parties.

The LoPucki database shows an even greater rise. In 2019, there were 25 filings by public companies that reached the database’s roughly $330 million assets threshold (which is $100 million in 1980 dollars). Those debtors paid $120 million to their top firms. That’s about one-third of what was paid out in 2020.

Latham & Watkins earned more than $45 million in 2020 for work it performed leading up to the bankruptcies of the eight debtors it represented in the LoPucki database, according to a Bloomberg Law analysis. Both of those figures are good for second-most among law firms.

Much has been written about the demise of retail companies during a pandemic that shuttered most storefronts. But the oil and gas industry was the largest contributor to bankruptcy fees in the LoPucki database in 2020.

There were 19 oil and gas companies that filed for bankruptcy in the database, and they paid their law firms $132 million for the work leading up to their filings, according to a Bloomberg Law analysis. Of that, more than $70 million went to Kirkland, which advised nine companies the database categorized as “oil and gas extraction” firms.

Bloomberg has reported there is a record level of debt owed by companies referred to as “zombies” that could be drifting toward restructuring. More than 200 companies as of mid-December were not earning enough to make their interest payments, Bloomberg reported, matching the definition of “a zombie company.”

If conditions don’t improve for the walking dead, “LoPucki watch” may be alive and well during 2021.

On Litigation Finance: Longford Capital’s Bill Strong, a former Morgan Stanley executive who helped sell litigation finance to major investors, resigned from his position as chair of the Chicago-based litigation finance firm. It comes as Longford also announced it raised more than $430 million in its third fund.