The threadbare hierarchy at Berkshire Hathaway Inc. that Warren Buffett has long been proud of extends to his legal department.

There isn’t one—not even a general counsel within its headquarters staff in Omaha, Neb., of roughly 30—even as Buffett’s conglomerate has grown to almost a quarter-trillion dollars in revenue. Its decentralized legal and compliance model leans on the Los Angeles-based law firm where Berkshire’s vice chairman, Charles Munger, and board member Ronald Olson are name partners.

Berkshire paid $8.4 million last year—up from $6.1 million in 2019—to Munger, Tolles & Olson, according to the company’s annual proxy statement, and $105.4 million in all since 2005, the first year Berkshire disclosed exact fees. Last year’s fees were the fourth-most Berkshire has paid the firm in the past 15 years.

“There is no other company of that size who has this kind of decentralized, autonomous structure where all the legal functions are pushed down or out,” said Lawrence Cunningham, a George Washington University law professor who has written two books about Buffett’s corporate governance model.

Olson, who will turn 80 in July, is the holding company’s de facto legal chief. A Berkshire board member since 1997, he joined Munger Tolles in 1968, six years after the firm was co-founded by Munger, Buffett’s longtime business partner.

During that time Munger Tolles has handled all of Berkshire’s major transactions, including its $35 billion acquisition of BNSF in 2010, and various financings, such as the $5 billion lifeline in 2008 that Buffett gave Goldman Sachs Group Inc. While Berkshire’s deal count was down in 2020, the company paid $9.7 billion to buy natural gas assets from Dominion Energy Inc., and made significant investments in Apple Inc. and Snowflake Inc., a software company that went public in September.

“If you look at the legal fees of Berkshire vis-à-vis most companies it would be quite modest,” Olson said in an interview. While he declined to discuss details, Olson said Munger Tolles has a “fair billing rate” for Berkshire and isn’t cutting any special deals for its client. 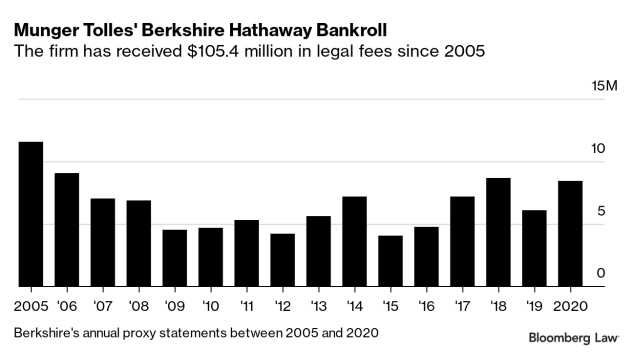 The individual at Berkshire who most closely resembled an in-house legal chief was Forrest Krutter, an attorney who served as its corporate secretary until he died at 58 in 2013 after battling pancreatic cancer. The following year, Buffett told shareholders that Berkshire had no general counsel or human resources office, “almost unthinkable at other companies.”

Tax, transactions, and litigation matters make up the bulk of Munger Tolles’ work for Berkshire, Cunningham said. He noted its fees from Berkshire are roughly what a high-end general counsel with a dedicated staff would earn during that time.

The issues on which Munger Tolles advises Berkshire are similar for other large public companies, but Berkshire stands alone with its “trust-based culture” of compliance, Cunningham said. That means a Berkshire-owned company such as Benjamin Moore, which in November fired its entire legal group and outsourced its work to Littler Mendelson, can keep a law firm on retainer and bill when necessary.

“Berkshire trusts people more than systems,” Cunningham said. “And the result has been very few scandals.”

One of the few times the model has come under scrutiny was when former executive David Sokol resigned in March 2011 after buying shares in Lubrizol Corp., a chemical lubricants company that Berkshire bought for $9 billion in cash.

Munger Tolles, which advised Berkshire on its Lubrizol buy, was also retained to help clean up the Sokol matter. Olson and lawyers from the firm worked with Berkshire’s audit committee on an 18-page report presented to the company’s board about Sokol’s activities. Cunningham said that despite some qualms about Munger Tolles’s multiple hats, it was the firm’s internal audit of the affair that led to Sokol being fired, rather than allowed to resign, the latter option initially preferred by Buffett for someone once considered a potential successor as Berkshire’s CEO.

Buffett, in a sign of his trust in Munger Tolles, tapped the firm’s former managing partner Robert Denham in 1991 to become general counsel of Salomon Inc., the parent company of investment bank Salomon Bros., which at the time was coping with a bond-trading scandal. Berkshire became Salomon’s largest shareholder in 1987 after Buffett invested $700 million for a 12% stake.

In 1992, Buffett shocked Wall Street by making Denham his handpicked successor as Salomon’s chairman and CEO. Denham, who returned to the firm in 1998 after orchestrating Salomon’s sale to Travelers Group Inc., is one of several Munger Tolles partners who maintain close ties with Berkshire. Others include Judith Kitano, who specializes in debt deals, and litigators Kelly Klaus and George Garvey, Olson said.

And there’s Munger, who turned 97 on Jan. 1. He hasn’t worked for the firm that bears his name since 1964 but has spent more than 50 years mentoring Munger Tolles lawyers and remains a sharp legal mind, Olson said.

Berkshire doesn’t do secondments, the temporary placement opportunities that some companies offer to lawyers from outside firms. Olson said having “good lawyers embedded closer to the facts and decisions” of a company whose in-house orbit includes Munger Tolles is key to a lean, principled business operation.

The firm had a role in roughly 60% of Berkshire-related deals since 2005, according to data compiled by Bloomberg, with its work covering almost $120 billion in transactions. The vast portfolio of legal work emanating from the Berkshire empire is spread among dozens, if not hundreds, of firms. 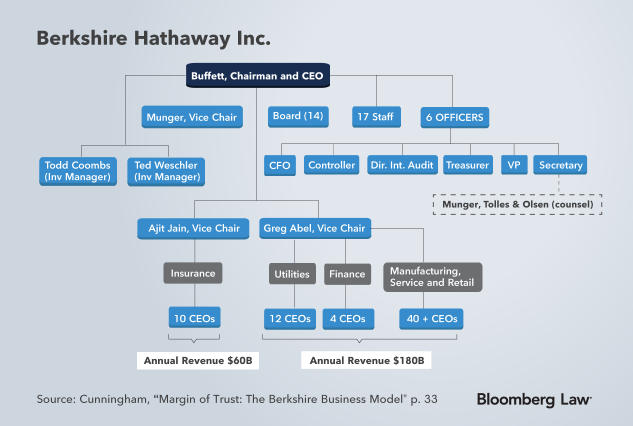 Rivkin Radler has most often represented Berkshire in federal court over the last five years, according to Bloomberg Law data, trailed by Steptoe & Johnson and Munger Tolles. Insurance and product liability cases make up roughly 50% of the federal matters involving Berkshire during that time.

Olson said he’s brought in on most major matters.

“The selection of counsel by the operating companies is done at the local level, for the most part,” Olson said. “There may be a few instances where they would come to Warren, Charlie, or me, but it’s a part of the delegation of operating authority that goes with the acquired company.”

Olson owns more than $60 million in Berkshire stock, according to data collected by Bloomberg, after buying another $900,000 worth in December.

Olson is complimentary of the General Electric Co. model that created sophisticated in-house law departments led by general counsel and chief legal officers, a development he views as “good for corporate America.”

He also sees potential limitations in that structure—too much bureaucracy, insular judgment, and inhibited communication with multiple layers of in-house lawyers that can sometimes filter important information from getting to a CEO—and another way, the Berkshire way, of getting to the same ethical outcome.

Munger Tolles, in contrast to an in-house legal chief, is constantly exposed to other companies, regulators, and adverse attorneys, Olson said. Berkshire can also adjust to the “peaks and valleys of work demands” by offloading legal assignments to Munger Tolles, Olson said.

Combine that with the “web of trust” ethos at Berkshire, one that Olson and Cunningham said incentivizes self-policing, and a company can reduce complexity and the number of people it employs to enforce rules and regulations.

As Olson sees it, rules can be a bit overrated.

“If you have a bunch of rules, people can always find ways to get around them and justify something,” he said. “Bad news must travel faster than good news,” added Olson, quoting a Buffett-ism. “We don’t have to crowd the edge of propriety, there’s plenty of money to be made in the center of the field.”