U.S. Supreme Court nominee cast herself as a judge who puts her personal preferences aside, as her Senate confirmation hearing devolved into a partisan clash over the Affordable Care Act, the pandemic and President Donald Trump’s effort to shift the court to the right in the days before the election.

After a morning of listening silently to pointed comments from senators including Democratic vice presidential nominee Kamala Harris, Barrett laid out what she said was a vital but limited role for federal judges. She said that the public shouldn’t expect courts to resolve policy disputes or make value judgments and that judges “should not try” to do so.

“I believe Americans of all backgrounds deserve an independent Supreme Court that interprets our Constitution and laws as they are written,” Barrett said in her opening statement. “And I believe I can serve my country by playing that role.” 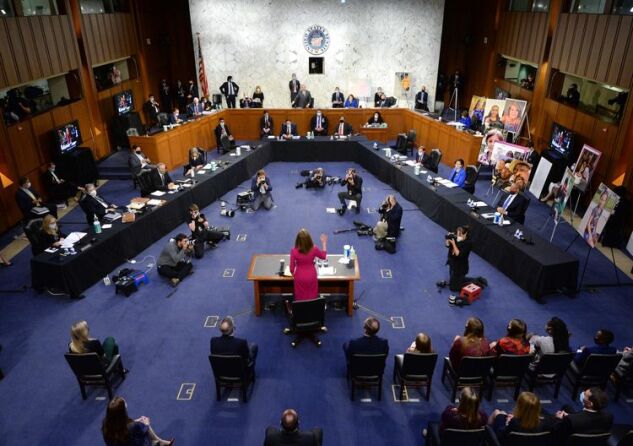 Barrett, who will undergo questioning Tuesday and Wednesday as part of the four-day Senate Judiciary Committee hearing, is all but assured of winning confirmation from the Republican-controlled Senate. She would give the Supreme Court a 6-3 conservative majority as the country heads into a divisive presidential election that could be resolved in the courts.

“President Trump and Senate Republicans see the potential to wildly swing the balance of the court,” Democratic Senator of Vermont said. “They see the ability to take the courts from being independent to making them instead an arm of the far right and the Republican Party.”

Republicans called Barrett a worthy successor to Justice , the liberal icon whose Sept. 18 death set off a historic pre-election battle over the future of the nation’s highest court. Republicans see a chance to cement a conservative majority for decades, even if the process carries political risks for the Nov. 3 election.

“There’s nothing unconstitutional about this process,” said Republican Senator , the chairman of the committee. “This is a vacancy that has occurred through the tragic loss of a great woman and we’re going to fill that vacancy with another great woman.”

Graham heralded Barrett, a 48-year-old appellate court judge, as a “gifted” academic and protege of the late conservative Justice . Barrett, a mother of seven and devout Catholic, sought to personalize herself to the senators and those watching at home. She spoke of her marriage of 21 years to a husband who has helped her raise seven children, including one with Down syndrome and two adopted children from Haiti.

Barrett pointed out she would be the first woman with school-age children ever to serve on the court and the only current justice who didn’t attend law school at Harvard University or Yale University. She ended by thanking those who say they have supported her, and made a reference to her own faith in doing so.

“I believe in the power of prayer, and it has been uplifting to hear that so many people are praying for me,” Barrett said.

The hearings come under extraordinary circumstances, as the nation grapples with a pandemic than has claimed the lives of almost 215,000 Americans. Two Republican senators on the panel tested positive for the coronavirus two weeks ago, sparking unusual safety precautions for the week of proceedings. One of them, of Utah, spoke without wearing a mask and posted a letter from his doctor saying he had met criteria to end his isolation.

Senator of California, the Democratic vice presidential candidate, said the decision to hold the hearing was “reckless,” putting workers in the Capitol and senators at risk.

“Senate Republicans have made it crystal clear that rushing a Supreme Court nomination is more important than helping or supporting the American people who are suffering from a deadly pandemic and a devastating economic crisis,” Harris said. “Their priorities are not the American people’s priorities.”

No president has ever made a Supreme Court nomination so close to an election, no matter which party controlled the Senate. The previous record was President ’s failed 1852 nomination of Edward Bradford, which occurred 78 days before the election.

Democrats worked to put the focus on a key issue in the presidential campaign: the future of the Affordable Care Act and its protections for people with preexisting conditions. Each senator highlighted the personal stories of constituents who have obtained coverage through the ACA, also known as Obamacare, or who have been affected by the spreading coronavirus.

The Supreme Court is scheduled to hear the Trump administration’s bid to invalidate the ACA on Nov. 10, a week after the election. “This well could mean that if Judge Barrett is confirmed, Americans could lose the benefits that the ACA provides,” said Senator Dianne Feinstein of California, the committee’s top Democrat.

Feinstein pointed to critical comments Barrett made about Chief Justice John Roberts’s pivotal 2012 opinion upholding the core of the ACA, which now provides health insurance for 20 million Americans and other benefits for millions more.

Senator Ted Cruz, Republican from Texas, said Democrats are seeking a commitment from Barrett that she would uphold the ACA, something she can’t offer as a judge.

“Making that promise would be violating the judicial oath,” he said.

Republicans sought to draw attention to the refusal by Democratic presidential candidate Joe Biden to say whether he would support efforts in his party to add seats to the Supreme Court.

“When they want to try to change the outcome of what courts do in the future by trying to change the size and composition of the court, that is a bad idea that politicizes the judiciary and reduces public trust,” Republican Senator of Nebraska said.

Democratic Senator of Delaware said Barrett’s confirmation could endanger Supreme Court precedents that guarantee the right to use contraceptives, get an abortion and marry someone of the same sex.

The court “may overturn some of the very principles for which Justice Ginsburg fought her entire adult life, principles that protect settled, fundamental rights for all Americans,” Coons said.

Several Democrats criticized what they said was a “super-spreader event” at the White House on Sept. 26, when Trump announced Barrett’s nomination before a packed, mostly maskless Rose Garden crowd. At least 12 people who attended the event -- including Trump, Lee and North Carolina’s Thom Tillis -- later tested positive for the coronavirus. Photos showed Barrett, maskless, with Trump and others in the Oval Office and at a VIP reception inside the White House.

Some Democrats spoke directly to voters who might be watching at home.

“This isn’t Donald Trump’s country, it’s yours,” Senator of Minnesota said, looking straight into a TV camera. “This shouldn’t be Donald Trump’s judge. It should be yours.”

Democrats haven’t been able to shake support for Barrett -- or more generally, for the swift replacement of Ginsburg -- among GOP senators. Only two of the Senate’s 53 Republicans -- of Maine, who’s up for re-election, and of Alaska -- objected to considering a new justice so close to the election.

Judiciary panel Democrats say they’ll use various delaying tactics, but unless a few Republicans turn against her, they can’t stop the schedule set by Majority Leader and Graham, or keep Barrett off the court.

Barrett would cap the conservative transformation of the U.S. court system during the Trump years, with the GOP-led Senate already having confirmed Justices and , along with 53 appellate court and 161 district court judges.

Democrats sought to avoid the suggestion that their questioning makes Barrett’s faith an issue. A backlash followed Barrett’s 2017 Circuit Court confirmation hearing when Feinstein suggested that the nominee’s religious “dogma” would guide her work as a judge.

Even though Democrats sidestepped the topic of religion, senior Republicans on the panel worked to put them on the defensive anyway.

“There’s no religious test to serve on the Supreme Court,” said Senator , a Texas Republican. “Why? Because the Constitution says so.”

(An earlier version corrected a reference to same-sex marriage in Coons’ remarks.)