The Bloomberg Law 2021 series previews the themes and topics that our legal analysts will be watching closely in 2021. Our analysts examine major trends across litigation in antitrust, commercial bankruptcy, contracts, the gig economy, and the evolution of litigation finance.

It could be easy for some to forget the global nature of the pandemic and economic uncertainty that we are experiencing in the United States. As a result, I am taking a look at a less commonly known type of bankruptcy that could provide a glimpse into global insolvency trends, the Chapter 15.

Chapter 15 is a fairly new form of bankruptcy, introduced with the 2005 Bankruptcy Abuse Prevention and Consumer Protection Act (BAPCPA) amendments. Chapter 15 allows a foreign representative of a business entity or individual to simultaneously file an ancillary bankruptcy in the United States (or other adopting nations).

According to Bloomberg Law dockets, through Oct. 31 alone, Chapter 15 filings are up a whopping 68% over total 2019 filings. In contrast, total U.S. non-consumer bankruptcy filings through the close of third quarter of 2020 are slightly down — about 2.5%, compared to the same time period in 2019. A look at these raw numbers would lead us to believe that while our economy is rebounding, other countries are floundering miserably. But that is not necessarily the case. 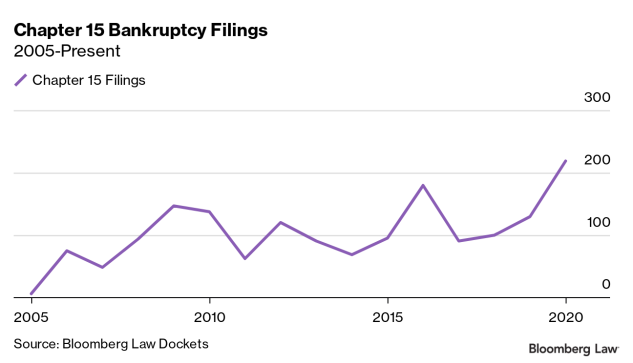 It is true that different countries have taken different approaches to corporate stimulus and that economic recovery varies. As the pandemic and economic uncertainty linger, companies will continue to experience hardship, and some will file insolvency proceedings in their respective countries. A portion of those insolvent companies that have creditor exposure or assets in the United States and that are well-positioned enough to afford multiple simultaneous bankruptcies will undoubtedly file Chapter 15 here.

No need to run out and brush up on Chapter 15, however: Even with all that, it doesn’t mean we’ll continue to see such outsized surges in Chapter 15 filings. To understand why, we need to look at who’s filing Chapter 15.

Although more than 40 countries have implemented some form of the UNCITRAL Model Law on Cross-Border Insolvency (the “Model Law”), the law upon which Chapter 15 is based, only 20 countries are represented in the list of foreign proceeding venues for 2020. Unsurprisingly, at the top of the list is our neighbor to the north. 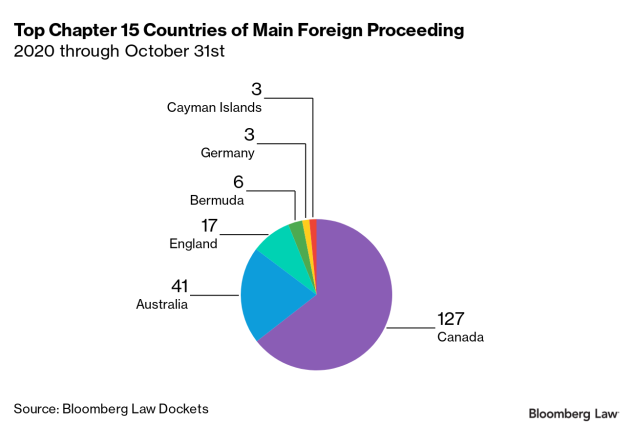 Canadian debtors account for more than half of the Chapter 15 cases filed in the United States. Even without the June filing of Cirque de Soleil and its more than 40 related entities, Canada would still lead the list, with more than 80 other cases originating in the country so far in 2020. Thanks to the Virgin Atlantic Airways bankruptcy and its 30-plus co-debtors, Australian debtors come in at No. 2. It is noteworthy that, were it not for the airline cases, Australia would barely have cracked the top 10, with only two cases. Taking third place is England with 17 cases. The only other places serving as the jurisdiction of foreign proceeding to more than a single Chapter 15 filing are Bermuda (6), Germany (3), Cayman Islands (3), Japan (2), France (2) and Chile (2).

Is this rise in Chapter 15 filings sustainable? Perhaps not.

Maintaining multiple insolvency proceedings in different countries is expensive. Also, since a Chapter 15 requires that the debtor first file an insolvency proceeding in another country, we should look at foreign bankruptcy filings to gauge what lies ahead for the U.S. courts.

If we look at the two most perennially likely sources of Chapter 15 filings, Canada and England, it appears unlikely that we will have a continued surge. The business bankruptcy filings in Canada are down. Canada’s 2020 business bankruptcy filings spiked in May – June, but decreased sharply by 25.5% in August. Furthermore, business bankruptcies for the 12-month period ended August 2020 decreased by 18.9% compared to the previous 12-month period. Canada’s robust emergency Covid-19 relief is ending soon, however, so the numbers could increase again.

Conversely, in England, the government continues to extend governmental relief for insolvent companies, most notably in the form of a ban on compulsory liquidations/insolvencies (akin to involuntary bankruptcy in the United States). The current moratorium is scheduled to extend through Dec. 31, but it has been extended several times before and could likely be extended again. Before the health crisis began, company insolvencies in England began to decrease in January, and they remain at more than 40% below 2019 levels. (However, as we saw with Virgin Atlantic Airways’ filing, it only takes one large conglomerate to file in the United States, and our Chapter 15 numbers could climb disproportionately.)

Additionally, a number of foreign companies prefer to file their main bankruptcy proceeding in the United States. In order to take advantage of the U.S. bankruptcy process directly, a multinational corporation need only meet the eligibility requirements of 11 U.S.C. § 109(a):
1. It must be a person (which, under 11 U.S.C. § 101(41), is defined to include entities), and
2. It must have a place of business or property in the United States.

Any foreign company meeting those two simple requirements could simply file a petition seeking Chapter 7 or Chapter 11 relief with the applicable U.S. Bankruptcy Court. If more foreign companies are taking that route, then lower Chapter 15 numbers in 2021 could belie the fact that United States bankruptcy judges are continuing to restructure foreign companies.