The IPO market started 2019 slowly, peaked in May, vacationed in August, then heated up again in October and November before slumping its way into 2020. The year was a mix of successes and missteps, of market resilience—and, ultimately, of increased investor reticence.

Then came the stumbles. With nearly each successive unicorn IPO in 2019 (e.g., Lyft, Uber, SmileDirectClub, Peloton), investors became less willing to succumb to the hype of these enormously valued yet frequently deeply unprofitable companies, culminating in WeWork’s withdrawn IPO on September 30th. The dark pall cast on the IPO market by WeWork’s spectacular failure, perhaps more accurately described as an implosion triggered by monumental arrogance wrapped in neo-hippy dippy marketing babble, subdued the IPO market for the rest of the year.

The change in investor mood brought about by concerns epitomized by WeWork’s troubles contributed significantly to annual IPO market results that, while more than adequate overall, disappointed expectations. As the market softened, notables such as Postmates, Endeavor Group Holdings Inc., and Palantir Technologies postponed their planned offerings. We enter 2020 with increased uncertainty about the firmness of the new year’s offering pipeline and the direction of the IPO market. 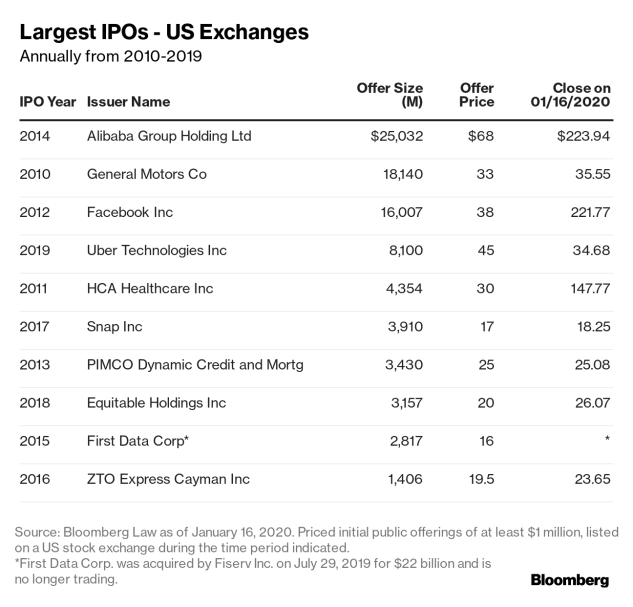 The top IPO underwriters over the past decade were:

For more about the IPO market from a decadal perspective, see Analysis: Three Decades of IPO Deals (1990-2019). 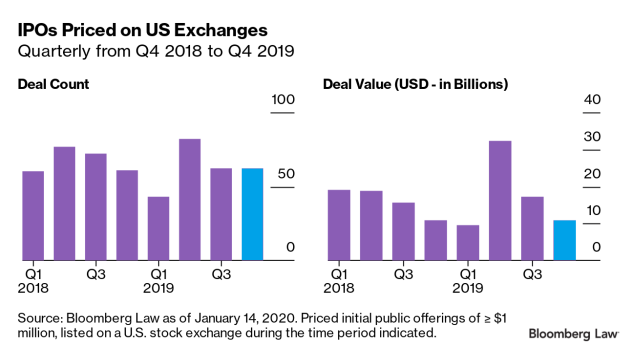 From a quarterly perspective, the Q4 2019 deal count improved slightly on Q4 2018’s total of 61 deals while deal value remained unchanged at $10.8 billion. The fourth quarter did represent a steep decline over Q3 2019’s value total of $17.1 billion despite matching the number of IPOs. 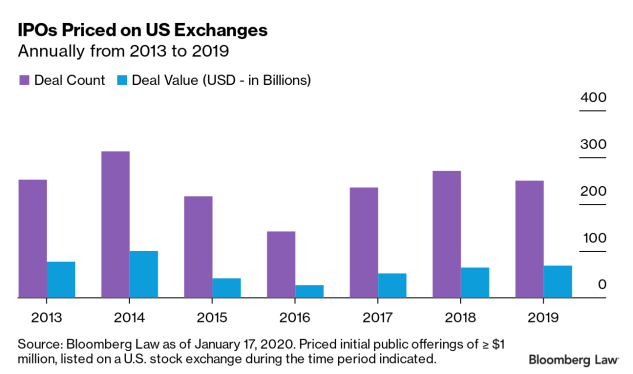 The IPO market’s year has been declared disappointing by some commentators. Yes, hopes were burnished at the end of 2018 because so many anticipated offerings were in the near-term pipeline to go public. And while 2019 did not break records, are these results really so disappointing? Consider that as recently as 2016, total IPOs numbered only 142 for the year with a total value of under $27 billion—40% of 2019’s fundraising total. In actuality, plenty of offerings did well in 2019. 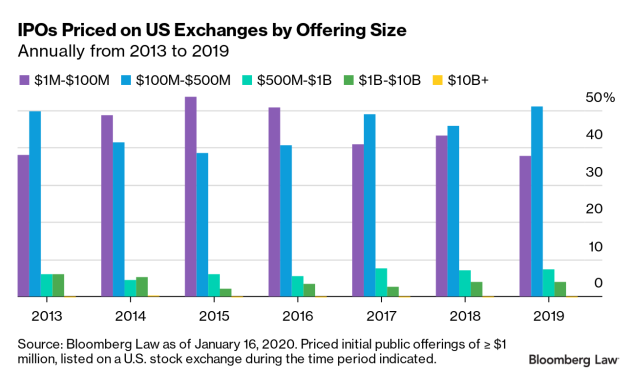 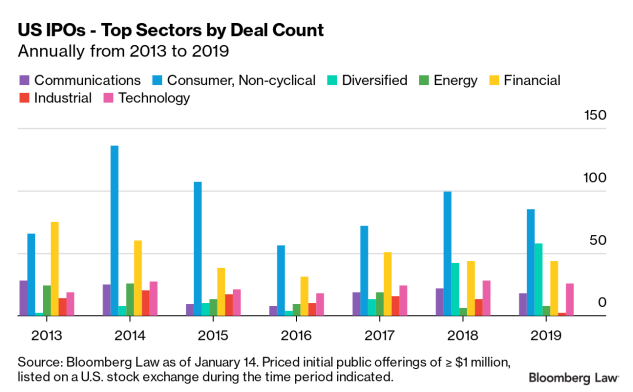 The consumer, non-cyclical segment (including life sciences), completed the most IPOs in 2019 with 85 deals, down 14 from 2018 totals. Diversified businesses improved substantially year-over-year with 58 offerings, more than enough to best the financial sector which rested on its laurels (44 deals in both 2018 and 2019). Tech IPOs did two fewer offerings last year (26 v. 28) while the communications industry tallied four fewer deals (18 v. 22). The industrial sector only saw two IPOs in all of 2019, the first annual result in single digits in recent memory.

No Change in Value Leader, While Industrial Nearly Disappears 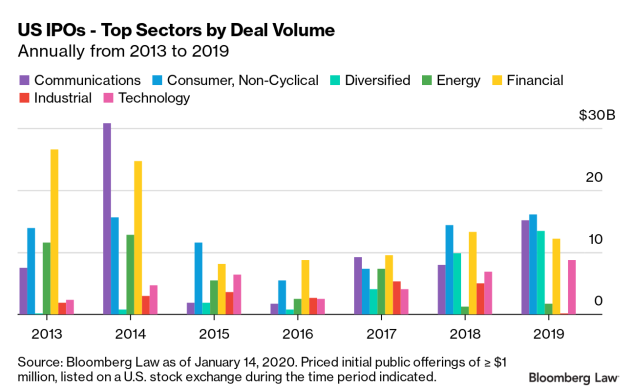 Most sectors enjoyed a strong year in 2019, save for energy and industrial. Industrials raised only $146 million from two offerings while energy completed eight IPOs, raising $1.7 billion. Energy’s total improved on 2018’s paltry $1.2 billion but was down significantly from 2017’s $7.3 billion and even more from its $12.9 billion haul in 2014.

Laggards aside, consumer, non-cyclicals once again led all sectors with $16.1 billion. Aided by troubled mega IPOs from Uber and Lyft, Communications was close behind raising $15.2 billion from only 18 deals for the year. Diversified edged out financials for third with $13.4 billion. In fourth, financials raised $12.2 billion, down from $13.1 billion the previous year, and Technology raised $8.8 billion, up from $6.9 billion in 2018.

Image
Although unable to completely defy periodic market gravity and investor fatigue (e.g., 2016), special purpose acquisition companies (SPACs) keep on keeping on, raising more money on more deals nearly every year in recent market history. SPACs are a type of blank-check company whose purpose is to find a suitable merger or acquisition of an operating company according to the selection criteria disclosed in the offering’s prospectus. A SPAC typically must complete an acquisition within 24 months of the offering’s closing or return the funds to investors with interest.

During the just completed year, special purpose acquisition companies represented 23.7% by count of all IPOs over $1 million and 19.4% by volume. SPACs raised $13.5 billion over 59 offerings. SPAC IPOs improved on already strong 2018 results by increasing the number of these types of IPOs by 22.9% and their total value by 28%.

The largest SPAC initial public offerings in 2019 were:

The top legal advisers for SPAC IPOs in 2019 were: 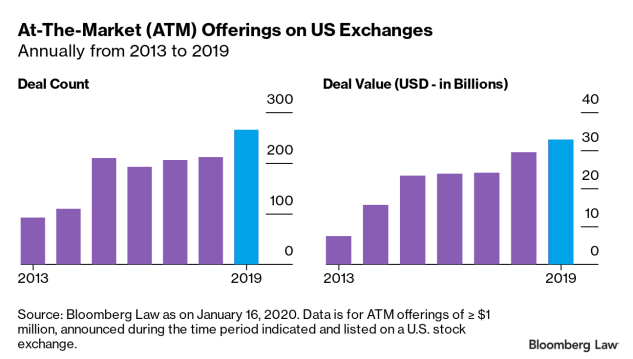 ATM offerings are a type of follow-on offering used by already-public companies. This type of offering can help issuers manage price volatility, because companies have more control over when and how many shares are sold. That increased control makes ATMs particularly attractive during periods of market volatility.

European IPOs Weaker in 2019—and Results Might Have Been Worse 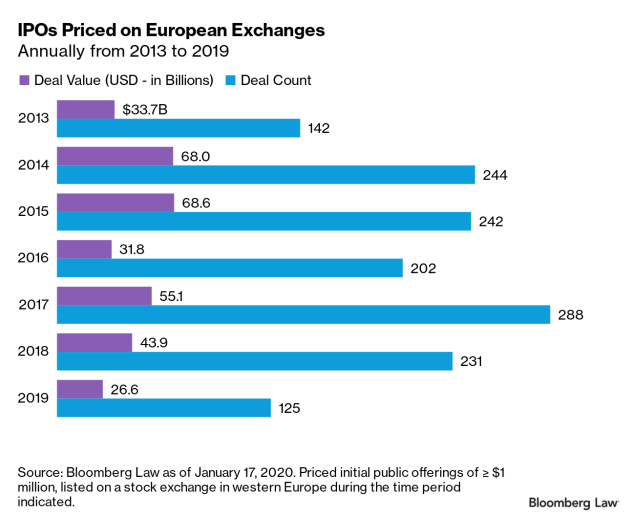 A tepid and turbulent market for IPOs in Europe this past year could have been worse. Trade wars, Brexit, populism, structural changes to the market reducing both IPO supply and demand, and an uncertain economic outlook have encouraged investors to look elsewhere. IPOs were buoyed somewhat by two $1 billion-plus offerings from bottler Verallia ($1.1 billion) and national lottery Francaise des Jeux ($2.1 billion – France’s largest IPO since Electricite de France SA in 2005) but the trends and the numbers are still discouraging.

According to a Bloomberg report based on data compiled by Schroders Plc, decreasing listings combined with M&A deals “have led to a 29% drop in the number of publicly traded companies in developed Europe between 2000 and 2018.” Particularly pronounced in the U.K., there is a trend where private equity pursues public, especially newly public, companies whose stock performance has suffered after failing to meet earnings expectations. Private equity is using its deep pockets to lure public companies back to being private, reducing the number (and quality) of publicly listed companies.

The disparity between the hardy U.S. market and a European IPO market mired in the doldrums may be attributed, at least in part, to a dearth of technology companies. Without those tech stocks and the strong growth they often provide, investors have pulled their money from the European market, looking for better returns. The top five largest U.S. companies by market cap are now technology companies: Apple, Microsoft, Google (Alphabet), Amazon, and Facebook. Europe can boast no comparable homegrown companies, and its equities markets are suffering because of that absence. The tech companies made in Europe are, like its cars, its roads, and its people, constructed on a smaller scale than those often found in the U.S.

In what one might call a phantom reason to be optimistic in 2020, U.K.-based EG Group, one of the largest independent gas station chains in the world, is reportedly planning an IPO that could be worth a whopping $12.4 billion. If it comes to pass, EG Group’s offering is expected in the second half of 2020. Assuming its IPO goes according to plan, the offering might approach half the value of all European IPOs in 2019. Unfortunately for the European market, the company is looking to the U.S. for going public, although the company has not finalized its plans.

The IPO market in 2019 absorbed the pause of a government shutdown, the tensions of a US-China trade war, Brexit uncertainty (then near certainty), a faltering then strengthening economy, multiple mishaps by monster IPOs, and a U.S. president’s impeachment. Even so, the year was roughly on par with market performance in 2017 and 2018. It continued the trend of fewer but larger IPOs; the IPO market continues to grow in dollar terms.

Heightened investor demands on new offerings are likely to continue through 2020. Those demands have not been unreasonable and there is still plenty of room for offerings to find an enthusiastic reception if the issuer comes prepared. For start-ups that are losing money, are not in the “right” industry sector (e.g., enterprise software), and face stiff competition, a different approach may be emerging.

Unicorn mattress maker Casper Sleep recently filed to go public. At least one expert, NYU Stern School of Business’s Scott Galloway, who says he consulted with Casper two years ago, claims Casper’s IPO is really a very public ‘for sale’ sign. “They don’t even plan to go public ... they’re basically saying a Target or someone, ‘Come take us out ... we’re for sale.’”

If more and more companies avoid doing an IPO, whether by continuing to raise money in private offerings as private companies, choosing a direct listing over an IPO, or seeking a buyer rather than public investors, the already declining number of companies choosing to go public may accelerate to the point where the value of the IPO market also begins to shrink.