Commercial Chapter 11 filings in July were 52% higher than the same month last year, adding to a streak of corporate bankruptcies in 2020 that so far has outpaced 2019 by 30%.
Photographer: Jin Lee/Bloomberg News

At the start of the pandemic shutdown, I felt confident that bankruptcy filing rates would soar by the time we hit the third quarter of 2020. Yet, as we wait to see any sign of a spike that would send us to 2010 filing levels, I am starting to feel like the boy who cried wolf.

While commercial Chapter 11 bankruptcies have ramped up, bankruptcy filings as a whole are down. Considering the widespread unemployment, increased business bankruptcy filings, continuing shutdowns, and stalled re-openings, consumer bankruptcy filings are so far down as to defy logic. If you read my pieces, you know that I like numbers. The more historic the numbers, the better. So, I dove into the numbers to get some sense of what’s going on here.

Where Did All The Bankruptcies Go? 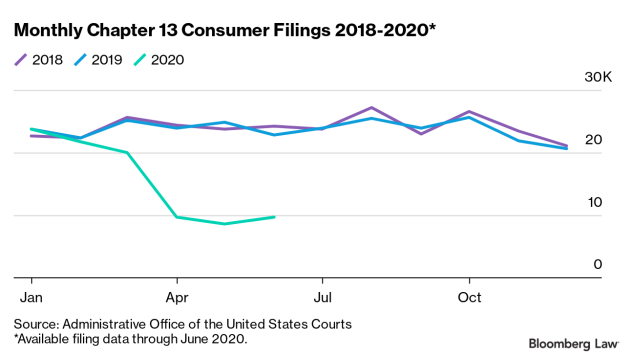 Chapter 13 is sometimes called the “wage earners” bankruptcy and is often used by debtors with regular income and modest assets, usually a home. While I could not find reliable numbers for the percentage of Chapter 13s filed to prevent foreclosure, many practitioners would agree that one primary reason for consumers choosing Chapter 13 over Chapter 7 is to save their homes. With more than 4 million homeowners taking advantage of mortgage forbearance, states instituting foreclosure moratoria and, until recently, enhanced unemployment payments, there is little incentive for consumers to run to bankruptcy court just yet.

A Peek Behind the Foreclosure Numbers

In 2009 and 2010, bankruptcy filings and foreclosures were at their highest numbers. Those years averaged more than 2.8 million foreclosures, while bankruptcies topped 1.4 million in 2009 and peaked at more than 1.5 million in 2010. As illustrated in the charts below, prior to the pandemic, foreclosure starts and default rates ebbed and flowed almost in sync. Since gone awry.

While monthly mortgage default rates have more than doubled in 2020 from 3.2% in January to 7.6% in June, monthly foreclosure starts have been sliced to nearly 20% of their pre-pandemic numbers, from more than 42,000 in January to 5,900 in June. Since the pandemic, monthly foreclosure starts have lingered at least 20,000-30,000 below where they were in 2019 and first-quarter 2020. But foreclosures of severely delinquent mortgages will have to be filed at some point. 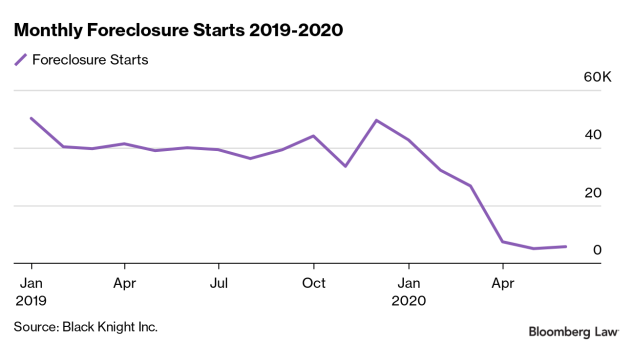 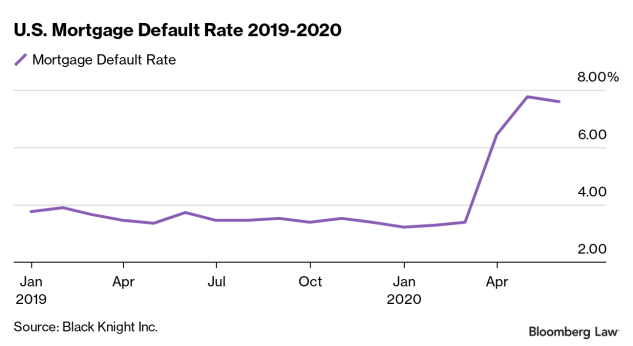 There is a deficit in foreclosures, and eventually there will be a correction. Even after the country emerges from the pandemic, however, Chapter 13 bankruptcy filing numbers could remain low. The rosier path forward involves Americans returning to work. We are a country of optimists, and I’m no different. My hope is that the economy and the job market will improve, and that a large number of the currently unemployed will return to work, find new jobs, or create their own opportunities. Many mortgage lenders are also working with borrowers in forbearance to tack the missed payments onto the end of the loans, avoiding exorbitant balloon payments. Also, though seeming less likely by the day, Congress and the White House could extend stimulus measures.

A less rosy path to fewer bankruptcies could materialize if we continue on a path of patchwork shutdowns, resulting in further layoffs and furloughs. One of the requirements for filing Chapter 13 is that the debtor must have regular income. With weekly initial unemployment claims hovering near 1 million, more Americans are becoming ineligible to file Chapter 13.

Also, it is often said that “it costs money to go broke.” This is especially true when “going broke” involves filing a bankruptcy case and the associated filing and attorneys’ fees. As the pandemic continues, families are running out of reserves and could be left with too little to even make it to the courthouse steps.

Now more than ever, it is impossible to make predictions. This pandemic has shown us that the variables can change wildly overnight. I cannot, however, resist the urge to try. I will continue to watch the bankruptcy filing rates, unemployment, mortgage default, and foreclosure rates, and any other numbers I can get my hands on to try to get some sense of where bankruptcies are headed.