An unusual proxy contest will come to an end on May 25 when the shareholders of Arconic, Inc. will cast their votes for directors of the company. Rival slates sponsored by the company and activist investor Paul Singer’s Elliott Management Corp. are competing for four seats on the board. A fifth candidate, Ulrich R. Schmidt, joined the board in February 2016 following nomination by Elliott Management.

This peculiar drama has seen the resignation under pressure of Arconic’s CEO, Klaus Kleinfeld, after he sent a letter to Singer, along with a World Cup soccer ball, last month. The letter appeared to suggest that Kleinfeld was aware of unflattering conduct by Singer during his visit to Germany for the World Cup soccer matches in 2006. The letter said in part that many witnesses:

“are still full of colorful memories about this obviously remarkable time; it indeed seems to have the strong potential to become lastingly legendary. How you celebrated your soccer enthusiasm and the ‘great time’ you must have had in your Berlin weeks—unforgettable without a doubt—left a deep impression on them.”

Kleinfeld’s letter concluded with a rather cryptic postscript stating that “[i]f I manage to find a native American Indian’s feather headdress I will send this additional essential part of the memories. And by the way: ‘Singing in the Rain’ is indeed a wonderful classic—even though I never tried to sing it in a fountain.”

Singer’s firm released the letter, with a note from the fund’s general counsel, Richard B. Zabel, stating that “[w]hile much of what it says doesn’t make sense, we do understand Dr. Kleinfeld to be making veiled suggestions that he might intimidate or extort Mr. Singer.” Zabel added that “[t]his is highly inappropriate behavior by anyone and certainly by the CEO of a regulated, publicly traded company, in the midst of a proxy contest, and it raises a number of obvious issues.”

Alcoa spun off its automobile and aeronautics parts operation last year into a new company, Arconic. Since then, Elliott has been reducing its stake in the new Alcoa Corp. while expanding its holdings in Arconic. Singer’s fund currently holds approximately 13 percent of Arconic’s shares. Elliott pitched “a new Arconic” with an “opportunity for real change” in a presentation directed to Arconic shareholders, while the company urged its stockholders to “keep Arconic strong” and to “protect your investment.” 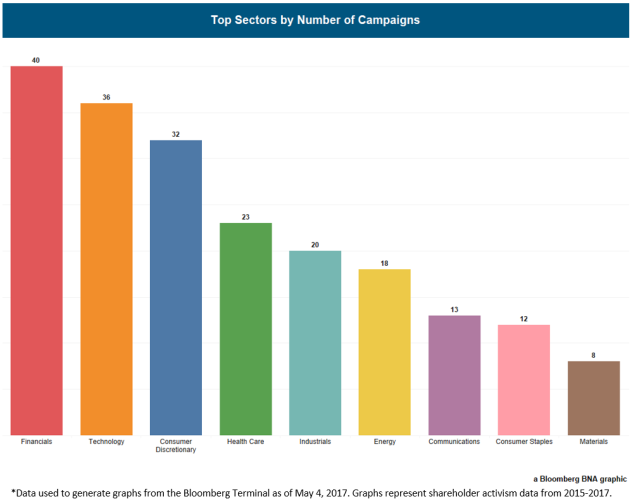 New activist investor analytics from Bloomberg Law indicate that Elliott Management’s flagship fund, Elliott Associates, Inc. has been the most prolific activist since 2015. While the fund generally targets technology companies, it takes positions across a wide range of market sectors. 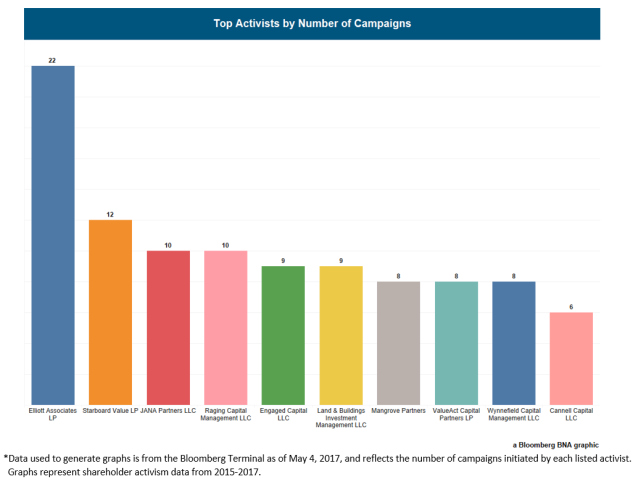 Activists have most often targeted financial firms and technology companies since 2015. Industrial companies such as Arconic have experienced only about one-fourth the number of campaigns as seen in the tech and financial sectors.