During these turbulent and challenging economic times, current public companies are increasingly likely to turn to follow-on offerings to meet their capital needs. ATM offerings, a type of follow-on offering where a publicly listed company sells newly issued shares at prices determined by the trading market, are a particularly good mechanism for companies to manage volatility risk, allowing them considerable control over the timing and number of shares sold to the public. 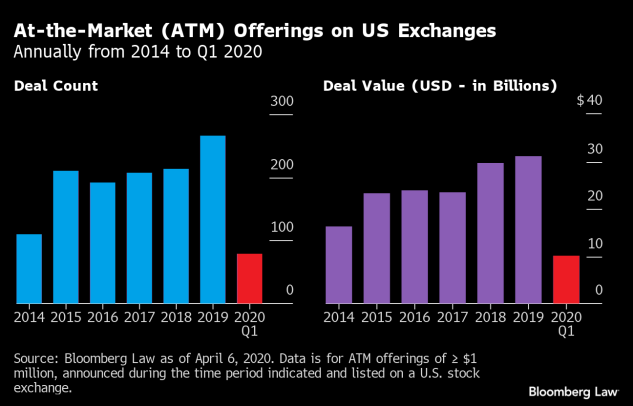 Companies completed 79 ATMs during the first quarter, raising $10.1 billion. Those figures put these offerings well ahead of the pace set in 2019 for both deal count and value. Last year saw 266 ATM offerings, raising just over $31 billion. Those 2019 results were the best year for ATMs in the last decade.

The three largest ATM offerings in first quarter 2020 were Healthpeak Properties Inc. ($1.25 billion), Atmos Energy Corp ($1 billion), and Alexandria Real Estate Equities Inc ($800 million). There were 27 offerings of at least $100 million and seven of those raised $500 million or more.