In the current market, when we talk about M&A, we know that what we’re talking about is in large part private equity M&A. A staggering $1.2 trillion in mergers and acquisitions transactions announced and pending or completed so far in 2021 have involved a private equity party.

This year-to-date dollar amount, which includes total buyouts, majority and minority stake purchases, and venture capital investments, is already equal to 2020’s total annual PE deal volume, and it represents 40% of global M&A volume in 2021 thus far. If this market share holds through the close of the year, PE’s 2021 share in the global M&A market will have markedly surpassed 2020 (34%) and 2019 (29%).

By total deal count, the ratio is similar: the 14,666 pending and completed 2021 PE deals announced so far make up 39% of the global M&A deal count.

Considering only M&A deals involving the acquisition of a controlling stake in a company or asset, year-to-date PE volume represents 32% of global volume.

In short, this M&A boom wouldn’t be a boom without private equity deal activity. And M&A lawyers certainly know this.

In 2021, 883 global private equity buyouts—takeovers for a 100% stake that involve a private equity acquirer—have been announced and are either pending (247 deals) or have been completed (636 deals). These PE buyouts have an aggregate value of $239.2 billion. Though we still have five months remaining in the year, this year-to-date PE buyout volume has already surpassed 2020’s total volume ($223.9 billion). And if the current pace continues for the remainder of the year, it is on track to surpass 2019 ($260.7 billion) and 2018 ($253.9 billion).

Looking at monthly totals, the volume of PE buyouts announced in July ($55.6 billion) is the highest monthly volume seen since the summer of 2007—marking “a return to abnormal,” as so aptly put by Bloomberg Opinion columnist Tara LaChapelle. Nearly all (859 out of 883) of these buyouts were all-cash deals. About 40 percent were cross-border deals. 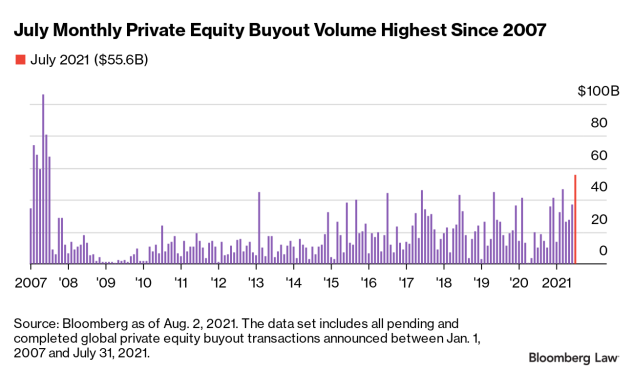 The regional breakdown of buyout targets by deal count so far this year is consistent with prior years: North America has the lead with 482 PE buyouts, followed by Europe with 282 deals. So far in 2021, both of these regions have achieved roughly three-quarters of their total PE buyout deal counts for all of 2020. 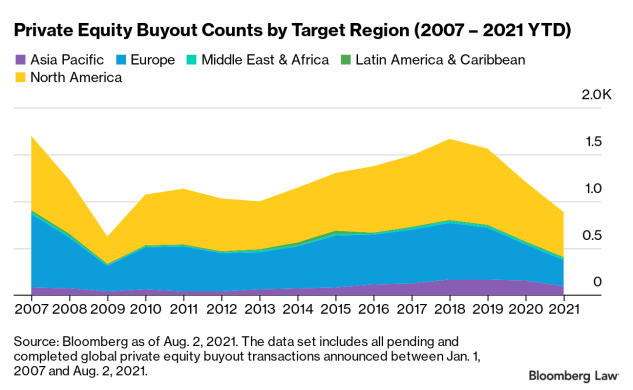 While buyouts have been drawing much attention because of their resurgence, investments by private equity—including minority stake purchases, additional stake purchases, and venture capital financing rounds—have also already broken records this year, with over $466 billion announced. Private equity investment volumes have been on a persistent upward path in recent years, and this year’s volume already surpasses all prior years on record, according to Bloomberg data. 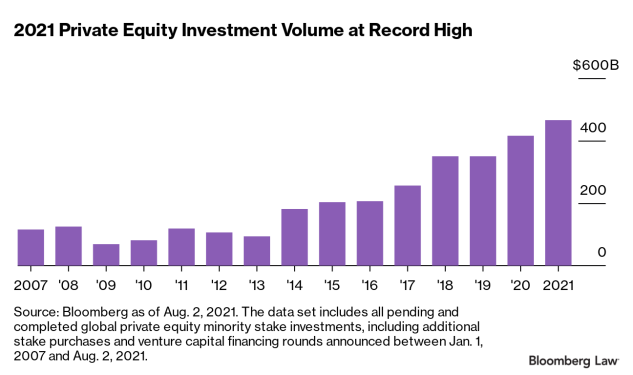 The vast majority of these investments, with an aggregate value of $308.7 billion, have an individual deal value equal to or less than $500 million.

Consumer, non-cyclical targets and technology targets have drawn the most private equity investment for majority and minority stakes combined this year. In the consumer, non-cyclical sector commercial services ($73.6 billion), healthcare products ($54.9 billion), biotechnology ($45.7 billion), food ($26.9 billion), and pharmaceuticals ($25.5 billion) targets have seen more than double the volume of private equity deals seen in the same period last year. In tech, software targets have taken the lion’s share with $210.9 billion in deals, which, in turn, has mostly consisted of deals involving applications software targets ($108.7 billion). Both software overall and applications software volumes have more than doubled compared to the same period last year.