Special purpose acquisition companies (SPACs) are entering into agreements to merge with private targets (“de-SPAC” transactions) at a steady pace. But based on the number of active SPACs still seeking targets, this pace could prove too slow. 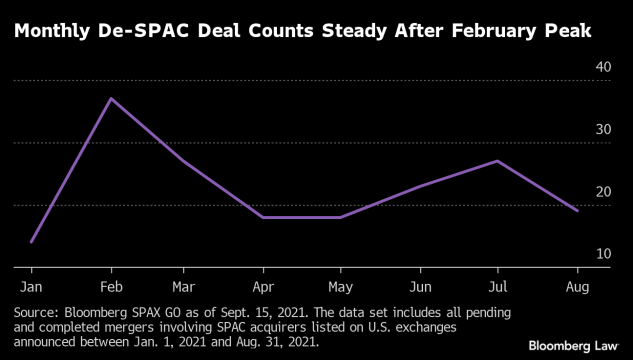 According to Bloomberg’s SPAX <GO> data as of Sept. 15, 445 trading U.S. SPACs have yet to enter into a definitive merger agreement to take over a private target, and have yet to be associated with any pre-agreement deal announcements (i.e., rumored or proposed deals). A total of 121 SPACs are parties to pending de-SPAC deals, and 23 SPACs are associated with proposed or rumored deals that could become pending in the future. 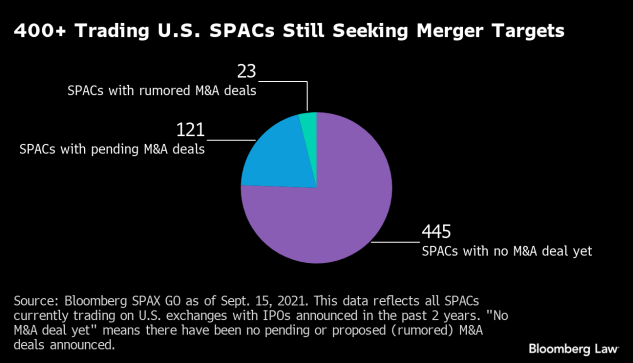 SPACs typically have a limited time period (between 18 and 24 months) in which to find and merge with a private target. Math says that at the current rate of 22.8 deals per month, it would take more than 19 months for all 445 SPACs now actively seeking targets to get their deals done. Given that many of these SPACs didn’t go public yesterday (in fact, 99 of them went public in 2020), this deal pace could potentially leave some SPACs cutting it close with their time requirements. And even though the incoming flow of SPAC IPOs has slowed, it hasn’t stopped, so new SPACs going public will only present more pressure and competition for SPACs searching for deals.

Bloomberg Law subscribers can find related content on our M&A Deal Analytics and our In Focus: SPACs resources.