This was supposed to be s big year. There were plans for a blockbuster share listing and expansion of a new ultraluxury holiday business. Instead, a global pandemic , and the company had to sack 25% of its workforce, or about 1,900 employees.

Those , announced in May, weren’t the worst of it. Questions are swirling around Airbnb’s culture after it was reported that about 500 contract workers were quietly let go two weeks earlier, without any of the perks or fanfare—many of them people of color. The move clashed with how Airbnb likes to portray itself. Its slogan is “Belong Anywhere,” and it’s made prominent donations to the Black Lives Matter movement. After ’s death in Minneapolis, Airbnb sent a message to its U.S.-based hosts and guests urging them to watch the video of the killing even if it made them uncomfortable. The overall message: Be an active ally.

The San Francisco-based company isn’t a stranger to issues of racial discrimination. White hosts have been called out for not renting properties to people with Black-sounding names. Airbnb has even been taken to court by users claiming they were denied stays because of the color of their skin. Until now, the criticism has centered mainly around Airbnb’s rental platform rather than the company itself. Airbnb’s cuts to its full-time staff got a remarkable amount of positive coverage as layoffs go, thanks to measures that included generous severance packages and the creation of an online talent directory for prospective employers to browse. 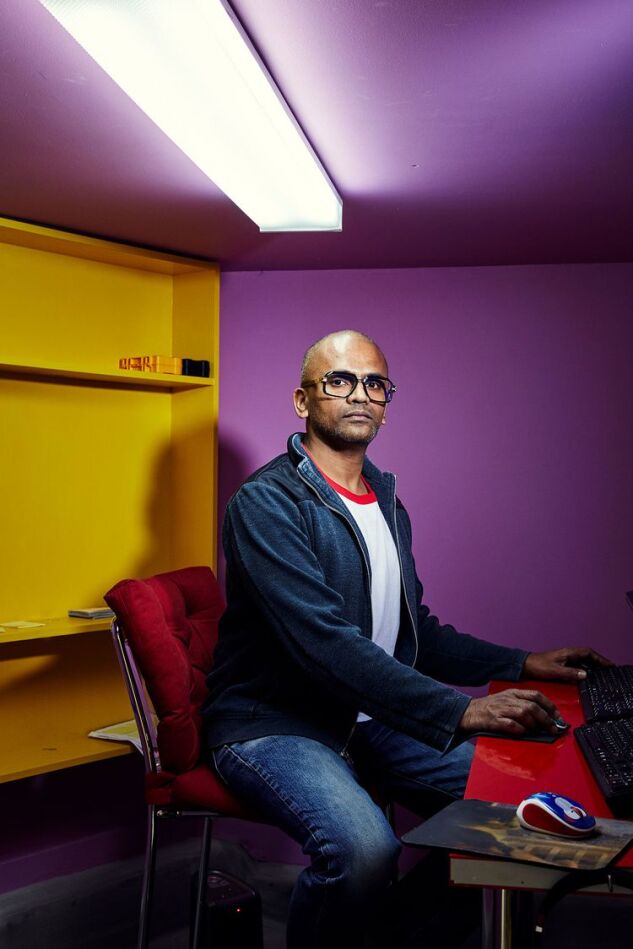 Former contract workers have had a very different experience. Shiva Kumar was one of those who lost a job. The 45-year-old had been helping Airbnb expand its business travel listings for about 12 months. While he says the company is more diverse than other tech companies he’s worked for, he noticed a huge proportion of the minority staff he encountered were contract hires. “Technology is primarily a male-dominated field and, within that, White male-dominated,” Kumar says. “Men of color like me, or other Indians, Pakistanis, Filipinos, Chinese, while being a good majority of the workforce in any tech company, are very commonly underpaid and exploited.”

A woman of color who was hired as a contractor recalls pulling aside a fellow woman of color on her second day. “Gut-check me here,” she remembers saying. “I’m noticing that all the contractors are people of color, and most of the full-time employees are White.” Her colleague whispered agreement. “The branding is all about belonging, but that’s not how you feel. Airbnb is the most hypocritical company I’ve ever worked for,” the contractor says. Like several of the more than 20 former Airbnb contractors Bloomberg Businessweek interviewed, she declined to be identified publicly to avoid jeopardizing future job prospects.

Part of the problem is the way technology companies structure their workforces. is common in Silicon Valley and at multinationals the world over. It over their cost base, allowing them to scale up quickly in good times and scale down fast in bad. Contractors aren’t actually employed by the tech companies themselves—and don’t qualify for the . Instead, they’re hired and fired by third-party companies whose names the general public wouldn’t recognize. Contractors may work in the same offices as their full-time counterparts, but they’re often distinguishable in some way, either through differently colored lanyards or security badges. They may not have the same level of access to computer systems and are sometimes excluded from internal meetings, depending on what’s being discussed. Other tech titans such as and have faced similar criticism for building a “shadow workforce” of people who are typically cheaper to hire and can be when business sours.

“This pattern is very common in the tech industry, and it’s been common for decades,” says Chris Benner, a professor at the University of California at Santa Cruz who’s studied racial inequality in Silicon Valley for more than 20 years. In a 2016 study he found that in Santa Clara County—the home of Alphabet, Facebook, and Tesla—African Americans and Hispanics made up only 7% of high-skill direct hires at tech companies. But they accounted for 26% of so-called white-collar contractors, such as secretaries and sales representatives, and more than half of blue-collar contractors, such as security guards and janitors.

In Airbnb’s case, the contractors who were let go were employed by The contingent workforce management provider didn’t respond to requests for comment. Airbnb’s global head of diversity, , acknowledges that there are concerns around the higher percentage of contract workers who are people of color. She says Airbnb is actively working toward ensuring underrepresented ethnic minorities have agency and decision-making powers internally. Chief Executive Office is “very adamant that we’re not going to do lip service,” she says. “Our mission is belonging, and we have to actually act and be a model for that.” She adds that the percentage of Black full-time workers at Airbnb remained at about 4% even after the layoffs.

After Bloomberg Businessweek approached Airbnb about this story, the company said in a blog post that 20% of its board and executive team will be people of color by the end of 2021. Internally, teams are being given recruitment and retention goals for minority staff that must be met by 2025. Different security badge colors for contractors are also being eliminated.

That’s little comfort to those who’ve already been laid off. Amy Silverman had worked as a senior photo editor at Airbnb for about a year before her contract role was eliminated. Afterward, she wrote a post on LinkedIn criticizing Airbnb for not including laid-off contract workers in its talent directory. (The company subsequently did include them, but it still highlighted their employment status as contractors.) More than 1,300 people hit “like” on her missive. “The hardest thing,” she says, was “seeing all that positive press and knowing we were totally invisible.”

To contact the author of this story:
in New York at ocarville1@bloomberg.net

To contact the editor responsible for this story:
at knicholas2@bloomberg.net