Due to the Russian attack, Ukrainians wait to leave the city and the country at the train station on March 31, 2022 in Lviv, Ukraine.
Photo by Cem Tekkesinoglu/ dia images via Getty Images

Global law firms that announced plans to close Russia offices after the Ukraine invasion now face the challenge of carrying out their goal while complying with labor, immigration and sanctions laws.

Employers that want to fire employees in a closure must navigate a Russia law that generally bars dismissing certain worker classes, such as single mothers, according to labor and employment law firm Littler Mendelson.

Those that want to help Russian lawyers leave the country and work elsewhere are limited to traditional pathways such as tourist visas and asylum applications, the firm said. Russia does not have the same emergency measures put in place to aid emigrations from Ukraine.

At least 25 law firms announced plans to shutter their Russia offices in the weeks following the Feb. 24 invasion, including some that said they’re converting the outposts into independent operations. Many cited the shock of Russian leader Vladimir Putin’s military actions against Ukraine in making the moves.

As of April 4, a total of 1,430 civilians have been recorded as killed in the Russian invasion, according to United Nations statistics. More than 10 million Ukrainians have fled for neighboring countries or are believed to be displaced inside the country.

Firms in lamenting the Ukraine tragedy also voiced a sense of loss in severing ties with colleagues in Russia that in many cases go back decades.

Agnieszka Fedor, head of the labor law practice group with Sołtysiński Kawecki & Szlęzak in Warsaw, Poland, said she was saddened in trying to get in touch with colleagues from Russia law firms after the war began.

“Some of them did not respond,” she said in an email. “Some of them seemed ready to talk,” though only on messaging apps WhatsApp and Telegram.

Even those lawyers later ceased communication and “disappeared,” Fedor said. “Like they did not exist. And some of them are good colleagues of mine. Very surprising. And sad.”

U.K. firm Linklaters’ March 4 announcement that it would close its Moscow office and “wind down” operations in Russia started a chain reaction of similar pledges by firms in the following days and weeks.

Allen & Overy, also a U.K.-founded firm, announced its “wind down” March 10 and said it “will be managed in line with all legal, regulatory and professional obligations.”

The firm said in a statement updating its progress that the “vast majority” of its 55 people in Moscow, including 27 lawyers, are Russian “and are not planning to leave” the country.

“We are doing everything we can to support them and where possible will redeploy them to work with other A&O offices,” Allen & Overy said.

Dentons said March 14 it would separate from its Moscow and St. Petersburg offices, which will operate as an independent firm. The offices have more than 250 people.

“We will continue to support our people and clients throughout the transition,” the firm said in a statement updating its progress. “Following the separation, the teams in Moscow and St. Petersburg will continue to serve the legal needs of clients in Russia under a new name and brand.”

Baker McKenzie in a March 15 statement said it would turn its Russia offices, with 260 people, into an independent law firm. A spokesman declined additional comment.

DLA Piper said March 14 it will no longer have offices in Moscow and St. Petersburg and “transfer the Russian business to our team there.” A firm spokesman declined to provide any additional comment.

Spokespeople for Clifford Chance, which said March 10 it was closing its Russia operations, and Freshfields Bruckhaus Deringer, which made a similar announcement on March 9, did not reply to questions about the status of their efforts.

Morgan, Lewis & Bockius said March 9 statement it would wind down its operations in Moscow, though many of its lawyers there will continue with the firm in other jurisdictions. A firm spokesperson declined additional comment.

More than 1,250 lawyers and staffers in total are affected by the Russia office actions, according to the announcements from 25 firms. 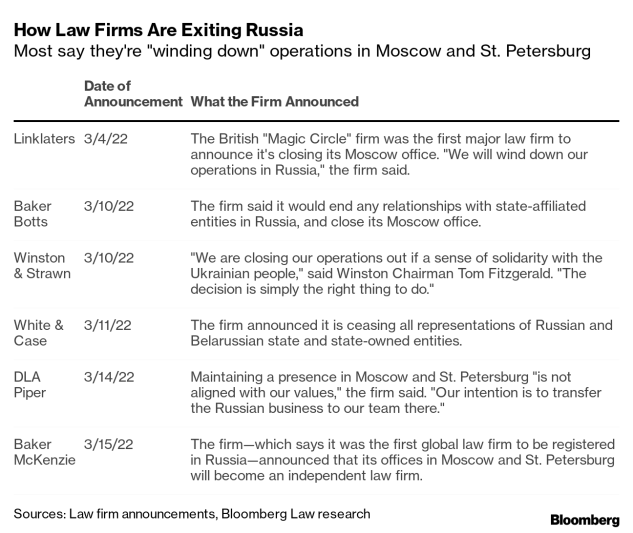 Law firms and other employers that want to conduct mass closures or layoffs in Russia need to know that the country’s employment law “imposes significant obligations” on them, according to a Littler Mendelson client advisory. There also must be written notices to employees and government agencies, it said.

Failure to follow the procedures may result in a court reinstating the employee and ordering the employer to pay the average salary for the period of the forced unemployment, the advisory said.

As for paying employees in Russia, “there is no easy answer,” Littler Mendelson said. “The multi-lateral web of sanctions imposed by certain, mostly Western, countries, coupled with the Russian government’s own counter sanctions, have heavily restricted cross-border payments.”

Will They Be Back?

Firms leaving Russia are likely calculating whether they can return there someday, said David Wilkins, director of Harvard Law School’s Center on the Legal Profession, in a written statement.

Those decisions “will probably depend upon what—if any—peace deal is struck and whether the firms either can or want to go back to doing Russian work,” Wilkins said.

While severing Russia ties is a complex task, firms realize that continuing their operations there carries risk, said Ralf Peschek, a partner with Wolf Theiss in Austria.

“For law firms, it’s a very tough situation,” Peschek said. “If they stay in Russia, they could lose business. And they may face reputational risk.”