The Covid-19 crisis has largely affirmed the power government officials have to set restrictions to protect public health in almost all respects except one: religion.

The Supreme Court knocked down state constraints on indoor worship services and blocked strict limits on the number of people who can attend them in rulings that could forever change the scope of public health authority and public health law.

Religious challenges to public health measures are now shifting from restrictions on gatherings to mask and vaccine mandates at a time when new guidance and requirements from the federal government are strengthening such measures. The disputes making their way through the courts now are likely to test the bounds of religious liberty and just how far the Supreme Court is willing to go to protect it, health law scholars say.

“There’s going to be a lot of cases that try to push the religious exemption as far as it can go,” said Dorit Reiss, a professor of law at the University of California Hastings College of the Law in San Francisco.

In the past week, the Justice Department said in a memo that the emergency product status of the coronavirus vaccines doesn’t prohibit employers, universities, or other entities from mandating vaccinations. The U.S. Centers for Disease Control and Prevention reversed earlier guidance on indoor masking for those who are vaccinated, saying that people in high transmission areas and in schools should wear masks inside. And President Joe Biden is planning on requiring all federal workers to get a Covid-19 vaccine or submit to frequent testing.

Those actions strengthen the legal ground employers and schools have to require face coverings and inoculations, but they won’t quash religious objections.

In the District of Columbia, a lawsuit filed July 12 challenges a new city law born out of the pandemic that allows minors 11 years of age and older to consent to a Covid-19 vaccine without their parent’s permission. Four parents of minors argue the law violates their legal and constitutional rights to claim a religious exemption to the vaccine on behalf of their children.

The U.S. Court of Appeals for the Sixth Circuit heard arguments last week in an appeal a Catholic school and a few parents brought after a lower court refused to block a Michigan mask mandate for their students in kindergarten through fifth grade. That mandate has since been withdrawn, but the litigation is ongoing. The school and parents say the mandate could be reinstated and unconstitutionally interferes with the free exercise of the students’ religion because every human is “made in God’s image and likeness” and masks shield that image.

Challenges like that are seen by some as pushing the envelope on valid religious objections.

“It seems like people are discovering religious beliefs that they didn’t seem to have before the pandemic, and I think we will see a lot more of that as vaccine mandates come into effect maybe in public-employer settings, universities, and public schools,” said Elizabeth Sepper, a religious liberty and health law professor at the University of Texas at Austin School of Law.

For the most part, courts have been unwilling to scrutinize the sincerity of religious objectors beyond prisoners, but “that might change,” she said.

“It’s more appropriate when we’re looking at issues of constitutional rights to flip it and look at whether the government has established a compelling interest in a uniform rule,” said Andrea Picciotti-Bayer, director of the Conscience Project, a nonprofit that’s focused on religious freedom and conscience rights.

“When the government does restrict religious freedom, just like any other civil right, it has to be able to show the basis for doing so,” she said.

In the cases dealing with the Covid-19 pandemic restrictions this past year, Picciotti-Bayer said, “the Supreme Court in general has been pushing to say, ‘We want to give deference to health officials and state officials, but it cannot be a blind deference. There needs to be more proof out there if you are going to restrict these important constitutional rights.’”

She noted the Supreme Court’s November opinion in Roman Catholic Diocese of Brooklyn v. Cuomo, in which the majority said Supreme Court justices are not public health experts and should respect their judgment “but even in a pandemic, the Constitution cannot be put away and forgotten.” In that case the court temporarily blocked New York limits on in-person religious services. 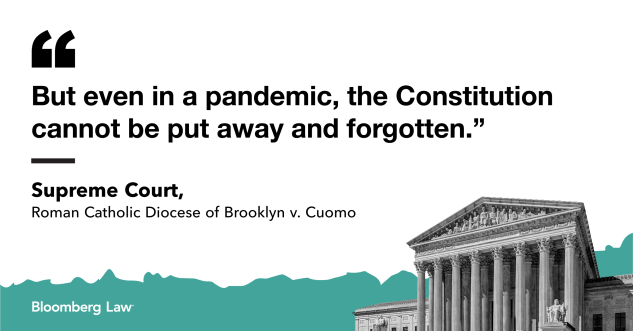 The next wave of religious legal challenges to come before the court are likely to center on vaccine mandates. Liberty Counsel said it is preparing lawsuits now.

The issue will no doubt go to the Supreme Court, perhaps on an expedited basis, said Mat Staver, founder and chairman of the nonprofit litigation, education, and policy organization that’s working to advance religious freedoms. Several of the religious liberty cases that have come before the high court during the pandemic have been brought by Liberty Counsel.

“I think at the end of the day we will ultimately prevail,” he said.

The religious challenges to restrictions on gatherings, mask mandates, or vaccine requirements mostly boil down to discrimination claims.

“If we’re thinking about whether government restrictions discriminate against houses of worship, or gatherings and activities for religious purposes, then the question is how is the government treating other activities and facilities that pose a similar risk,” said Lindsay Wiley, a public health law professor at American University Washington College of Law.

What that comparison should be is where the justices disagree, she said.

In May 2020, Chief Justice John Roberts joined the court’s liberal bloc in refusing to lift California’s 25% capacity limit on places of worship. In that opinion, he said the restrictions were equal to those on concerts, movies, and spectator sports. He drew the line at grocery stores, banks, and laundromats, calling them dissimilar activities “in which people neither congregate in large groups nor remain in close proximity for extended periods.”

In a dissenting opinion, Justice Brett Kavanaugh, however, suggested that houses of worship and grocery stores are one in the same, asking, “Why can someone safely walk down a grocery store aisle but not a pew?”

When Justice Amy Coney Barrett was confirmed to the bench, the court’s ideological makeup was pushed even further to the right. Law scholars say that’s when the court started lifting restrictions in California and New York, and the test for religious exemptions seemed to shift.

In curbing California limits on at-home religious services, Sepper said the Supreme Court seemed to suggest if there’s a secular exemption in a law, then there’s a viable argument there should be a religious one too.

“If that’s the legal standard, the viability of some of these claims will depend on what the public health order looks like or the law looks like,” she said. “Are there exceptions? Are they the same kinds of exceptions? It makes it more fact bound.”

Some law scholars fear the Supreme Court rulings on Covid-19 pandemic restrictions and requirements could put all kinds of health, safety, employment, and civil rights protections at risk.

“This really pushes cautious government officials toward a very hands-off approach to houses of worship, religious organizations, or individuals who argue they have a religious objection to complying with the law,” Wiley said.