Artificial intelligence can save time and money for attorneys.

Only about one in four people working at law firms and law departments that use legal technology use tools based on artificial intelligence or machine learning, according to a survey of lawyers, technologists and executives.

More than half of the total respondents to a new Bloomberg Law survey —54 percent— said they don’t use AI or machine learning tools. A quarter said they didn’t know if they use them—which survey authors said could reflect a knowledge gap and an underuse of valuable technology.

There may be people at law firms and in-house counsel offices who are using different legal tech tools, “but aren’t sure what they’re using” or how the tech is actually supposed to function, said Molly Huie, team lead for data analysis and surveys at Bloomberg Law.

Among those using machine learning or AI-enhanced tech inside law firms and law departments, 47 percent said they used such tools for document review, the survey found, and 41 percent used them for e-Discovery, two of the earliest law firm uses of AI-enabled technology.

Over the last several years, law firms have begun to use AI-infused tools for a range of tasks, including reviewing documents and crafting contracts, conducting legal research and background checks on would-be jurors, and speeding human resources functions like billing.

The survey was conducted online in April and drew 487 responses. Almost three in four of those polled worked for law firms, including a handful of solo practitioners, with the remaining from corporations or other non-law firm entities. 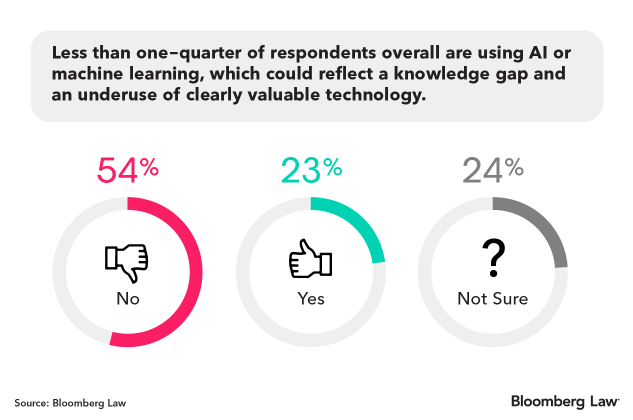 “First, we know that adoption takes years in the legal market,” Friedmann said in an email.

“Second, these results include a substantial number of smaller legal organizations,” he said. “Other surveys have found a correlation between firm size and adoption rates. Third, there are undoubtedly knowledge gaps, but knowledge alone won’t overcome adoption challenges.”

This slow acceptance of tech doesn’t appear to be in the best interest of attorneys, the survey results show. One in four law firm respondents noted that their books of business had grown as a direct result of the adoption of legal tech.

Huie noted that about half of the respondents said they were well prepared in general for the demands of increased technology use. This may be why only a quarter of those polled said their firm had taken on new clients as a result of tech adoption.

More than half of respondents from in-house counsel offices, 55 percent, said the chief barrier to adopting technology at a faster pace is a lack of funding. Law firm-based respondents blamed a lack of “tech savvy” in their workforces as their top obstacle.

Of the half-dozen reasons both groups listed as keys to why they couldn’t keep up with the technical times, the next most popular explanation was that they were too busy to learn new systems.

“Lawyers have no problem finding reasons not to adopt new tech,” said Friedmann.