The newly announced Alphabet Workers Union, as more than 200 employees of Google and parent company Alphabet Inc. are calling themselves, appears unlikely to seek formal recognition by Alphabet through the National Labor Relations Board process, at least in the near future. That’s understandable for a couple of reasons.

For one thing, it hasn’t been easy for unions to make board-certified bargaining units out of information-industry workers.

The NLRB has received only 247 representation petitions from information industry workers in the past five years combined. (Across all industries, about 1,800 petitions are filed per year.) Only 51% of those petitions ended in a union win (which is about par for the course, overall). And nearly all those wins have been in telecom companies, non-internet publishers and broadcasters, and movie studios. Cyber-based information companies such as Google are seeing only a tiny sliver of organizing activity. Unions have virtually no foothold here. 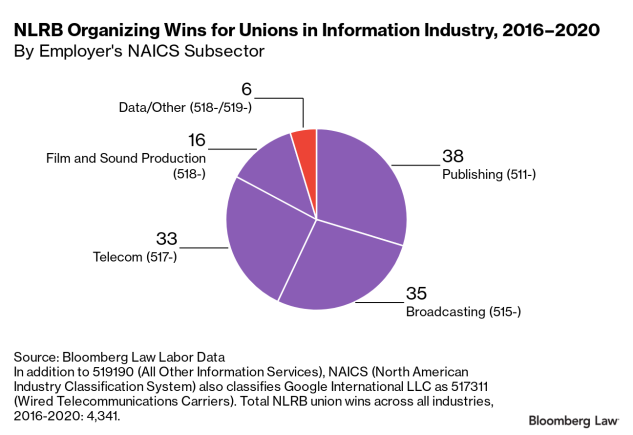 Beyond the lack of a template for success, there’s another reason to keep things informal. The fact is, simply by joining together as a group, Google’s workers are engaging in concerted activity that’s protected under Section 7 of the National Labor Relations Act. This protection gives them some of the powers that unions already have, such as—at least on paper—the ability to protest workplace practices without being fired.

But it’s also true that Section 7’s protections apply anytime two or more workers act jointly to improve working conditions, regardless of whether they announce themselves as a “union” or as anything else. And perhaps more importantly, the NLRB has never held that an employer must bargain with groups that don’t represent a majority of workers in a defined bargaining unit. It would take new board law to force a company to negotiate with a minority union, like the Alphabet Workers Union, over the terms and conditions of employment and potentially form a labor contract.

By calling themselves a “union” without formal recognition, Alphabet’s workers have a pretty narrow needle to thread: leveraging the power that the label invokes, while avoiding the bar that unions have to clear to truly wield that power.