I know I just used this opening line a few posts ago, but 2017 was truly a remarkable year in SEC enforcement. The previous year saw existential constitutional challenges to administrative enforcement, and the Supreme Court dealt a major blow to Commission requests for disgorgement in Kokesh v. SEC. Several significant open questions remain about the Kokesh decision that could have a profound impact on the future of the SEC’s enforcement program.

In Kokesh, the high court, rejecting the SEC’s claims that disgorgement orders are remedial in nature, found that the remedy acted as a penalty. Accordingly, the court held that SEC claims for disgorgement are subject to the five-year statute of limitations in 28 U.S.C. §2462 applicable to “any civil fine, penalty, or forfeiture.”

Several immediate impacts of Kokesh are apparent. Disgorgement is a highly effective blunt instrument in the SEC’s enforcement arsenal. Under long-established case law, the SEC only needed to provide a reasonable estimate of a defendant’s ill-gotten gains in order to support a disgorgement order. The burden of proof then effectively shifts to defendants to demonstrate that the SEC figure is not reasonably related to gains from their misconduct. This is a difficult standard for defendants to meet because the SEC is not held to a mathematical degree of precision with regard to their estimates.

Under a provision in the Exchange Act, the Commission may also recover prejudgment interest on disgorgement awards (interest awards are generally not available for fines or penalties), and can reach funds held by so-called relief defendants, third parties who are not necessarily wrongdoers but who are in possession of ill-gotten gains. Multiple wrongdoers may also be found jointly and severally liable to pay disgorged amounts, while penalties are personal and specific to the individual. Defendants with deep pockets will have a particular incentive to settle claims to avoid being left on the hook for the entire disgorgement amount.

The financial cudgel of disgorgement, with the ability of the SEC to reach back through many years of misconduct to recover several years of illicit profits, provided the Enforcement Division with a significant negotiating advantage in settlement talks. The potential financial exposure faced by defendants in long-running schemes could be enormous. After Kokesh, however, when the meter stops running after five years, the SEC’s bargaining chip suddenly becomes much smaller. 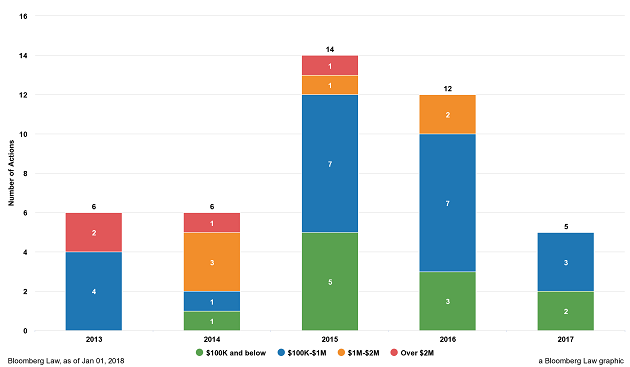 A five-year limitations period may also practically change the way the SEC will litigate cases. Some actions, such as those brought under the Foreign Corrupt Practices Act or complex financial fraud matters, may take years for the Commission to investigate and unravel before the staff can compile a case that is ready to present to a district court. A ticking limitations clock adds tremendous pressure on a resource-challenged division to bring cases as soon as possible, or risk missing out on significant recoveries. The same is true of even more routine cases. As a litigant, the SEC prefers to take the time to thoroughly prepare its cases before filing in order to increase the likelihood of settlement and preserve scarce resources. The five-year “shot clock” on the SEC’s most effective remedy may well force the division’s hand on these cases as well.

The Supreme Court turned more than a few heads with Footnote Three to its unanimous opinion. According to the Court:
“Nothing in this opinion should be interpreted as an opinion on whether courts possess authority to order disgorgement in SEC enforcement proceedings or on whether courts have properly applied disgorgement principles in this context. The sole question presented in this case is whether disgorgement, as applied in SEC enforcement actions, is subject to §2462’s limitations period.”

What they didn’t say, particularly with regard to “whether courts possess authority to order disgorgement in SEC enforcement proceedings,” is quite an interesting question due to the history of SEC disgorgement orders in federal district court cases. Disgorgement in securities cases dates back to a 1971 Second Circuit case, SEC v. Texas Gulf Sulphur Co. The appellate court held that the court, in the exercise of its general equitable powers, could order the surrender the ill-gotten gains. According to the court, “the SEC may seek other than injunctive relief in order to effectuate the purposes of the Act, so long as such relief is remedial relief and is not a penalty assessment.” In the 45-plus years since the Texas Gulf Sulphur decision, the authority of federal courts to order disgorgement has been accepted as doctrine, and the SEC and the courts have made these orders routine in enforcement practice.

There is, however, a rather significant catch that may bring Footnote Three into play at some point in the future. While Congress has specifically disgorgement orders in SEC administrative actions, no such statutory authority exists with regard to cases brought in federal courts. It is likely that Congress saw no need to specifically authorize the remedy when it had been recognized at equity for decades, but the Kokesh ruling may be problematic. Defendants will undoubtedly raise the question going forward that the Supreme Court left unanswered on extending the ruling beyond the limitations question.

In SEC v. Brooks, an August 2017 decision, the U.S. District Court for the Southern District of Florida showed little inclination to expand the Kokesh holding beyond the limitations period context. The case involved a rather unique fact situation, in which a fraud defendant died in prison. The defendant’s representative claimed that any disgorgement claim would be punitive and would be abated by the defendant’s death. According to the SEC, the request for disgorgement was remedial and would not be subject to abatement.

The district court showed little interest in expanding the Kokesh holding beyond the limitations context. The court observed that: “Kokesh’s holding cannot be plucked from the statutory context that gives it force. Kokesh is about statutes of limitations, and its holding is embedded in this context … at every step of the analysis, the Court reinforces it is discussing penalties in the context of a specific provision and for statute of limitations purposes (internal citations omitted).”

Similarly, in November 2017, in SEC v. Sample, the U.S. District Court for the Northern District of Texas specifically rejected a challenge to its authority to order disgorgement. According to the court, “Kokesh had no effect on how courts apply disgorgement principles.”

Pending circuit court and Supreme Court review down the road, the somewhat constrained authority of the SEC to seek disgorgement appears to be safe. One might be tempted to ask, with a potential threat to its disgorgement authority in the courts, why the Commission doesn’t choose to bring cases with the potential for sizeable disgorgement recoveries in administrative proceedings rather than in court.

Even in the case of a direct challenge to the SEC’s disgorgement authority in court, reliance on the administrative forum is not a cure-all. First of all, administrative enforcement is facing serious court challenges of its own, as the Supreme Court will consider the impact of the SEC’s selection of administrative law judges under the constitution’s appointments clause. Secondly, the optics of regular reliance by the SEC on its “home court” tribunals to obtain big money disgorgement orders could well be untenable for the agency.

The Supreme Court dealt the SEC a significant setback in imposing the five-year limitations period for penalties on its disgorgement authority. Defendants may well have a disincentive to settle enforcement claims on terms favorable to the Commission because they could be facing substantially reduced financial exposure.

To date, lower courts have not taken an expansive view of the questions left open in the high court’s Footnote Three, but litigants will continue to challenge the SEC in this area. With Supreme Court action coming on ALJs, and challenges to disgorgement authority expected to continue, the stage is set for 2018 to also be a remarkable year for the SEC’s enforcement program.