Deregulation has created a substantial and profitable U.S. cannabis industry. But while now a multi-billion dollar industry, and more or less legal in 48 states, cannabis is still not just another agricultural product.

Cannabis innovation and investment are booming, but existing restraints on a range of laws—including employment, banking, and interstate commerce—persist. And an emerging health crisis is creating new liabilities.

As a consequence, cannabis businesses still operate in a degree of legal limbo, keeping business risks high and providing myriad advisory opportunities for entrepreneurs, lawyers and other specialist advisors.

The SAFE Banking Act and the Vaping Health Crisis

The SAFE Banking Act bill, if enacted, will expand the ability of banks to provide financial services to cannabis businesses and service providers and grant a safe harbor to U.S. entities serving the hemp industry.

In response to the vaping public health crisis, the Senate Committee reviewing the legislation may revise the bill to address public health and safety concerns stemming from vaping products containing tetrahydrocannabinol (THC), which have been identified by the CDC as linked to the health crisis. State and federal regulation of cannabis products, businesses, and deals in the industry, may also be modified to respond to these health concerns.

Lawyers see cannabis as a fertile new practice area. In addition to the growth of boutique cannabis-focused firms, 85 of the AmLaw 100 firms mention “cannabis” on their websites, although only 17 top 100 firms have formed a stand-alone cannabis practice thus far. With an array of legal issues spanning regulatory, transactional, and litigation groups, cannabis practices align with many global law firms’ interdisciplinary expertise.

How should lawyers advise clients about activities that are legal in many states, but illegal under federal law? In recent years, several states have revised their ethics rules to clarify that when a lawyer advises a client about conduct under state laws, they must also advise about conflicting federal law. More states may follow.

And there may be greater discussion about the prohibition on lawyers assisting clients in conduct that is illegal versus criminal.

Mergers, acquisitions and investment activity involving cannabis entities has reached unprecedented highs in 2018 and 2019, reaching up to $4 billion quarterly, and looks to continue. The third quarter’s $3.8 billion deal volume is nearly double that of 2016 and 2017 combined. 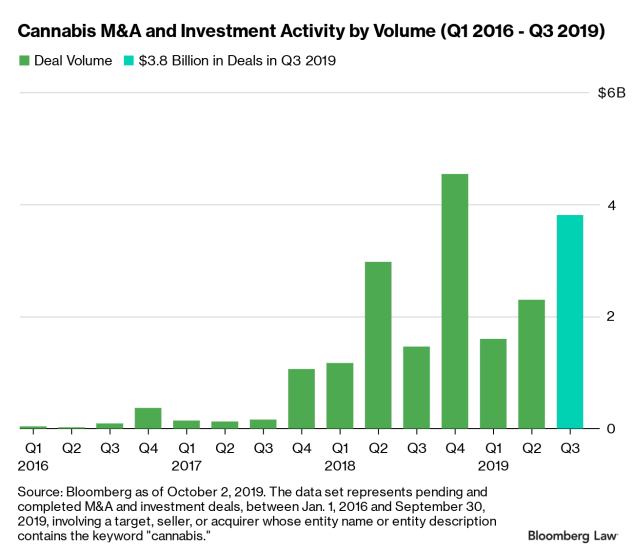 Because Canada has legalized cannabis nationwide, businesses operating there benefit from a clear legal framework. Unsurprisingly, for 2018 and 2019 (through the third quarter), 727 out of the 744 pending and completed global cannabis deals involved Canadian and U.S. businesses. Looking just at cross-border cannabis M&A involving U.S. and Canadian parties, an overwhelming 87% involve Canadian acquirers investing in U.S. targets. 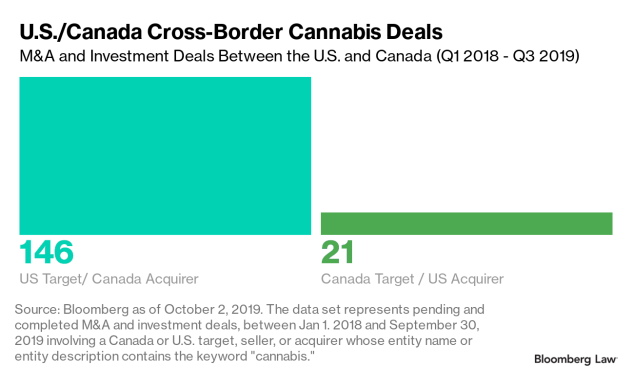 Some state laws prohibit the possession of cannabis and do not distinguish industrial hemp, some of which is used for cannabidiol (CBD) production, from other types of cannabis. This has led to conflicting state and federal enforcement. This issue has reached the Ninth Circuit Court of Appeals, and the USDA has weighed in on the issue through a memorandum.

On Oct. 31, 2019, the USDA also issued long-awaited interim rules that aim to resolve the interstate commerce problem. The interim rules reiterate language found in the Agricultural Improvement Act of 2018 (the “2018 Farm Bill”), stating that no state “may prohibit the transportation or shipment of hemp or hemp products lawfully produced.” One of the problems identified in this round of regulation is that “law enforcement does not currently have the means to quickly verify whether the cannabis being transported is hemp or marijuana.” These new rules aim to “assist law enforcement in identifying lawfully-produced hemp versus other forms of cannabis that may not be lawfully transported in interstate commerce.” We will be watching how this latest legal development is implemented in practice in the new year.

Over the past five years, publication of cannabis patent applications has continued to rise: There were 178 publications in 2013, rising to 618 in 2018, and 773 through just over nine months of 2019. The applicant pool has grown in number and diversity as well; the percentage of publications by the top filers represents a steadily declining percentage of the total applications. 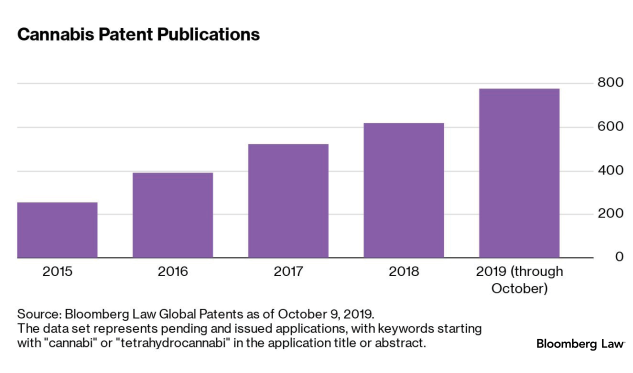 As recently as 2008, just five corporate groups and the U.S. government accounted for 25% of all cannabis filings. At that time, mention of cannabis within a patent application was largely lumped in with alcohol and other drugs—as a social ill to be remedied.

In terms of patent ownership, the GW firms, GW Pharma Ltd and GW Research Ltd, have collectively dominated the cannabis space for the past decade, as both top recent and over-all patent owners. More recently, five new firms have emerged as top cannabis patent owners—firms that, while top owners in the past three years, barely registered in this market in many prior years. Along with the GW firms, Teewinot Life Sciences Corp, Canopy Growth Corporation, Axim Biotechnologies Inc, Zynerba Pharmaceuticals Inc, and NC3 Systems have more recently joined the list of top cannabis patent owners. 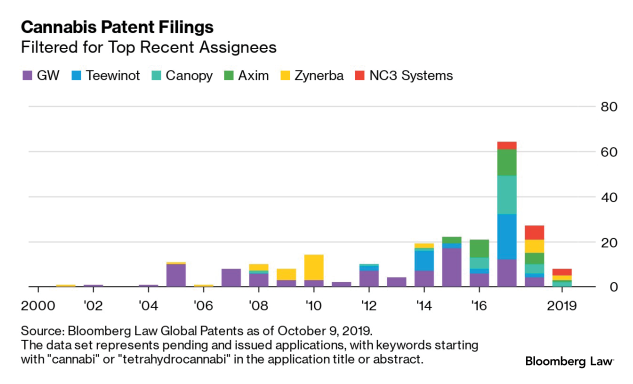 Chemical and mechanical applications have accounted for 99% of cannabis-related patent filings, covering innovations that block the effects of cannabis and those that utilize its properties to boost health. 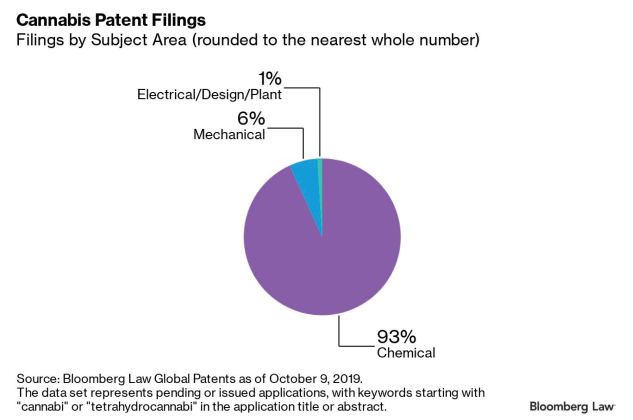 Along with a shift in filers, more recent filings feature cannabis as a health treatment itself, rather than as a cause for treatment. This positive spin, coupled with the growing diversity in cannabis patent ownership, should help cannabis innovation weather regulatory and societal adversity in the year ahead.

—With assistance from Susan Lightner-Sagarin.