Collective bargaining in 2020 wasn’t as much of a cost-saving opportunity for employers as one might expect from a year ravaged by economic instability and job losses. True, management-side negotiators gained some wage concessions from unions, compared with recent years. But contracts ratified in 2020 still promised workers an average pay raise of more than 3%, which is higher than it was at any time during the long recovery period following the Great Recession. 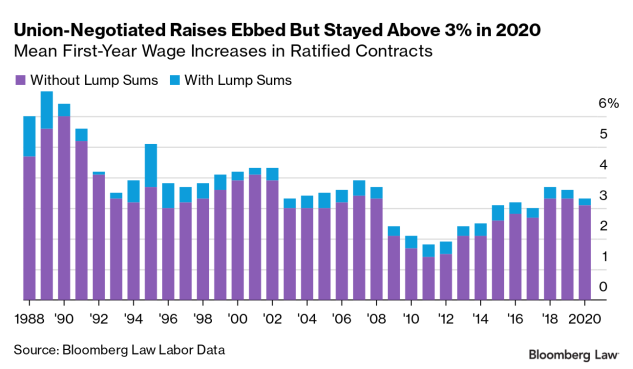 But despite this dropoff from the previous two years, management’s purse strings are still nowhere near as tight as they were during the decade prior. Average first-year pay raises in union contracts fell sharply from 2008 to 2009, and bottomed out at 1.4% in 2011 (1.8% with lump sums factored in). Even as recently as 2017, the average was only 2.7% (3% with lump sums).

The fourth quarter kept 2020 from being a bargaining disaster for unions. After three straight quarterly declines, unions somehow stopped the free-fall in Q4 and held the average pay hike firm at 2.8%. And with lump sums factored in, the average actually rebounded—from 3% in Q3 to 3.2% in Q4.

If 2020 was indeed the worst that the U.S. economy could throw at pandemic-era labor-management relations, then these averages suggest that, at least in terms of wages, both parties might be emerging with their bargaining model more or less intact.

Robert Combs
Legal Analyst
ANALYSIS: Third Quarter Has Unions in a Recessionary Wage Crunch
ANALYSIS: Which Union Workers Will Be Hit Hardest by Pay Cuts?
ANALYSIS: For Labor Negotiators, It Was a Lonely, Low-Paying Q2
ANALYSIS: Labor-Negotiated Wages Hit a Lull. Is Covid to Blame?
© 2022 The Bureau of National Affairs, Inc.
All Rights Reserved