Unions had a head of steam going on the organizing front before the National Labor Relations Board announced March 19 that it would suspend all election activities until at least April 1 due to the coronavirus pandemic.

NLRB data show that unions filed 411 petitions for representation elections through March 14. In the same time period of 2019, the board received only 324 representation petitions. That’s quite a turnaround in an arena where union organizing activity has steadily fallen year after year. 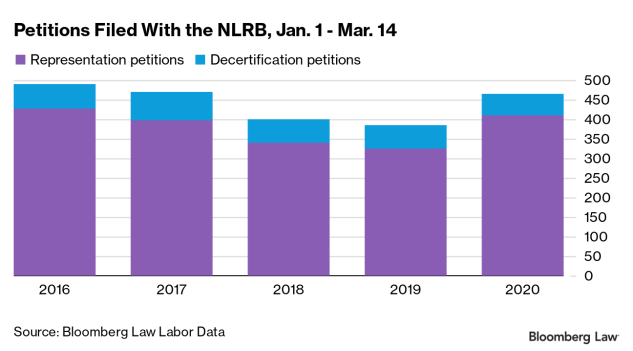 In fact, those 411 union petitions signify labor’s fastest start in five years, according to Bloomberg Law’s NLRB elections database. From Jan. 1 through March 14, 2016, the NLRB received 428 petitions, and that total had decreased every year since—until now.

The NLRB’s day-by-day petition filings data suggests that things may have started cooling down anyway, as the impact of the health crisis has grown. In the week ended March 20, the board received an average of 3.8 representation petitions per day, way down from 9.4 the previous week and the lowest average all year.

But those filings also serve to show how unusually aggressive unions have been in the weeks leading up to the NLRB shutdown. February was particularly active, with an average of 8.8 petitions filed per day. A list of the 10 busiest days of the last five years, in terms of representation petitions filed, took place in February 2020. 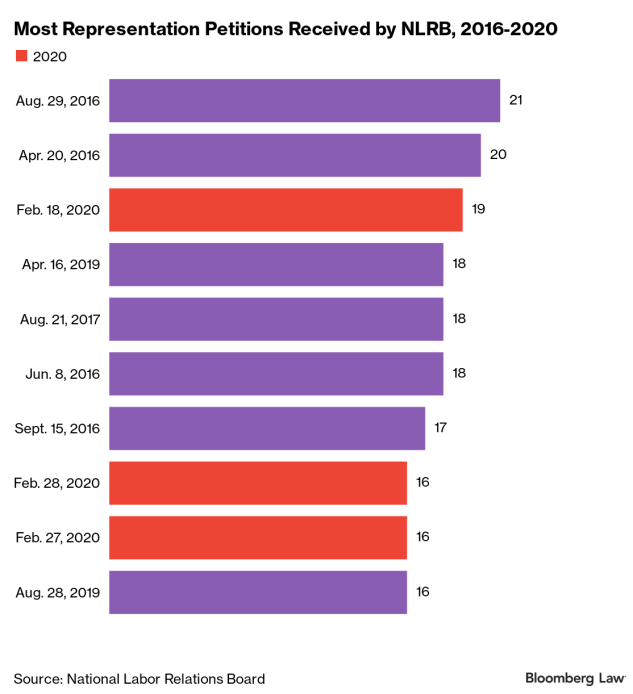 At the same time as organizing efforts have increased, the number of decertification petitions filed has declined. The NLRB received 54 petitions to disband bargaining units from Jan. 1 through March 14 this year, the lowest total in at least five years. This does not buck the recent trend of year-over-year declines in decertifications. But it is important to note that the recent influx of NLRB petitions has been one-sided in favor of more unionization, not less.

It’s difficult to determine what has caused 2020’s early uptick in organizing efforts—and, until the board starts processing petitions again, it will be even harder to gauge whether this was just an anomaly or the start of a sustained rebound that could put management-side labor lawyers on alert. But based on this data, one thing that is clear is that this NLRB shutdown could not have come at a less opportune time for organized labor.