With a day of widespread walkouts and demonstrations that explicitly linked the Black Lives Matter and Fight for $15 movements, labor unions have begun to re-establish themselves as the preeminent voice of worker protest.

The July 20 “Strike for Black Lives” event idled tens of thousands of workers nationwide, according to most media reports—some for the entire day, others for the symbolically significant period of eight minutes and 46 seconds, in observance of the May 25 death of George Floyd at the hands of Minneapolis police officers.

The event was organized by dozens of unions and other groups, including the Service Employees International Union, a major player in the nationwide Fight for $15 campaign that has used walkouts as a tool to advance the political goal of raising the federal minimum wage. Other nationwide union organizers included the International Brotherhood of Teamsters, American Federation of Teachers. United Farm Workers, United Food and Commercial Workers, Communications Workers of America, Amalgamated Transit Union, and UNITE HERE.

Since the beginning of the economic recession in February and the classification of Covid-19 as a pandemic in March, organized labor has had very little opportunity to utilize unrest, its most reliable leverage tool. For one thing, it’s hard for workers to go on strike if they have already been furloughed. For another, the exposure risks posed by the novel coronavirus have made working think twice before forming large gatherings such as marches and picket lines. 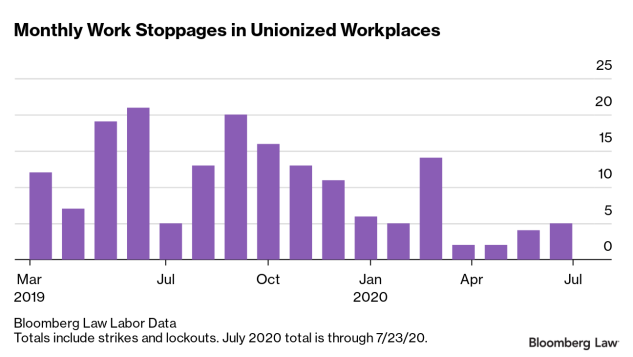 The chilling effect on strikes has been drastic. Unions organized 14 strikes in March—a middling total in any other year, but the highest mark by far in 2020. At the time, I wondered whether March’s total portended an upswing in union agitation in response to so many protest actions being called by nonunion workers in front-line occupations in the early weeks of the health crisis.

As it turns out, March was just a spike. The following months have seen next to no work stoppages at all. Only two strikes were called in April and in May, the lowest monthly totals since Bloomberg Law started tracking strikes in 1990.

Signs of a More Contentious Summer?

There are signs that union strike activity is picking up as the second half of the year begins and many temporarily shuttered workplace doors start to open again. In the second half of June, some 4,400 machinists began a still-active contract-renewal strike against General Dynamics at the Bath Iron Works shipyard in Maine, and 1,240 SEIU-represented nurses staged a 10-day strike at HCA’s Riverside Community Hospital in California to call for better safety and staffing procedures. And so far in July, unions have called five strikes, making July the busiest month on the picket lines since March. And that’s not even counting the one-day “Strike for Black Lives.”

While it’s true that the reopening of some workplaces is a reason why strikes appear to be on the rise again, we shouldn’t overlook the impact of the newly rekindled Black Lives Matter movement. Unions almost certainly didn’t.

Organized labor has never shied away from embracing hot-button social and political issues, particularly when doing so helps it meet its core goal of growing union membership. It’s one of the reasons why “Fight for $15” is being rebranded in some circles as “Fight for $15 and a Union.”

So for labor leaders, the sight of tens of thousands of masked- up marchers in dozens of cities risking infection to protest racism and demand police reform must have felt like a sign that it was time to start returning to the picket lines themselves. With the “Strike for Black Lives,” unions have served notice that they have learned much during their months on the sidelines.

Robert Combs
Legal Analyst
ANALYSIS: Covid-19 Has Workers Striking. Where Are the Unions?
Unions to Organize Mass Walkouts in ‘Strike for Black Lives’
ANALYSIS: Deceleration Defines 2019 State of the Unions
© 2021 The Bureau of National Affairs, Inc.
All Rights Reserved