Facing widespread criticism that they have permitted technology platforms to grow into monsters in recent years, competition enforcers in the U.S., European Union, and United Kingdom are rethinking their approach to regulating digital markets.

Each jurisdiction proposes a different approach to merger reform in the digital sector. But they share some common goals: addressing the unique features of online markets, restoring competition where possible, and keeping nascent markets from becoming dominated by one player. Regardless of how these enforcers proceed, their proposed approaches signal headwinds for tech mergers in 2021.

In its proposed Digital Markets Act (DMA), the EU merely would require the largest technology firms to “inform” the Competition Commission of all mergers. But in the U.K., the Competition and Markets Authority (CMA) proposes to lower the standard it must meet to determine that a digital markets deal is anticompetitive.

In the U.S., meanwhile, there are legislative proposals to shift the burden of anticompetitive proof away from the Justice Department and Federal Trade Commission and onto the dominant platforms when they seek to complete a deal. (The FTC and state attorneys general are also suing to unwind mergers they permitted Facebook to complete with WhatsApp and Instagram.)

These various proposed regulatory changes on both sides of the Atlantic are at an early stage and may change considerably before coming into force. However, all of these proposals reflect the same conclusion: Regulators worldwide are concerned that their existing merger regulations have permitted deals that stifled competition in digital markets. They want to tighten their merger rules to incorporate what they have learned and, hopefully, restore some competition rather than maintaining the status quo. At a minimum, they want to champion innovation and maximize future choices for digital consumers.

Mergers as a Key Strategy

Mergers and acquisitions are a key part of the business model for the largest digital firms. They have used M&A not only to reinforce their existing market position, but also to expand into adjacent markets for products and services complementary to their core businesses. The added layers of adjacent businesses can both protect the core from competition and leverage dominance into adjacent markets.

However, because traditional regulatory merger analysis worries very little about merging companies in adjacent or vertical markets, these layers of related technology have typically been assembled without much regulatory scrutiny. And because the dominant tech firms also tend to buy competitors at an early stage of development (e.g., startups), regulators have found it difficult to project accurately which small firms posed outsized future competitive threats to their purchasers.

As a result, the regulators have allowed a lot of tech deals under existing rules that, at least in hindsight, look anticompetitive. They also see waves of tech M&A that may further entrench dominant firms. 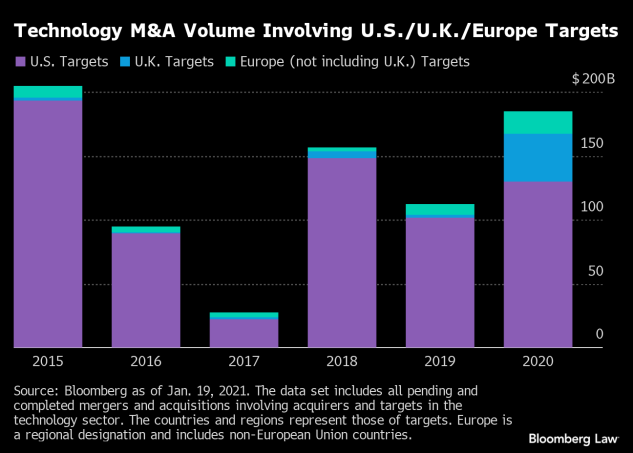 Looking at M&A data, these regulators seem justified in their anticipation of more tech deals. The tech sector overall did impressively well last year. Currently pending and completed deals involving both acquirers and targets in the technology sector—the type of intra-sector deals most likely to trigger competition concerns—show that 2020 was a notably high dollar volume year for U.S., U.K., and European tech targets.

The changes to existing rules are meant to slow technology acquisitions, but would have very different impacts on merger markets in each jurisdiction.

In the U.S., the House Judiciary Committee’s Subcommittee on Antitrust recommended in Oct. 2020 both bright-line restrictions on what digital giants can buy and changes to how tech mergers are reviewed by regulators. The committee’s report recommended structural separations to prohibit a dominant intermediary from competing with firms dependent on its infrastructure/platform, and “line of business” restrictions to bar a dominant firm from entering some markets entirely.

When dominant platforms do seek to acquire another firm, the subcommittee recommends radical changes to reviewing and regulating those deals. The report recommends: (1) that M&A by dominant platforms be presumed anticompetitive unless the parties show that the deal is “necessary for serving the public interest and that similar benefits could not be achieved through internal growth and expansion,” and (2) that dominant platforms be required to provide regulatory notice for all deals, not only those that currently meet regulatory thresholds under the Hart-Scott-Rodino Act. Regulators would face no deadlines to review these transactions under the report’s proposal.

The EU’s draft Digital Markets Act proposes only to require technology platforms designated as “gatekeepers” to inform the EU of all mergers, regardless of size. That would alert the authorities to deals they might not have otherwise noted, but doesn’t propose to provide any more enforcement power against gatekeepers than the competition commission already has. Of course, EU member states would remain free to review any mergers that fall within their jurisdiction.

The DMA defines gatekeepers as digital service providers in specific markets that (1) have a significant impact on the internal market; (2) operate a core platform service that serves as an important gateway for business users to reach end users; and (3) enjoy an entrenched and durable market position or probably will have one in the near future. The DMA also includes quantitative benchmarks that, if met, would lead to a presumption that a firm is a “gatekeeper.” For example, a firm is presumed to have a significant impact on the internal market if its annual EU turnover was 6.5 billion euros during the preceding three years.

In the U.K., the CMA’s proposed digital markets regime takes a more active approach to technology mergers when a company has “strategic market status.” The plan defines this loosely, but for those firms adjudged to have strategic market status, a new digital markets unit within the CMA would apply a stricter merger rule. The CMA would still regulate mergers that create a “substantial lessening of competition.” However, the CMA would regulate mergers involving a party with strategic market status that have a “realistic prospect” of substantially lessening competition, rather than require that the “balance of probabilities” demonstrates substantial harm. In other words, the greater uncertainty involved in projecting competitive impacts in fast-moving digital markets means that less concern about potential competitive harm is sufficient to warrant intervention, the CMA proposed.

Most antitrust regulators have learned a lot about digital markets in the past decade, and have built staff expertise in these fields accordingly. The U.S., EU, and U.K. are quite focused on entrenched platforms, the way digital markets tend toward a single winner, and how the digital giants build moats around their core businesses by swallowing up adjacent markets.

With these proposals, they are working to incorporate what they have learned into guidance and regulations that inform markets about what to expect in the future from merger review in the digital sector. It’s unclear whether that will go so far as to impede tech deals in the coming year, but it is clear that regulators will review any new digital mergers very closely.