A Forever 21 store at the Mall of America in Bloomington, Minnesota, U.S., on Wednesday, June 10, 2020.
Emilie Richardson/Bloomberg

Looking at M&A transactions with at least one U.S. party, REITs are doing more deals this year than they did during the same period last year.

Mergers and acquisitions volume over all sectors involving at least one U.S. party is about half what it was during the same period last year. And overall M&A deal count, which is catching back up, trails the same period in 2019 by about 15%. But by both measures, the subset of these deals involving real estate investment trusts (REITs) is doing better.

The number of M&A deals involving REITs is up by more than 50% this year compared to the same period in 2019. And while M&A deal volume involving REITs is down compared to the same period last year, its 30% drop is less severe than that of the overall market. At the current pace, the REIT M&A deal count, which has already surpassed the deal count for the whole year of 2018, is on track to reach the same level or even possibly to surpass 2019, which was a peak year for the industry group. 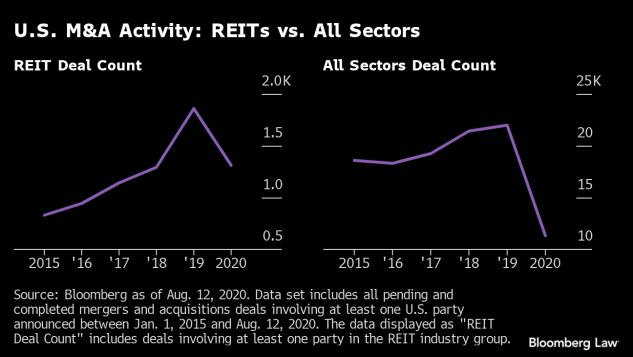