Deal size is down 19.3 percent from the first quarter this year, but the pace involving U.S. targets remains brisk, according to Bloomberg Law data. Acquirers proposed or announced 326 acquisitions totaling more than $579.5 billion this past quarter. 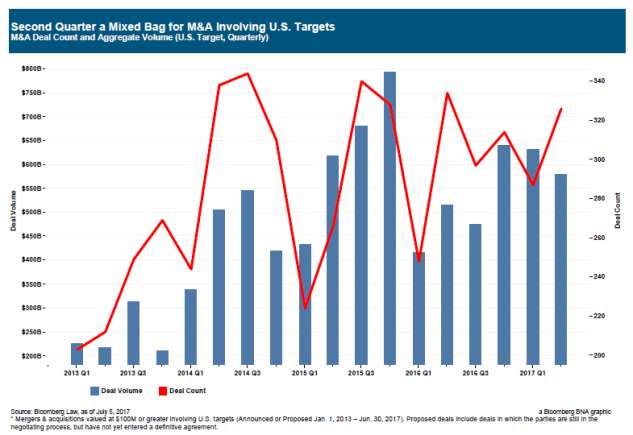 The 326 deals proposed or announced in the second quarter were the most since the second quarter of last year, when 334 were proposed or announced. However, deal volume has trended downward for the second consecutive quarter, including an 8.4 percent reduction from the first quarter. This is the first time deal volume has trended down in consecutive quarters since at least 2013.

Overall, the M&A market has remained relatively strong over the past six quarters, following a sharp decline in both deal volume and deal count from the last quarter of 2015 to the first quarter of 2016.

Is the Mega Deal Frenzy Over? 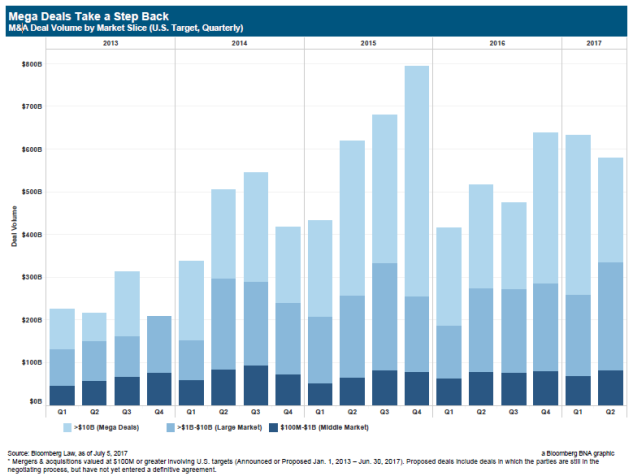 Large market deal volume jumped 32.9 percent from $190.4 billion in first quarter. While the mega market has been inconsistent over the last several quarters, the volume of large market deals has trended upward.

In addition, more than 34.9 percent of the mega deals proposed or announced between the beginning of 2013 and mid-2016 were terminated or withdrawn. By contrast, large deals during the same period failed at only a 14.8 percent rate.