Last year, before the latest slowdown in SPAC activity, many in the deals universe had already begun to express concern about the pace of de-SPAC deals: Hundreds of post-IPO SPACs were searching for private targets with which to merge.

In May 2021 (prompted by University of Florida Professor Jay Ritter’s prediction that half of SPACs would need to return money to shareholders), I asked “What If Half the SPACs Don’t De-SPAC?” Well, it seems that more than half of them still haven’t.

SPACs typically have a limited time period (between 18 and 24 months) in which to find and merge with a private target. As of June 9, 2022, there are 592 pre-deal SPACs yet to announce de-SPAC transactions; 119 SPACs with pending announced deals; and a grand total of 373 de-SPAC deals that have closed since 2016, according to SPAC Research.

Of the 592 pre-deal SPACs, 273 had IPO’d on or before the date of my May 2021 article. At that time there were 423 active SPACs with no deal announcements. So, roughly 65% of those same SPACs that were active a year ago are still categorized as being “pre-deal.” 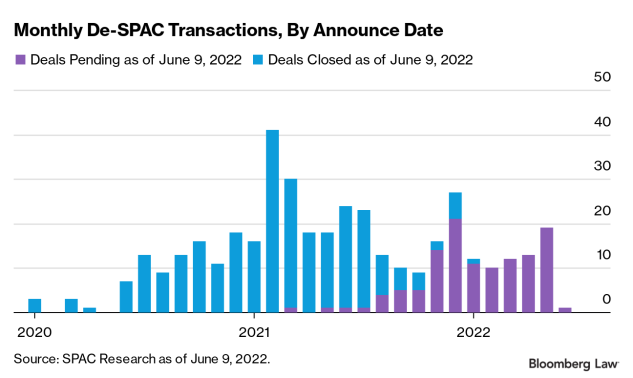 Last month, a total of 19 de-SPAC deals were announced, making a slight dent in the nearly 600 special purpose acquisition companies that need to merge with a private target before their deadlines.

Of the 592 pre-deal SPACs that have yet to announce de-SPAC deals, 16 have fewer than 50 days remaining until their deadlines to complete deals, and 21 have between 50 and 100 days. 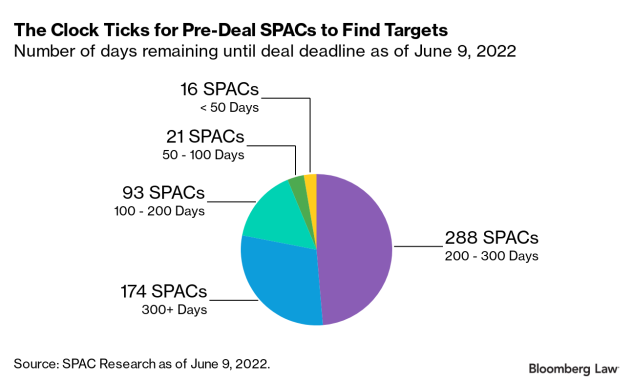 The remaining 500+ have somewhere between 100 days (roughly three months) and 600 days (more than a year and a half) to complete deals. 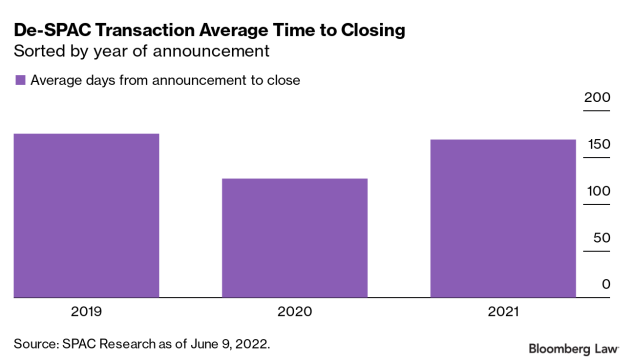 When a SPAC is unable to consummate a de-SPAC deal within the allowed time frame, it liquidates, and shareholders are entitled to “a pro rata share of the aggregate amount then on deposit in the trust account,” according to the SEC’s SPAC bulletin. While investors get their money back, liquidation costs sponsors.

Given that the average span of time from de-SPAC deal announcement to deal completion was 169 days last year (on par with 2019’s average and slightly up from 2020’s average), it’s safe to assume—and it’s probably an understatement—that the 20% of SPACs with fewer than 200 days until their deadlines are feeling heightened pressure to make a deal happen.