Signage for Anbang Insurance Group Co. is illuminated atop Anbang Financial Center Block B, center left, at night in Beijing, China, on Saturday, Feb. 24, 2018. Anbang's disputed deal with Mirae Asset Management Co Ltd is one of the three currently pending M&A deals in which the parties have filed suit.
Giulia Marchi/Bloomberg

Despite the stresses and upheaval of the Covid-19 crisis, surprisingly few parties to U.S. mergers and acquisitions have filed suit against each other in connection with deals that have come undone or linger in pending status during the pandemic.

Few and Far Between

A few high-profile mergers—like LVMH‘s pending purchase of Tiffany & Co., and Sycamore Partners’ terminated purchase of Victoria’s Secret from L Brands Inc.—have spawned lawsuits between the parties that have received much attention. But an analysis of Bloomberg Law dockets indicates that only a very small number of M&A deals terminated since March 12, 2020 (the date the World Health Organization declared the pandemic) resulted in lawsuits between the parties. The same is true for the larger category of currently pending M&A deals larger than $500 million that were announced in the year prior to the pandemic. In fact, upon our review of a total of 255 deals fitting either description, we found only six in which the parties sued each other regarding the transaction in U.S. courts. 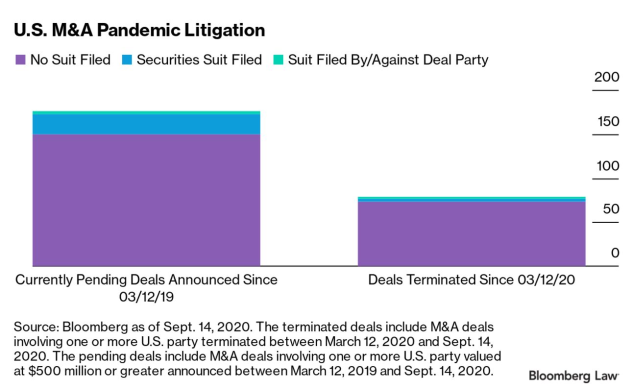 The 255 M&A deals reviewed involve the acquisition or sale of control in a company or asset for strategic purposes where the acquirer sought or is seeking to purchase 50% or more of the target and involve at least one U.S. party. For each of the deals reviewed, searches of Bloomberg Law’s U.S. federal and state dockets were run to identify those that have resulted in litigation between the parties. Bankruptcy-related suits were excluded from this review.

Deals aren’t terminated until they’re terminated. In other words, deals involved in an ongoing dispute or litigation may still be categorized as pending. These include rare deals, such as the Tiffany & Co.–LVMH deal, in which the seller or target is seeking specific performance in the form of the acquirer completing the acquisition as contemplated in the parties’ agreement despite the acquirer’s intent to delay or avoid the deal altogether.

This potential for dying deals remaining in a sort of pending purgatory is what led us to review all currently pending deals announced as far back as a year prior to the declaration (176 deals) in addition to deals terminated since the pandemic was declared (79 deals).

Among the terminated deals reviewed—those terminated since the pandemic was declared on March 12—three have associated suits filed by the deal parties: the Victoria’s Secret-Sycamore Partners deal; the Taubman Centers-Simon Property Group deal; and the Yatra Online Inc-Ebix Inc deal.

It is also worth noting that deal terminations in this subset of M&A deals are tapering off after reaching higher levels in April and May. 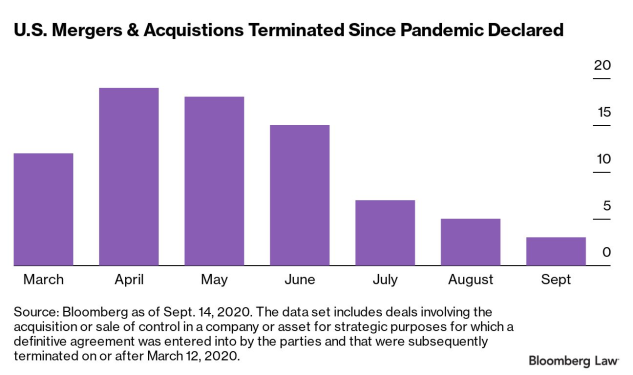 We were not surprised to find that the most frequent type of suits associated with these transactions are shareholder lawsuits. We identified 26 deals out of the 255 pending and terminated deals reviewed that faced or are facing shareholder lawsuits alleging securities law violations based on the merger. Shareholder suits about public mergers are persistent regardless of the ultimate success of the deal. The next question is whether more shareholders will avail themselves of this option as the pandemic wears on.