First-year pay hikes in collective bargaining agreements have trended downward since the beginning of the recession. That’s to be expected. But Bloomberg Law’s database of wage settlements is revealing a couple of anomalies that suggest union negotiators might not be following proven paths to maintain wage security during an economic downturn.

The average first-year wage increase for union contracts negotiated in the third quarter was 2.9%, down from 3.1% in the second quarter. In the first quarter, which had one foot in recovery and one in recession, the average was 3.4%.

This is the third straight quarter that the average negotiated pay raise for union workers declined. The last time a streak like that happened was in the first few years following the U.S. housing market collapse.

Since we’ve evoked the Great Recession, let’s take a closer look at how unions negotiated wages in those rough economic waters a decade ago.

Comparing the first three quarters of 2010 and 2020, it’s pretty clear that wage increases this year are still in a relatively strong position. Through Sept. 30, contracts ratified in 2020 brought an average first-year wage increase of 3.2%, down only slightly from last year’s 3.3% average, yet still much higher than in 2010, when the year-to-date average was a slim 1.8%.

But there are two concessions from management that unions in the Great Recession were able to secure that the unions of 2020 so far have not: a boost in lump-sum payments and an increase in deferred wage hikes. 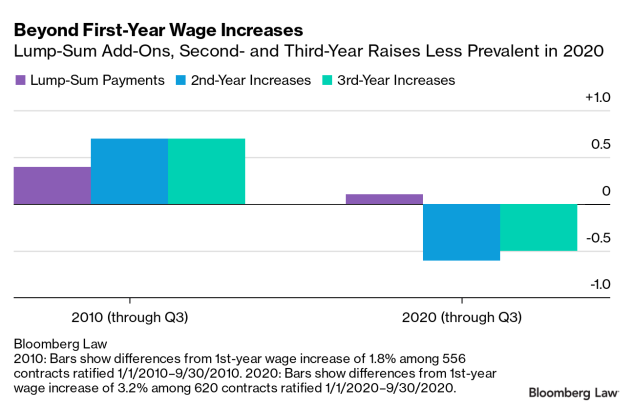 When signing bonuses and other lump-sum payments were factored in, the average first-year wage increase in the first three quarters of 2010 grew dramatically—from 1.8% to 2.2%. But in 2020, adding lump sums barely moved the needle, rising from 3.2% to 3.3%. Contracts are yielding fewer—and relatively smaller—signing bonuses in this recession than they were in the last one.

As for deferred raises, unions in 2010 gained wage hikes in the second and third years of the contract that were markedly higher than the first-year average: 2.4% in both the second year and third year. But negotiators in 2020 have shown no such willingness to backload contracts with higher wage increases. The year-to-date average raise is 2.6% in the second year and 2.7% in the third, which are both lower than 2020’s 3.2% first-year average. Higher first-year raises and lower second- and third-year raises are normally a feature of contracts negotiated when times are good, not bad.

Pressures at Beginning and End of Contracts

This pair of wage pressures, tamping down both signing bonuses and deferred raises, leaves unions caught in a wage crunch. On the front end, they are reacting to the recession by agreeing to smaller first-year pay hikes, but are not offsetting their losses with lump-sum payments. And on the back end, they are failing to counter with stronger raises scheduled to take effect later, in presumably rosier economic times.

Eventually, I expect more CBAs to follow the recessionary playbook and start backloading raises beyond the first year. But if that doesn’t happen soon, 2020 might end up as a uniquely unsuccessful wage negotiating year for organized labor.