A pedestrian wearing a protective mask walks past a boarded up GNC store in Washington, D.C., U.S., on June 4, 2020. GNC Holdings Inc. is in bankruptcy proceedings and entered into a stalking horse agreement with its China-based shareholder Harbin Pharmaceutical Group Holding Co., Ltd. on August 7, 2020. The agreement provides for the acquisition of GNC's business by Harbin for $770 million.
Andrew Harrer/Bloomberg

In the transactional world, many are watching for an uptick in distressed deals, but we aren’t seeing abnormal levels of distressed deal activity yet. Pending and completed bankruptcy and liquidation acquisitions and publicly filed Section 363 asset sale agreements still track previous levels. Data from the Great Recession and the years following suggest that if there will be any spike resulting from the current Great Lockdown recession, as some are calling it, it may not start to materialize until 2021.

Bloomberg’s data on distressed M&A deals—those involving the acquisition of a company or its assets through a liquidation, wind down, dissolution, or bankruptcy—indicate that 2020 is on track to be a normal year. Unless the remainder of the year sees a flood of these deals, 2020’s distressed deal volume and count will likely fall within the ranges seen in recent non-recession years. 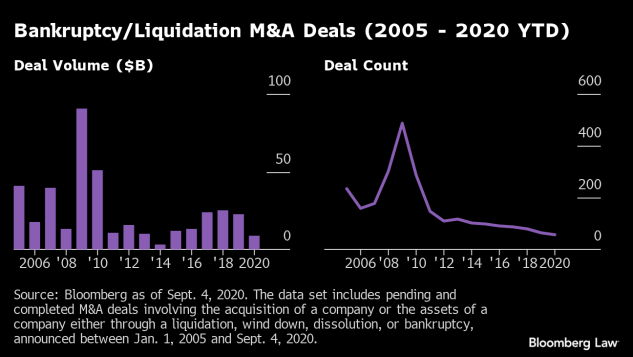 We also reviewed data from Bloomberg Law’s Transactional Precedent Database, which contains all M&A contracts filed with the SEC’s EDGAR database. The data do not yet show any sign of a spike in distressed deals in 2020, either. When looking at 363 sale agreements and stalking horse agreements—which are typically asset purchase agreements involving a target in bankruptcy proceedings and must be approved by a bankruptcy court—the number of agreements filed year to date are more or less on par with past years going back to 2010. 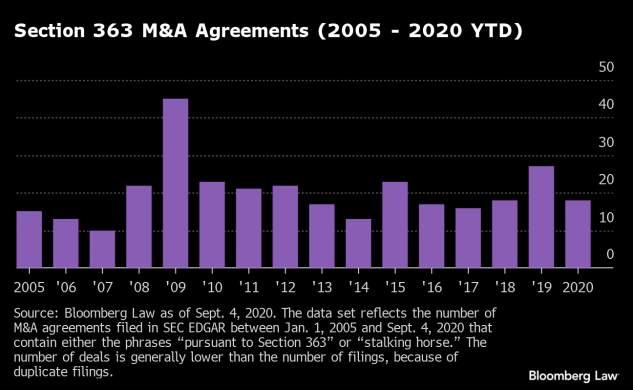 Both of the data sets we reviewed indicate that there was a dramatic jump in distressed deal activity in 2009, the second full year of the Great Recession, which is deemed to have begun in December 2007. This 2009 jump in distressed deal activity is consistent with data on bankruptcies in general. If the current Great Lockdown is comparable to the Great Recession—a big question to be left to economists—there is a possibility that 2021 will bring the flood of distressed acquisitions that dealmakers, largely starved of boom-level non-distressed M&A activity, are waiting for.

The Spectrum of Distress

It is important to keep in mind that there is not one single definition of “distress” when it comes to acquisitions.

There’s the more obvious definition, used when discussing “distressed” transactions: deals involving a target currently in bankruptcy proceedings, imminently expected to file for bankruptcy, or involved in a 363 sale—the kind largely captured in the data discussed above. But there’s also the state of financial distress that companies find themselves in before they file for bankruptcy and/or pursue a 363 sale. Companies that are underperforming may choose from a broad range of remedies—as targeted as re-negotiating key business contracts or bank loans, or they may sell off via a non-363 asset sale or other M&A transaction, without entering into bankruptcy proceedings.