SPAC IPOs essentially rewrote the record book last quarter, greatly exceeding both the total SPAC IPO deal count and value for the entirety of 2020 (itself a record year). They now dominate the IPO market, but storm clouds are brewing that might rain on this parade—maybe even for SPACs enjoying the backing of luminaries like Ciara and Shaq. 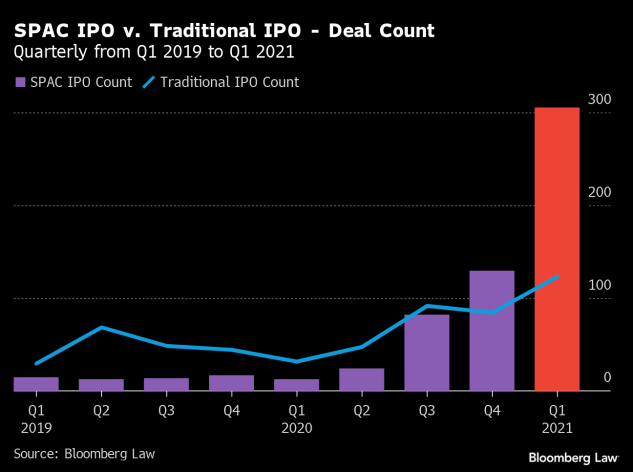 Special purpose acquisition companies raised $98.6 billion on 304 offerings during the first quarter. Those figures compare to $83.27 billion raised on 248 offerings in all of 2020—numbers which themselves represent a huge increase over the 63 SPAC IPOs raising $11.7 billion in 2007, the previous record-setting year in both count and value. Looking back over the 30 years before the most recent quarter, a total of 660 IPOs raised $155.21 billion for SPACs. Another quarter like the last one and the old record book may need to be retired forever.

SPACs Soar Above Other Industry Sectors

The largest IPO of any type was the $1.75 billion SPAC offering by Soaring Eagle Acquisition, a company that followed the SPAC trend of not limiting its prospective targets to any industry or sector. In the past, management’s expertise and track record in a particular industry segment was a major selling point for investors. Lately, the market has been so hungry for SPACs, and jostling for targets post-IPO so competitive, that specific sector expertise is no longer necessary to instill investor confidence in SPAC management. 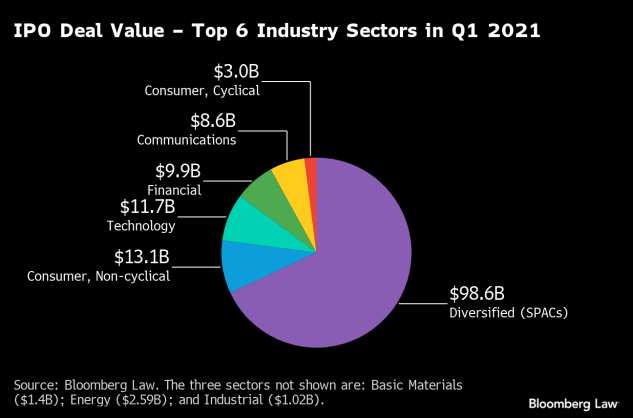 SPACs, represented in the pie chart by its broader sector name “Diversified,” are now the dominant capital raising sector of the IPO market. SPACs took in nearly 66% of all IPO money raised and accounted for 71% of all IPOs over $1 million.

We may finally be pressing on the upper limits of this wild SPAC market. This week, the only three companies scheduled to go public are all biotechnology. Four SPAC IPOs have recently been postponed and the share prices of about half of the SPACs that have gone public this year are trading below their offer price.

The overwhelming nature of the SPAC boom is proving overwhelming to the professionals who support such enterprises. Professionals such as insurers, bankers, lawyers, accountants, and the SEC staff that review their filings cannot keep up. There’s only so much capacity for these deals.

Other factors are also slowing the SPAC roll. Fiscal stimulus, a pending $2 trillion infrastructure bill, and evidence of economic improvement are moving investor money away from SPACs toward more traditional sectors of the economy that will benefit from growth. The Securities & Exchange Commission also recently issued pointed guidance to SPACs and their targets about the need to truly be ready to operate both as a public company and within the limitations that will be placed on them, including the unavailability of an accelerated type of fundraising, WKSI filing status, once the company de-SPACs with a merger target.

This year, the SEC issued an unusual Investor Alert to warn investors about investing in a SPAC simply because a celebrity is promoting it. Many celebrities have endorsed a SPAC, including singers Ciara Wilson and Jay-Z, and current or former professional athletes Shaquille O’Neal, Alex Rodriguez, Stephen Curry, Serena Williams, and Colin Kaepernick, but the value they add is debatable. Class action litigation against SPACs is increasing and short-sellers are targeting SPACs that they feel are sketchy.

These ingredients have the potential to make the IPO road for SPACs and their investors considerably bumpier over the rest of the year.