The “major questions doctrine” used to be a narrow exception to federal courts’ traditional deference to regulatory agencies in interpreting the statutes they administer. But now, the exception has swallowed the rule, and courts appear ready to apply it to any case of importance, instead of only those that are “extraordinary.”

The result will likely be a restriction on federal agency power to act, and has the potential to create a dramatic shift in power from the executive to the judiciary.

There are few Supreme Court decisions that actually use the specific phrase “major questions doctrine.” One is a 2019 dissent—his own—that Justice Neil Gorsuch referenced in his concurrence with the court’s Jan. 13 decision on OSHA’s Covid shot-or-test rule.

The major questions doctrine didn’t just spring into existence in 2019, however. Justice Gorsuch’s concurrence referenced cases further back in the court’s precedence, tying the doctrine to the “nondelegation doctrine,” which is another method of analysis courts use to examine the scope of permissible action granted to federal agencies.

In that case, Justice Sandra Day O’Connor, writing for the majority in FDA v. Brown & Williamson, relied on a quote from a law review article that Justice Stephen Breyer had written before becoming a Supreme Court justice: “A court may also ask whether the legal question is an important one. Congress is more likely to have focused upon, and answered, major questions, while leaving interstitial matters to answer themselves in the course of the statute’s daily administration.”

Justice O’Connor interpreted that to mean that in “extraordinary cases, there may be reason to hesitate” before a court decides to defer to an agency’s decision or action. She wrote that the court “must be guided to a degree by common sense as to the manner in which Congress is likely to delegate a policy decision of such economic and political magnitude to an administrative agency.”

In a recent interview, Professor Richard Revesz of NYU Law School stated that Justice Breyer disagreed with the Brown & Williamson majority’s characterization of his article— a conclusion bolstered by the fact that Breyer dissented in that very case. Once Breyer steps down, the Supreme Court will be composed of an even bigger majority of justices who espouse and approve of the major questions doctrine.

The chart below shows the use of the phrases in federal court docket filings available on Bloomberg Law, and it largely tracks the pattern for the major questions doctrine. 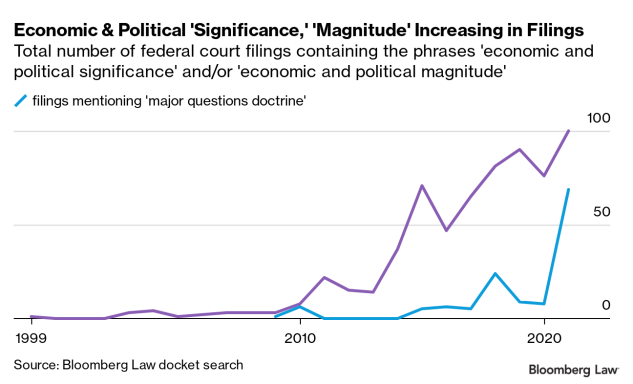 The ‘Extraordinary’ May Become Commonplace

The concept of “economic and political significance” has also been mentioned by the Supreme Court from time to time over the years when ruling on environmental questions that tested the boundaries of the Environmental Protection Agency’s regulatory authority.

Those boundaries are set to be tested again today, as the Supreme Court hears arguments in a group of consolidated cases considering the breadth of the Clean Air Act’s grant of authority to the EPA to act, and whether EPA policies—including the Clean Power Plan—exceed that authority.

The major questions doctrine continues to be a factor in lawsuits challenging executive action. For example, a federal district court in Louisiana recently granted a preliminary injunction against President Joseph Biden and several other members of the executive branch, holding that Biden’s executive orders exceeded the president’s authority. As support for its ruling, the court cited the major questions doctrine by name. The court in that case brought together both labels for this doctrine, stating: “The major questions doctrine ensures that agencies do not impose new obligations of ‘vast “economic and political significance’” upon private parties and States unless Congress ‘speaks clearly.’”

From arguments in briefs to trial court rulings, and all the way to the nation’s highest court, the major questions doctrine is a hot topic. It will undoubtedly be mentioned in today’s oral arguments at the Supreme Court; indeed, “major questions” and questions of “economic and political significance” were mentioned in tandem in at least one of the petitioners’ briefs. This concept, under either name, will almost certainly find its way into more and more briefs filed on federal dockets—especially if parties find success invoking it. As noted previously, the current makeup of the Supreme Court, and the justices’ writings on this issue, suggest that they will.