Only after you have solid processes in place can you turn to technology and automation. This was the message from Reese Arrowsmith, VP and head of operations, Campbell Soup Company, at the Association of Corporate Counsel Annual Meeting in Phoenix in October. Yet just a week prior, at the Clio Cloud Conference in San Diego, there were more than 50 legal tech company sponsors being touted as lifelines for legal practice. If process is the key, why are these legal tech solutions so popular?

Doubling Down on Tech

The Bloomberg Law 2019 Legal Operations & Technology Survey found that 97% of respondents used at least one legal technology or tool. Of these, legal research (71%), billing (71%), timekeeping (61%), records management (56%), and e-discovery (55%) were the top areas in which respondents said they were using legal tech.

Interestingly, however, almost half (44%) of respondents said they are not doing anything specific to improve efficiencies other than adopting new technologies. 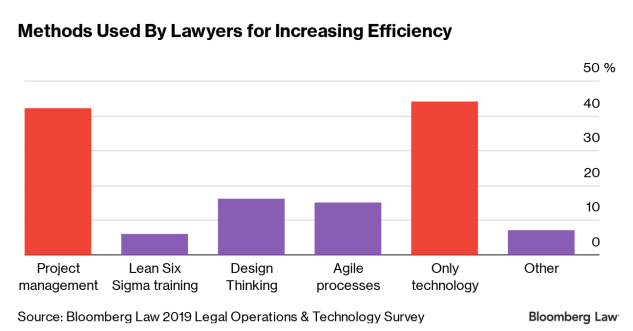 In a recent Bloomberg Law X.0 podcast episode, Kate Orr, senior innovation counsel at Orrick, Herrington & Sutcliffe, said that solely relying on technology for innovation is “Bad, bad, bad!” She asserted that technology alone is never the solution. “Technology may be a piece of it, but the people and process have to go with it,” Orr said.

In the same episode, Daryl Shetterly, director of Orrick Analytics, said that “legal innovation is clearly a movement,” and that “hype is probably one of the leading characteristics of that movement.” As evidence of that, he pointed out that “there’s a technology conference on every corner,” but that it would be difficult to find a process conference. According to Shetterly, there is a lot of great tech out there, but not every tech tool is a great fit for an organization. Law firms and corporate clients increasingly need somebody to explain what’s doable and what’s hype.

While technology is clearly top of mind for many practitioners, the Bloomberg Law Survey also found that aside from adopting new technologies, 42% of respondents are utilizing project management as their principal method of increasing efficiency. While still the minority, project management is coming in a strong second to tech adoption.

According to the Bloomberg Law Survey, 87% of corporate respondents stated that as clients, they expect outside counsel to use appropriate legal technology to be more efficient. 2020 may reveal more about what is deemed the “appropriate use” of technology. It’s possible that, as Shetterly pointed out, “in their enthusiasm to market, a lot of tech providers have either oversold, or broadly sold, solutions as one-size-fits-all.” Next year we could see a scaling back in number and scope of legal technology companies for more tailored approaches.