The Sept. 20 release of the so-called FinCEN Files is the latest mass data dump on international money laundering, comparable to the releases of the Panama Papers in 2016 and the Paradise Papers in 2017. Amid the ensuing global wave of media reporting on massive flows of corruption through large international banks, U.S. news coverage has often focused on a narrative that gaping U.S. legal and regulatory deficiencies urgently require political action. However, the information revealed in the FinCEN Files collection does not implicate deficiencies in existing U.S. anti-money laundering (AML) policies and civil regulatory enforcement.

FinCEN Files is the name used by the International Consortium for Investigative Journalists (ICIJ) for its collection of more than 2,100 leaked suspicious activity reports (SARs). According to the ICIJ, “nearly 90 financial institutions” filed the SARs, whose filing dates were in 2011–17. The transactions reported in the SARs occurred from 1999 through 2017 and totaled more than $2 trillion.

An unnamed U.S. source originally leaked these SARs to reporters at Buzzfeed, who shared the leaked files with the ICIJ and its global media partners. The ICIJ, Buzzfeed, and 108 other media partners spent 16 months analyzing the leaked SARs and other related documents before announcing the FinCEN Files in September.

SARs are reports that banks and other financial institutions are required to file with the Financial Crimes Enforcement Network (FinCEN) to report possible money laundering and other suspicious activity. Filing SARs is one of many requirements under the main U.S. AML law, the Bank Secrecy Act of 1970 (BSA), and its implementing regulations (31 CFR Chapter X).

Filing SARs is a long-established element of AML compliance, dating back to 1996. SARs and other BSA-mandated reports filed with FinCEN are intended to provide U.S. law enforcement with information useful to investigate money laundering, terrorist financing, and other financial crimes. Each year, FinCEN receives about two million SARs. 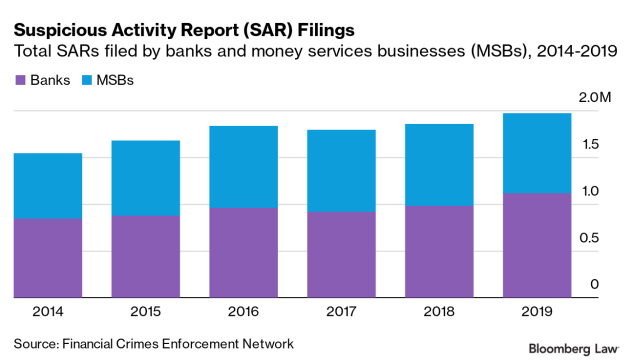 ICIJ’s release of the FinCEN Files was part of a launch in coordination with its media partners. An impressive array of reports of massive movements of corrupt funds through major international banks has resulted, in countries all over the globe.

U.S. media coverage has tended to go further, starting with the publication of Buzzfeed’s initial article on Sept. 20. That piece asserted that the SARs in the FinCEN Files are evidence that efforts against money laundering, by FinCEN and the U.S. government as a whole, are inadequate. In that narrative, the existence of these SARs shows that “so long as a bank files a notice that it may be facilitating criminal activity, it all but immunizes itself and its executives from criminal prosecution.” Even enforcement actions are inadequate, since they do not send bank executives to prison: “In the rare instances when the US government does crack down on banks, it often relies on sweetheart deals called deferred prosecution agreements, which include fines but no high-level arrests.”

Unsurprisingly, Senators Elizabeth Warren and Bernie Sanders soon used FinCEN Files media coverage in support of their political goals regarding banks. Sanders has so far only tweeted about it, but Warren almost immediately released specific policy statements, based on “The Ending Too Big to Jail Act” bills that she introduced in 2018 and 2019. One proposed policy would create a new permanent investigative unit in the Treasury Department, separate from FinCEN, focusing on financial crime within banks. Another proposed policy is to “reform” the use of deferred prosecution agreements by mandating judicial oversight of them.

If politicians continue to elevate perspectives like those in Buzzfeed’s reporting, the FinCEN Files could have an impact on AML regulation and enforcement in 2021 and beyond. Of course, whether any impact on legislation may occur depends heavily on the results of the elections in November.

This line of U.S. media coverage of the leaked SARs has little relevance to AML regulation and enforcement under current laws, however. By focusing attention on a popular political issue — how to punish banks and their executives — the vast majority of reporting neglects the less spectacular legal and regulatory issues of the actual U.S. AML regime.

One way that the actual legal and regulatory issues are less gripping than the media narrative is that AML regulation and enforcement are distinct from the criminal offense of money laundering. FinCEN and the federal financial regulators are responsible for AML regulatory compliance, enforcing the requirements of the BSA and other AML laws and regulations in civil enforcement actions.

The investigation and prosecution of the criminal offense of money laundering are the responsibility of law enforcement and prosecutors. Using AML compliance to justify putting bankers in prison has no basis in existing statutes, which go back 50 years to the enactment of the BSA in 1970.

The SAR filings in the FinCEN Files, depicted as spectacular admissions of involvement in money laundering by financial institutions and a get-out-of-jail-free card for their executives, serve the more mundane purpose of providing law enforcement investigators with easily accessible information that they can use to investigate money laundering and other financial crimes. An array of federal, state, and local law enforcement agencies have access to the FinCEN database of SARs and other reports required by the BSA. They are authorized to use this information to investigate suspected money laundering anywhere, including at banks.

There are arguments that more law enforcement attention and resources should go to investigating money laundering, but those are public policy and political issues, not legal issues. Leaking the FinCEN Files may further these public policy and political arguments, but it also threatens the foundations of the AML legal and regulatory regime that is supposed to support investigations of money laundering. This problem will be the subject of the second part of this series.