No matter the expected weather in any given month, union contract negotiations can put workers and management in the hot seat.

Bloomberg Law’s labor databases have identified 450 collective bargaining agreements, each covering 200 or more workers, that are set to expire next year. Using that list, I’ve checked the calendar to see where there might be major friction throughout 2021.

January: Teamsters. January is typically when the terms of union contracts begin, not end, so there’s not much action scheduled for 2021’s opening month: 24 major expirations, involving some 12,600 workers. The two largest negotiations on the January calendar both involve the nation’s largest private-sector union, the International Brotherhood of Teamsters, and they reflect the Teamsters’ vast range: The union is representing 2,000 airline pilots at Republic Airways, and 1,100 warehouse workers and drivers for Hunt’s Point Produce Market in New York City. This may end up the first negotiation involving pilots since congressional aid for airlines ran out at the end of September, so tensions might be high.

February: State employees and telecom workers. Nearly two-thirds of the approximately 74,500 workers with major contracts up for renewal in February are wrapped up in two of the 35 scheduled expirations. The largest bargaining unit is an AFSCME local in Ohio, which represents about 30,000 office and corrections workers statewide. Meanwhile, 20,000 employees represented by the Communications Workers of America will be the latest CWA local to spar with AT&T’s numerous subsidiaries. This time, it’s AT&T Mobility’s “Orange” contract, which is spread across 36 states. In February, the much-smaller “Purple” contract between the two parties raised wages and maintained health benefits.

March: Grocery workers. One question raised by the Covid-19 pandemic is whether unionized workers who had to stay on the job throughout the public health crisis will see corresponding returns at the bargaining table. March might bring answers. Kroger Co. has two massive Midwestern contracts to negotiate in March, covering approximately 20,000 workers in Ohio and 15,000 in Michigan. All in all, the United Food & Commercial Workers union are negotiating nine of the 31 major contracts set to expire in March, representing more than 40% of the approximately 92,000 workers involved. 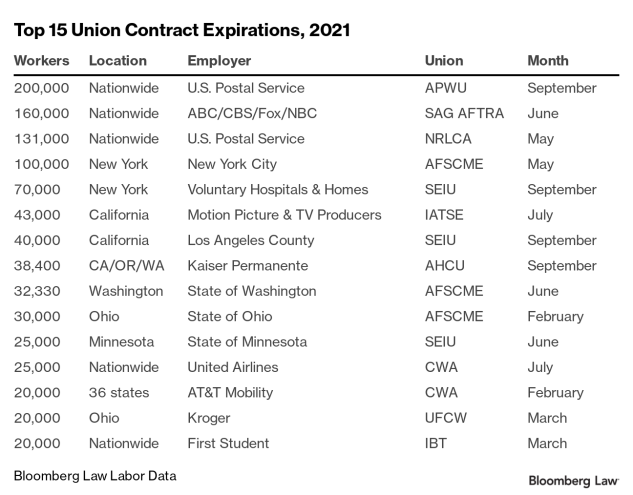 April: Auto workers. In a relatively low-volume month, the largest contract up for renewal involves the United Auto Workers, but not in its traditional stronghold. A still-new bargaining unit born out of the wave of organizing on college campuses in 2018 and 2019, 4,500 UAW-represented teaching assistants, graders, and tutors at the University of Washington might end up learning that negotiating for wages and benefits is rarely as fruitful in second contracts as in first contracts. The UAW has been at the forefront of campus organizing, but in April, it also has an engine-room expiration: a contract with Detroit Diesel involving 900 workers. All told, 20 major contracts, covering about 28,700 workers, will expire in April.

May: Public servants. With more than 282,400 workers represented in 28 expiring contracts, May looks like one of the busiest months on the calendar. But actually, most of those workers are covered by just two contracts: The U.S. Postal Service’s nationwide agreement with its rural mail carriers’ union, covering 131,000 employees; and New York City’s pact with some 100,000 AFSCME-represented workers. Given the recent change of leadership at the USPS and heightened attention on the service’s importance, the negotiations in the rural arena might actually provide more thrills.

June: Teachers. School zooms out in June, but bargaining season for teachers is reaching its peak in the year’s busiest bargaining month overall. After a trying and uncertain school year, all eyes will be on how the challenges of the pandemic will affect labor talks between teachers and their school districts. Of the 141 major contracts due to expire in June, more than 50 involve National Education Association locals and more than 20 will involve affiliates of the American Federation of Teachers. June’s total of more than 410,000 affected workers also includes the expiration of SAG-AFTRA’s nationwide pact with the Big 4 television networks.

July: Entertainment workers. July seems fun. Major union contracts expiring in July cover more than 98,000 workers, and more than half of these workers are in the entertainment industry. The wave is led by 43,000 members of the International Alliance of Theatrical Stage Employees, whose basic agreement with the motion picture and television industry is up for negotiation. The industry also has big contract renewals due with the Teamsters and with IATSE animators. A Fox Sports deal with some 1,000 IBEW-represented electrical workers nationwide also tops the list. Among the rest of the month’s 30 expirations, UNITE HERE, representing 3,000 casino hotel workers at Wynn Las Vegas, is also expected at the table.

August: Teachers, again. August once again proves that summertime isn’t necessarily down time for unionized teachers. Of the 44 major contracts up for negotiation (covering about 40,000 workers), 16 are with NEA affiliates and nine are with AFT affiliates. The largest of them all will be in the Boston Public Schools system, whose contract covers about 7,500 AFT members. August’s second-largest expiration is the largest so far this year at a manufacturer: International Paper Co., which is renegotiating its master contract with five industrial unions, representing about 6,000 workers.

September: Health care workers. Four of the year’s 10 largest contract expirations are scheduled for September, a very busy month that affects nearly 400,000 workers. The largest is another Postal Service pact—this time, it’s with some 200,000 members of the American Postal Workers Union—but two of the others are in health care. Hospital and long-term care facilities are a year-round presence when it comes to major bargaining sessions, but in September, they account for 15 of the 34 major contracts. Kaiser Permanente alone has three contracts up for renewal with its Alliance of Health Care Unions, a Kaiser-specific combo of labor organizations representing more than 47,400 workers; while the Service Employees International Union prepares to represent about 70,000 hospital and nursing home workers across New York state.

October: Nurses. As is typical for the beginning of a quarter, October doesn’t have a heavy bargaining slate—just 12 major expirations, covering almost 15,000 workers—and it’s mostly a mixed bag. Nurses-only unions have a busier month charted for September with other health care colleagues, but they also dominate October, with five contracts totaling more than 4,500 registered and licensed professional nurses. A year and a half after essential workers like nurses were first called on for Covid-19 response, the October negotiating table might show us what effect the pandemic will have on long-term bargaining trends among front-line workers.

November: Factory workers. The manufacturing industry has a quiet year ahead, labor relations-wise, but in a sparsely contested November (12 major contracts covering about 29,000 workers), three of the seven largest expirations are set to affect factory floors. The United Steelworkers top the list, representing about 9,700 Newport News shipbuilding workers in negotiations with Huntington Ingalls Industries. In late 2020, shipbuilding employees in San Diego received big raises in their negotiations with General Dynamics. Will their East Coast counterparts fare as well in 2021?

December: New York City workers. Kicking off the countdown to 2022, the Big Apple will host the big action in labor bargaining in December. The city will be negotiating three pacts, each covering more than 5,000 workers. The largest will be the Metropolitan Transit Authority’s contract with seven different unions. All told, 14 of December’s 39 major expirations, covering nearly half of the nearly 60,000 workers affected, will take place in New York state.

Robert Combs
Legal Analyst
ANALYSIS: Third Quarter Has Unions in a Recessionary Wage Crunch
ANALYSIS: Amid AA Furloughs, Unions May Reroute Bargaining Goals
ANALYSIS: Shorter CBA Lifespans Could Be a Boon for Unions
ANALYSIS: For Labor Negotiators, It Was a Lonely, Low-Paying Q2
© 2022 The Bureau of National Affairs, Inc.
All Rights Reserved