As companies work to rebuild more resilient supply networks following the initial impact of the pandemic, have they begun looking to M&A to bolster their supply chains as expected? The answer is: If they are, we aren’t seeing the deal activity yet.

As reported by Bloomberg this month, a recent HSBC Holdings Plc survey of over 2,600 businesses worldwide yielded this result: Two-thirds (67%) of survey respondents reported that their top priority is “increasing control of their supply chain,” of which 22% indicated that “Owning more of the supply chain (vertical integration)” is a means to achieve that increased control.

But this supply chain and vertical integration trend has yet to begin. Bloomberg Law’s review of 210 currently pending or completed M&A deals (U.S. acquirer, value $100 million or more) announced since the pandemic was declared on March 11 reveals that only six of these deals reportedly or apparently were motivated by supply-chain synergies.

These six deals are:

– the $488 million Solara Medical Supplies LLC–AdaptHealth Corp. medical supplies deal, which, according to a press release, will “add critical mass to important supply product categories,” “create a single supply source for an expanded set of chronic care products and services,” and increase [the acquirer’s] overall exposure to recurring supply sales;

– the $167 million Praha Vaccines a.s.–Novavax Inc. Covid-19 vaccine deal, which included “a biologics manufacturing facility in [the] Czech Republic” as part of the acquisition; and

(Energy supply-related deals—in which acreage, oil and gas fields, and the like were the subject of the transaction—were not included in the tally.)

Most of the other U.S.-acquirer deals were horizontal intra-industry diversification deals in which a company was buying either a rival or a complementary company to gain variety in and/or expand its offerings. These intra-industry deals largely did not involve companies that had any pre-existing relationship, and no supply chain-specific motivations were reported or are apparent from the facts of the deals. Of course, that isn’t to say that these deals won’t necessarily have supply-chain implications for the companies involved. It’s just that they are not the new post-pandemic vertical deals we are watching for. 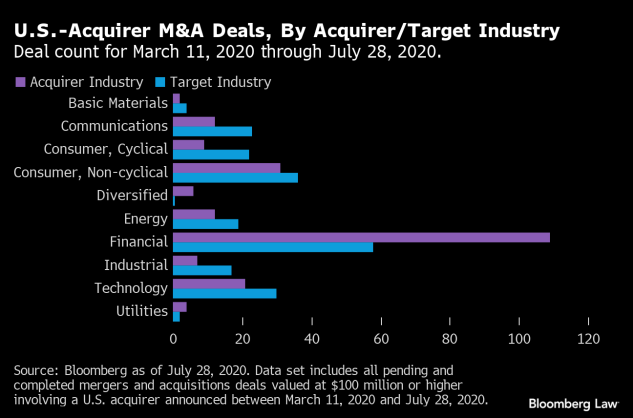 Looking at the industries involved in this subset of deals easily reveals the lack of supply-chain-driven activity. The most prevalent industry by far, both for targets and acquirers, is the financial industry. More than one-third of the transactions with acquirers in the financial sector involved a private equity acquirer. Consumer, non-cyclical and technology come in distant second and third. And even in these sectors, where there is at least some potential for supply-chain integration via M&A, those types of deals have been largely absent so far.