The Lordstown Motors Corp. Endurance electric pickup truck is displayed during an unveiling event in Lordstown, Ohio, U.S., on Thursday, June 25, 2020. On August 3, 2020, Lordstown Motors agreed to be acquired by DiamondPeak Holdings, a SPAC, for $886 million.
Matthew Hatcher/Bloomberg

SPAC mania is bringing a visible and welcome boost to the suffering M&A market. Company takeovers by special purpose acquisition companies, known as SPACs, that are publicly traded on U.S. exchanges totaled $32.4 billion in September and accounted for an impressive 21% of the total volume of company takeovers by U.S. acquirers last month. 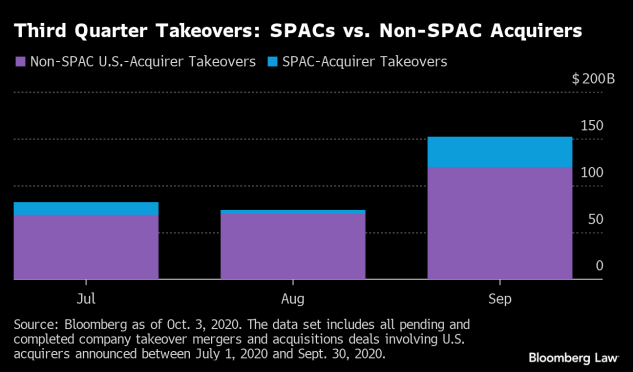 Barely a factor in the mergers and acquisitions scene in recent years — and all but absent between January and May this year — SPAC deals made a noticeable arrival this summer. During the third quarter, 44 pending and completed company takeover deals involving SPACs as acquirers were announced, with a total value of $50.9 billion. That’s 17% of all company takeovers involving U.S. acquirers last quarter. 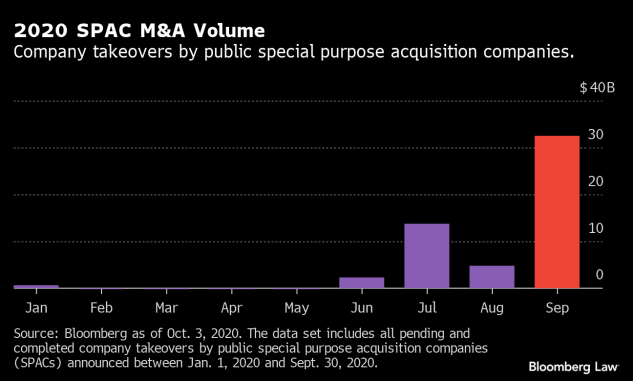 Even if the mania were to stop today, which is not at all likely, SPAC takeovers would still be bound to bring in even more M&A volume over the next two years. SPACs that have already gone public are continuing to hunt for private targets to acquire to complete their mission. Given that even more SPAC IPOs are expected to be issued in the near term, we are probably seeing the very first wave of many SPAC M&A acquisitions to come.

While SPACs are getting the most attention in the IPO world, it’s important to keep in mind that the acquisitions that these SPACs were created to complete are counted in M&A deal tallies. At a time when global deal volume has been nearly halved compared to last year, the impact of SPAC M&A is much more pronounced than it would have been prior to the pandemic downturn.