Small business bankruptcies filed under the new Subchapter V accounted for approximately 18% of all Chapter 11 cases filed in 2020 through Oct. 31, according to calculations using Bloomberg Law Dockets and statistics from Epiq. Expanding Subchapter V eligibility could help even more small businesses by allowing them a more direct path to restructuring during this economic downturn.

In the fall of 2019, Congress made several changes to the Bankruptcy Code. One of those changes, the Small Business Reorganization Act (SBRA), created a new subchapter of Chapter 11—Subchapter V—providing a simplified, equity-friendly, and potentially less expensive route to bankruptcy reorganization for small business debtors. While no one could have predicted the nature and level of economic uncertainty encountered in 2020, the 2019 SBRA is proving to be a useful tool for struggling small businesses.

According to Bloomberg Law Dockets, more than 1,300 debtors have elected to proceed under Subchapter V so far in 2020. This number includes approximately 120 debtors whose cases were filed prior to the Feb. 19, 2020, effective date of the SBRA but chose to amend their petitions to make the election.

Furthermore, when the SBRA became effective, the liability limit to qualify as a small business debtor under the code was $2,725,625. But in March 2020, The Coronavirus Aid, Relief, and Economic Security (CARES) Act temporarily increased the debt limit to $7.5 million for one year. 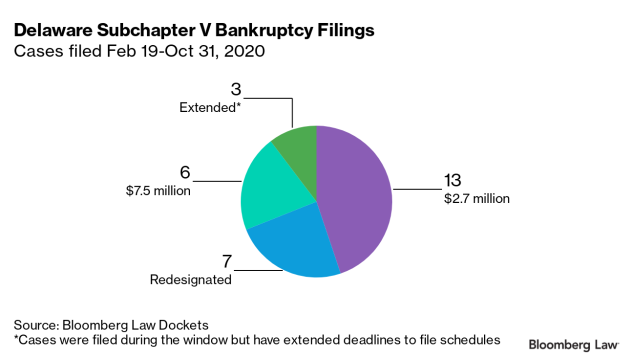 The case filings in the Bankruptcy Court for the District of Delaware, for example, reveal that of the 29 Subchapter V cases filed there, six (20%) had debtors who became eligible for Subchapter V as a result of the increased liability limit provided by the CARES Act. Another seven (24%) were re-designated when the debtor or an affiliate exceeded the statutory debt limit.

If these patterns are typical of other courts and remain consistent, they could bolster arguments for extending the expiration date of the $7.5 million liability limit beyond March 2021 or even further increasing the debt limit.