The second quarter of 2019 made history for its record venture capital exits, near-record percentage of SPAC IPOs (nearly 25%, close to the all-time high of 28.5% set in 2018), and the near record flop of Uber’s enormous initial public offering, representing the largest of the many unicorn IPOs so far this year. It also marked the second significant direct listing in as many years (Slack) and witnessed the continuing popularity of at the market offerings. 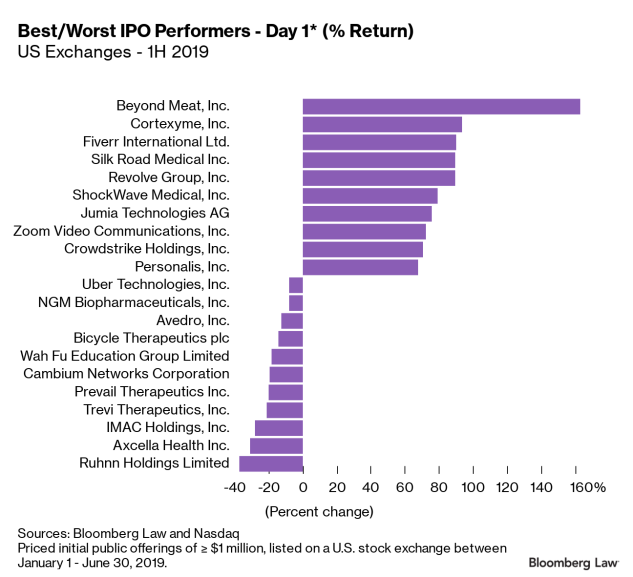 Many other new issues have also done well. Cybersecurity products and services company CrowdStrike priced its recent IPO at $34 a share on June 11. Its shares closed at $92.28 on July 25, a 171% increase. Wireless application solutions provider PagerDuty priced its IPO at $24 a share, above an already bumped-up price range. Its shares peaked at $59.82 per share and have since declined somewhat, but share price remains nearly double the IPO share price in recent trading.

The market has shown strength despite the flop of perhaps the most-anticipated unicorn IPO this year, Uber Technologies, Inc. Uber’s stock price dropped about 14% from its offering price after only two days of trading. Even so, the sheer size of the Uber offering ($8.1 billion) combined with other large, high-profile second quarter IPOs such as Lyft, Zoom, Beyond Meat, and Pinterest, have made this a memorable IPO quarter/half-year.

What are the key differences between IPOs that have flourished and those that have faltered out of the gate? Value. Reasonable prices. Opportunity to share in considerable growth potential.

What characterized the flops? They were large, mature, VC-backed companies like Lyft and Uber that were continuing to lose money and failed to present a reasonable path to profitability.

Initially priced at $72 a share, Lyft has traded as low as $47.17 a share, and closed at $60.29 a share on August 7, well below its IPO price. These poor performances by two of the most anticipated IPOs could have taken much of the enthusiasm away from investors. However, the overall stock market has remained bullish and the IPO market has proven resilient. 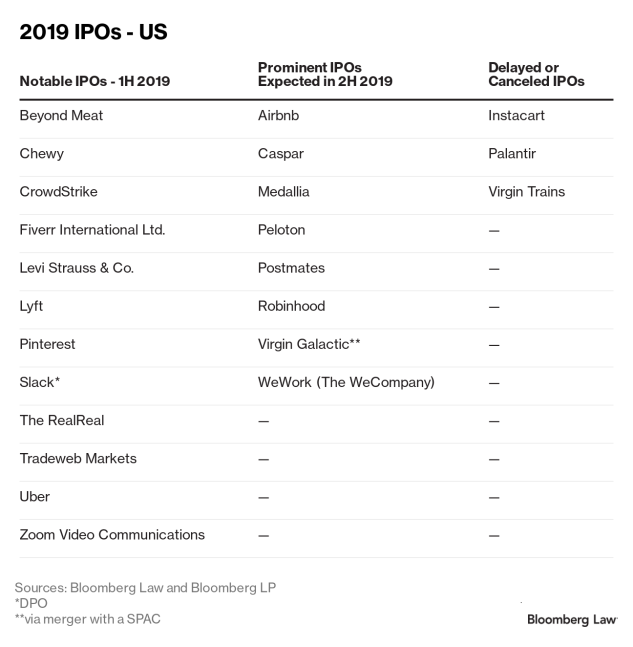 Companies backed by venture capital and private equity represented a substantial number of issuers going public in the first half of 2019. This was particularly true for the most valuable of the companies going public. Of the top 50 largest IPOs by market cap at the time of the offering, 36 (72%) were VC-backed, PE-backed, or both.

Increasingly, companies are not going public because they need public investor money to grow their business; in fact, plenty of private money is readily available for most start-ups with good prospects. Instead, more and more IPOs are fundamentally liquidity events for early investors who believe the company’s value has peaked and want to cash out their gains, book profits, and re-invest in younger start-ups whose businesses hold the promise of far greater returns on their investment.

Airbnb, a company expected to go public later this year, is a prime example of this trend. Airbnb is a mature company that has chosen to stay private rather than do an IPO earlier in its business development. While declining to state exact figures, Airbnb reports it has been profitable for the last two years.

In the past, a business such as Airbnb’s would likely have filed to go public several years sooner. Airbnb’s most recent valuation pegged the company’s worth at $31 billion. When discussing the reason for his pledge to take the company public by 2020, Airbnb Chief Executive Officer Brian Chesky cited not the need to raise capital to fund growth, but rather the need to provide an exit opportunity for employees holding expiring employee stock grants.

Uber similarly has not felt much pressure to go public to raise funds exceeding what private investors can provide. In 2016, Uber received a $3.5 billion investment from Saudi Arabia’s Public Investment Fund. This enormous, late-stage venture capital investment surely delayed Uber’s IPO, because Uber did not need an IPO cash infusion. That delay arguably shrunk the likely upside for IPO investors, contributing to Uber’s poor IPO performance in 2Q 2019. In fact, Uber’s IPO has been one of the worst-performing mega IPOs, ranking as the fourth-worst this decade (behind ZTO Express Cayman, iQIYI, and ADT). Early investors and employees of Uber sold 27 million shares worth over $1.2 billion at the $45 offering price.

Generally speaking, late-stage investments like Saudi Arabia’s in Uber see markedly lower returns on investment than do early investors. Even after Uber’s IPO, Saudi Arabia’s Public Investment Fund’s private investment made three years prior remains underwater. The fund purchased shares in June 2016 at $48.77 a share; the stock closed its first day of trading at $41.57, and closed on August 7 at $39.70.

There is a strong trend toward less value and less upside remaining for public investors by the time companies, particularly high-profile technology companies, sell shares to ordinary investors. Retail investors feel increasingly cut out from the chance to realize significant investment gains by buying shares in a company on its first day of trading.

To many ordinary investors, it can feel like trying to buy Hamilton tickets during the show’s frenzied first years only to realize all the tickets for all the available shows have already gone to insiders and scalpers. 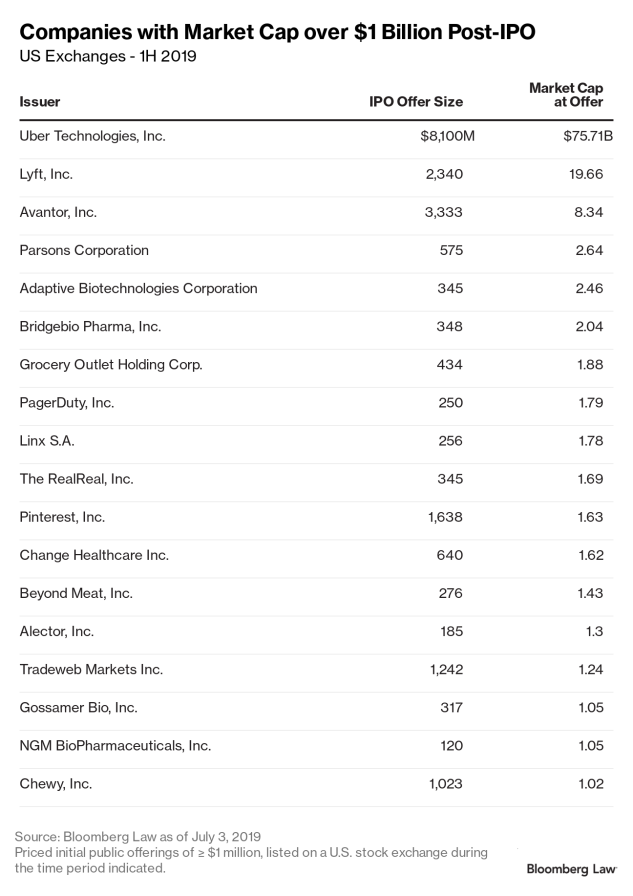 Slack Swaps an IPO for a DPO, Dodges Underwriter Fees

Following the path of Spotify’s direct listing or direct public offering (DPO) in 2018, business collaboration software company Slack took a calculated risk, avoiding the traditional initial public offering, which comes with the assurance that an underwriters syndicate will work to create a market for the company’s shares and support the offering price.

In a direct listing, the issuer creates no new shares for the offering, utilizes no underwriters, and sells only existing, outstanding shares. A DPO is thus best-suited to healthy, developed companies that are less likely to need underwriter support for the stock price early on. The existing trend of companies being more mature when they transition from private to public should give continued momentum to the tentative trend toward DPOs.

As was the case with many large IPOs this year, Slack’s purpose in going public was not to raise capital. Per its Form S-1 filing with the SEC, the company has $793 million in cash on hand. It also has access to plenty of private money. By going public via a DPO, Slack was able to cash out employees, founders, and early investors as in an IPO. It was also able to eliminate the lock-up period preventing most existing shareholders from selling their shares for several months.

The reduced costs and removal of the usual selling restrictions by selling shareholders when going public via a DPO versus a traditional IPO may prove too enticing to ignore for other would-be public companies in the future.

At-The-Market Offerings Keep Up Their Pace 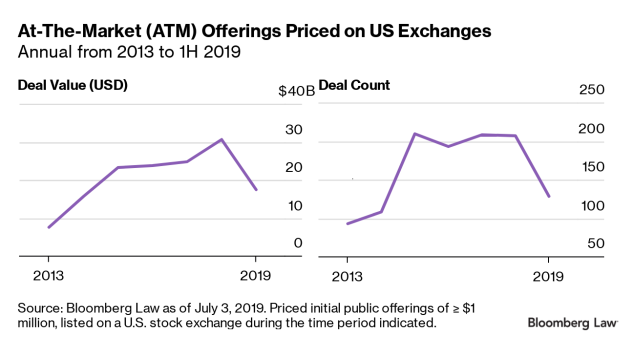 At-The-Market Offerings are an increasingly popular tool for companies to raise money. ATMs are shelf offerings that take place after an issuer has become a public reporting company. Their attractiveness lies in their reduced costs, which result because underwriters are typically not engaged.

In addition, a company can exercise more control by making its own determination to sell when market conditions are favorable, and to sell as many shares as they want at the prevailing market price—rather than a price set by an underwriter.

The IPO and market-entrants pipeline for the second half of 2019 looks robust, and new offerings generally continue to perform well. The IPO outlook for the rest of the year is bright and results could set records.

In the longer term, there are some concerning trends for IPOs. Companies are relying on private investment to finance growth, meaning that start-ups are getting larger and staying private years longer than in the past. Moreover, companies are going public later in their development, perhaps near their peak valuation, by which time early investors seeking exits are securing an outsized portion of the company’s upside. And higher valuations, reduced growth potential, and continuing unprofitability are combining to dissuade investors from a growing number of VC-backed offerings.

IPO alternatives, such as direct listings and newly SEC-cleared Reg A+ offerings by blockchain company Blockstack and video platform YouNow, in addition to private capital, will likely continue to reduce the IPO’s pull for companies looking to raise capital.