When senior securities and capital markets lawyers gazed into their crystal balls (for a recent Bloomberg Law survey), they found that private equity and private companies have the greatest expected prospects for growing legal work in this practice area. These responses confirm known legal industry trends that private equity is surging, and many private companies have been busy going public.

Respondents confirmed that the main reason they see clients or their employer companies deciding to go through the IPO process aligns with the market’s current conventional wisdom: The decision is most often made nowadays to provide a liquidity event for exisiting shareholders rather than to raise capital for the company’s future growth, which traditionally was the main driver.

Over the past five years, more than half of survey respondents reported that, in their practice, the mix between public and private companies had shifted—more or less equally in either direction. However, an equal number reported doing somewhat more work for public companies, and 43% thought the mix of work between their private and public company clients had stayed about the same, indicating that the status quo of a slight private company tilt is being maintained. 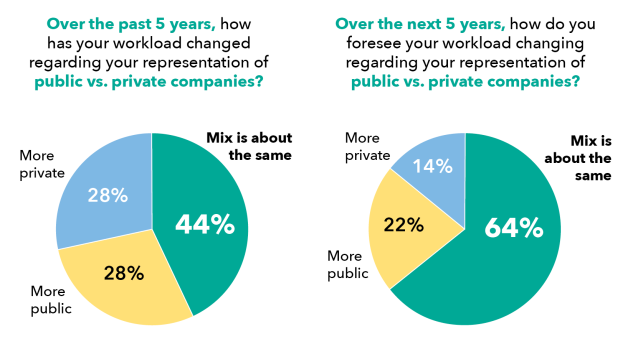 Going forward, the number of respondents who felt that the public/private company mix in their work would remain steady over the next five years was greater than the number who felt the mix would change.

Maintaining a large number of public companies is viewed by many, including the , as good for markets and the economy generally. Even so, there are far fewer public companies now than a generation ago.

Survey respondents attributed this decline in public companies to a variety of reasons. The top three causes were the continuing extra costs—including management’s time and focus—of being a public company (34%), the availability of private capital (26%), and the reduced freedom and greater scrutiny that management and the board have for corporate action (17%).

Asked what could be done to substantially increase the number of public companies in the United States, 59% suggested lowering the regulatory burden to go public and stay public.

Other preferences for boosting the number of public companies included shrinking available private capital, which 32% of respondents suggested; increasing the regulatory burden on larger private companies (30%); and a continuation of the boom in special purpose acquisition companies, commonly known as SPACs (21%).

One of the most important decisions for many companies is whether to stay private or go public—and securities lawyers are instrumental in advising corporations contemplating that choice.

Among securities lawyers surveyed, 60% said that most companies go public to create a liquidity event for shareholders. That is, companies list their shares on public stock exchanges principally to help their shareholders more easily sell their shares. The lower cost of capital enjoyed by public companies was the second-most-cited reason, coming in at 20% of respondents.

Survey respondents were asked how deal mix might change over the next five years. The most popular IPO feature predicted to increase were direct listings (73%), followed by hybrid or nonstandard pricing of offerings (58%) and pre-IPO share trading among accredited investors (55%).

SPACs were the only type of IPO (or deal term) that a majority (56%) viewed as likely to see a decrease in activity, while one-third expected that dual- or multi-class stock structures will decrease in the coming five years.

PE’s Bad Rap Is Not Coming From Securities Lawyers

The role of private equity in finance and the economy has increased by leaps and bounds over the past several decades. Sometimes, private equity’s effect on companies and communities has been controversial. 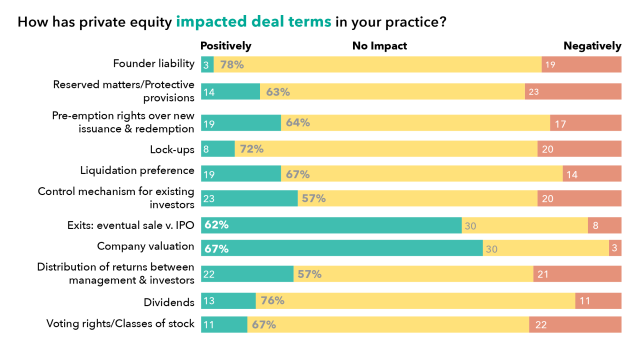 How has work on private equity deals impacted deal terms more commonly seen in transactional practices? More often, respondents felt they had no impact. Private equity was seen as having the most positive effect on company valuation and exits, while reserved matters/protective provisions and voting rights/classes of stock were seen as the terms private equity had affected most negatively.

The future of securities law practice looks bright, based on predictions by our survey respondents.

The most popular areas designated for increased legal activity were private companies and private equity.

Seventy percent of respondents anticipated private offerings, transactions, and governance on behalf of private companies would increase—more than any other activity. Private equity activity was predicted to increase by 60% of respondents, followed closely by 58% anticipating that public company representation would increase.

All this new work will not be transactional, however. Fifty-five percent of respondents expected securities litigation and enforcement work would increase, too.

Respondents self-identified as 28 law firm lawyers, 11 in-house lawyers for a public company, seven in-house for a private corporation, and one “other.” About 15% worked in an organization with 15 or fewer lawyers, more than 21% had 16-100 attorneys, and over 61% worked with at least 100 other lawyers. The industries that support their practice covered a wide range of specialties, but finance, insurance, real estate, transportation, communications, energy, construction, retail, and services were the most common.