As of the close of the second quarter, private equity’s share of M&A and investment volume remained steady, and was fairly consistent with recent annual results.

The question for the rest of the year is whether—in a slowing M&A market with private equity dealmaking now reportedly “off the boil"—the PE industry will continue to be a major driver of M&A and investment activity.

Private equity’s share of controlling-stake deal volume has risen steadily in recent years and reached a high of 32% in last year’s historic market. If PE’s 1H share remains consistent through the end of the year, it would fall only slightly short of last year’s historic high, and it would mark the first time in several years that PE’s share in this deal volume didn’t rise. 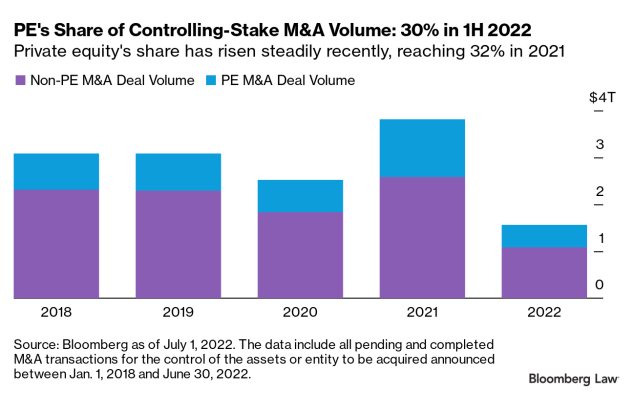 This year, PE buyouts represented 726 of the controlling-stake private equity M&A deals, with an aggregate value of $289.9 billion. Though by count these PE buyouts are set to fall short of last year’s 1,740, they could markedly surpass last year’s $460.6 billion buyouts by volume if the current pace keeps up.

A total of 10,250 private equity investments with an aggregate value of $349.5 billion were announced worldwide in 1H. Stunningly, they represent 71% of global investment transactions year to date. Assuming a continuation of the first half’s pace, these investments are on track to rise slightly from last year’s share, which was just above 69%.

A point to watch: By count, venture capital investments continue to provide a significant boost to investment numbers. During this year’s first half, the majority of PE investments were VC financing rounds. 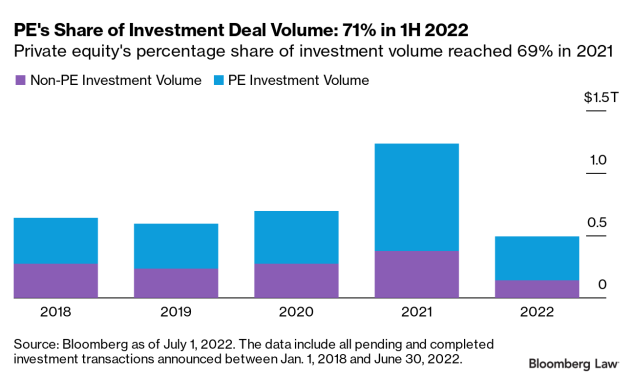 The nearly 9,000 VC financing rounds with an aggregate value of $281.9 billion constituted the lion’s share of the first half’s PE investments. If replicated in the second half, VC volume would only miss last year’s historic peak of $673.4 billion in global volume by 16%.

In short, PE dealmaking, though slower compared with last year, was still a key driver of M&A and investment deal activity in the first half.