Since early 2020, plaintiffs have been filing more patent suits in the U.S. District Court for the Western District of Texas than in any other federal district court—including Delaware.

The Western District’s speed and efficiency, and the draw of a recent large verdict, are likely to keep the plaintiffs filing there for the time being. But, that could change if the future brings more Federal Circuit admonishments and increased inter-district transfers.

This wasn’t always the case. According to Bloomberg Law’s Dockets, the U.S. District Court for the District of Delaware was the top court for patent plaintiffs from 2018 through 2019, challenged only occasionally by the U.S. District Court for the Eastern District of Texas. Starting in January 2020, however, Texas’s Western District pulled ahead and beat Delaware every month thereafter, except November 2020 and February 2021. 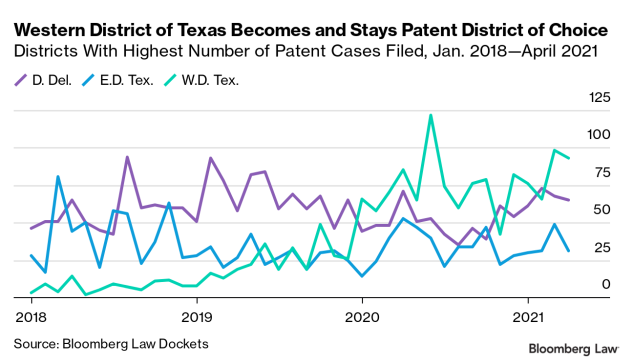 The new volume is going mainly to a single judge. Although the Western District is made up of five different divisions, patent cases seem to be mainly filed in Waco, Texas. That division has only one district court judge, Judge Alan Albright, who is assigned nearly 95% of all the patent cases in the district overall. From January 2020 through April 2021, that’s more than 1,000 cases. To put that in perspective, all of Delaware had only 863 patent cases filed during the same time, more evenly distributed among (mainly) four different judges.

What is the district’s draw? It appears that the judge’s expeditious patent case handling is very attractive to plaintiffs, and a recent big win is likely to keep them filing.

Judge Albright issued guidelines after his first two years on the bench to help patent cases move more quickly. That effort is now bearing out in analytics: Cases filed in the Western District average just 250 days in duration, versus 440 days in the District of Delaware.

And now there is a big success story. A jury recently awarded plaintiff VSLI Technology LLC one of the biggest patent verdicts in U.S. history against Intel Corp.: over $2 billion. This large verdict is likely to lure plaintiffs seeking a big payday because it demonstrates how plaintiffs can win big in the district.

To determine whether the Western District is likely to stay in the top spot, these positives must be balanced against some negatives. Namely, that the Federal Circuit has been reversing the district and has harshly admonished the court for sitting on motions to transfer.

According to litigation analytics, three out of four cases appealed out of the district have been reversed in the last 12 months. In one unpublished decision, the U.S. Court of Appeals for the Federal Circuit said that the court “clearly abused its discretion” by not transferring the case to a district in Florida. In another, the Federal Circuit said that the court again abused its discretion by ordering that a trial be held in Waco for a case that had been transferred to Austin.

Beyond just these reversals, the judge has also been criticized by the Federal Circuit for sitting on motions to transfer. In response, Judge Albright issued a standing order to handle transfer motions promptly going forward.

These admonishments, as well as an increasing likelihood that defendants may be more successful at transferring cases out of the sought-after district, could eventually cause plaintiffs to reconsider the Western District as the patent venue of choice... but not yet.

In the immediate future, the positives will likely outweigh the negatives for plaintiffs who want fast case handling and a big win. For them, the recent rebukes from the Federal Circuit may not have much impact.

In the long term, however, if appeals to the Federal Circuit start to weigh plaintiffs down—especially if they end in reversals or cases transferred out of the district—these negatives could eventually dim the star’s shine. If so, Delaware may shine brightest once again.

If you would like to learn more about how to use Bloomberg Law Dockets and Litigation Analytics, see the Core Litigation Skills Toolkit.