More than $145 billion in pending mergers and acquisitions are awaiting Hart-Scott-Rodino (HSR) antitrust approval. Nine of the 40 pending deals, amounting to roughly $130 billion, have been pending for between 200 and 400 days, and deal parties are now subject to further Covid-19 pandemic-related antitrust delays. These deals include the $83.7 billion Allergan PLC-AbbVie Inc. and $26.6 billion Caesars Entertainment Corp-Eldorado Resorts Inc. mega deals.

The data show that a lot of money is tied up in deals inching towards their first anniversary since they were inked. Most deals provide short extensions on their end dates to allow for up to six months of leeway if they hit more regulatory resistance than planned. But even routine review under current circumstances is more time-consuming than usual, as Department of Justice and Federal Trade Commission personnel need to reach competitors and market participants sheltering at home in order to get a full picture of impacted markets. Merging parties should expect that everything is going to take a little more time and run a little less smoothly than it would in a normal world.

Money on the Line

In mid-March, both the DOJ and FTC announced that they might take longer to review deals, because of challenges due to containment measures implemented to control the novel coronavirus crisis. According to law firm Dechert LLP, which tracks publicly available information on U.S. merger reviews, significant merger investigations by the DOJ/FTC took an average of 11.9 months (about 357 days) during 2019, up from an average of 10.5 months (about 315 days) in 2018.

Outside or long-stop dates in M&A agreements are also typically one year, giving the parties one year from signing to close the transaction. Taking these average antitrust review periods and contract terms into account, we have identified the nine deals that have been pending for between 200 and 400 days as the most likely to be impacted by the pandemic-induced delays. These deals’ HSR approvals would have been expected to be approaching had pandemic delays and process changes not been in place, and they may miss their outside dates, if they haven’t already.

The outside date in the Allergan PLC-AbbVie Inc. transaction agreement (called the “End Date” in this particular agreement), is June 25, 2020 (one year from the signing date) and fast approaching. This is the largest deal currently awaiting antitrust regulatory action, specifically in the form of a consent order reached with the FTC that is pending final commission review and approval. The Caesars Entertainment Corp-Eldorado Resorts Inc. outside date (nine months from the signing date) lapsed last month, and the buyer in that deal is subject to hefty fees as a result. 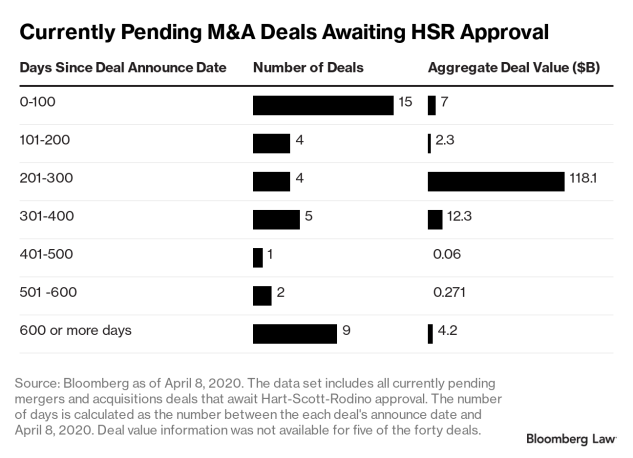 Under the HSR Act, mergers over a certain size must file a notice of intent to merge with the DOJ and FTC. Filing begins a 30-day waiting period, during which the parties can’t close the deal.

One of the two agencies will review the merger. If it poses no competitive concerns, the agency can grant “early termination” of the waiting period—permitting the deal to close immediately without waiting out the 30-day clock. More than half of all HSR-noticed deals receive early termination, according to the FTC’s latest annual report (for fiscal 2018).

If the deal raises any competitive concerns, the agency will review it further. At the end of the 30-day period, the agency can either permit the clock to run out (allowing the merger to close) or issue a “second request” for information to the parties about the merger. Once the parties have fully complied with that request, the agency has an additional 30 days to decide whether to challenge the deal in court, allow it to close as is, or negotiate with the parties to modify the deal to mitigate the competitive harm the agency fears the merger will cause.

Realistically, second requests take months and substantial resources to fulfill. Moreover, the parties often enter “timing agreements” with the antitrust agencies to delay further than 30 days after complying with a second request. All told, very large, complex mergers can take a year or more to pass antitrust review—even if regulators do not sue to block the deal. If regulators sue, even parties that successfully beat that challenge are normally delayed another nine months to a year.

Initially, the DOJ/FTC suspended early termination of the HSR deadline, which would have impacted many smaller deals and even uncomplicated big ones. But by March 30, early termination was reinstated, and the overall impact of that brief interlude should be small.

Time is money and even small delays can cause deals to produce less surplus for the parties. The bigger threat to deals, of course, is massive upheaval in capital markets, labor markets, and commercial markets. Roughly a month into a profound disruption throughout much of the world, predicting whether the fundamentals of a deal will still be sound when the regulators greenlight it will be the biggest challenge.