With recent market volatility causing the $14.7 billion Zoom Video Communications Inc. acquisition of Five9 Inc. to fall apart last week, attention has been called to a potential negative ripple effect for other stock deals. Considering the current economic landscape, as well as the high level of M&A-specific regulatory uncertainty, it’s an appropriate time to check in on just how much of the recent M&A boom—regardless of consideration type—has yet to actually close.

According to Bloomberg data, more than 21,000 global deals announced since the start of 2020, valued at a total $2.5 trillion, remain pending in the period between signing and closing. 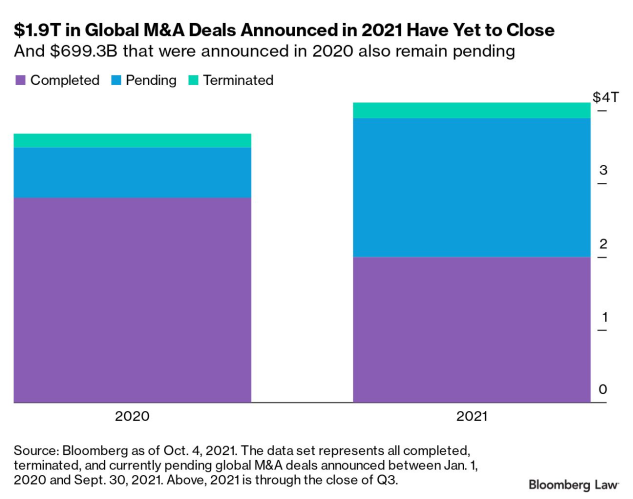 So far, global deals this year are larger on average than they were last year. The average size of deals announced in 2021, for which agreements have been executed, is $82 million, up from 2020’s average deal size of $76 million.

This year’s pending deals are larger, on average, than the deals that have closed ($164 million, compared to $52.8 million)—and terminated deals have been much larger ($1.2 billion). In fact, 2021’s volume of terminated deals has already surpassed 2020’s, although its count is much lower. This illustrates the higher risks larger deals face.

Last year, there was a rush in deal closings at the end of the year. We will be watching to see how many of these pending deals reach the finish line before 2022.