A virus-safety sign is displayed outside a polling location in Washington, D.C., during primary voting on June 2. NLRB officials remain leery of in-person voting for union elections.
Photographer: Andrew Harrer/Bloomberg

The coronavirus-activated brakes applied by the National Labor Relations Board to the union representation process could still be heard grinding as the year passed the halfway point, according to NLRB election data analyzed by Bloomberg Law. 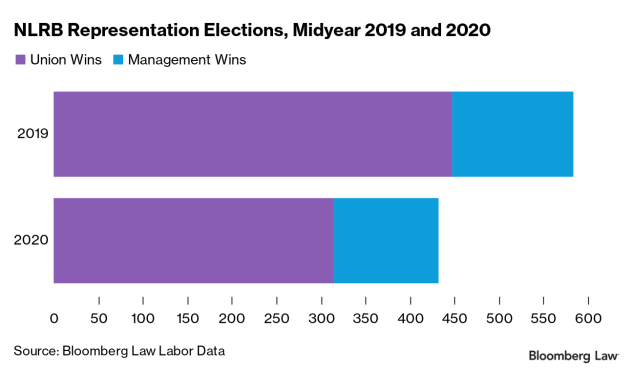 All told, unions successfully organized 16,013 workers through the NLRB election process in the first half of the year, down 30% from 23,018 in first-half 2019.

One silver lining for labor: The NLRB oversaw only 52 decertification elections in the first half of the year, down 47% from the year before. And unions were able to retain 48% of all workers at risk in these elections, compared with only 38% in first-half 2019.

—The West Coast and Mid-Atlantic states experienced both the most union wins and the best union win rates.

—Of the 10 most active unions, only the United Food & Commercial Workers and the Security, Police and Fire Professionals saw more election wins in H1 2020 than in H1 2019.