A new summary data table published by the U.S. Department of the Treasury shows that CFIUS foreign investment reviews are indeed on the increase. From 2014 through 2018, the Committee on Foreign Investment in the U.S. (CFIUS) saw a significant increase in filings and reviews—and transactions abandoned—because of national security concerns. The data table, which was published on November 22, 2019, does not illustrate the impact of the Foreign Investment Risk Review Modernization Act of 2018 (FIRRMA), enacted in August 2018, or the critical technologies pilot program, which went into effect on November 10, 2018.

What the Data Don’t Show

The summary data table made public by the Treasury only provides high level tallies, and not the detailed breakdowns that would shed light on CFIUS reform legislation and pilot program impacts. For example, the table does not indicate the number of mandatory declarations filed or investigations pursued under the critical technologies program which went into effect in November 2018. It only references “notices” and makes no distinction as to voluntary notices versus mandatory declarations.

Because FIRRMA was enacted late in 2018 and the recently issued proposed implementing regulations have yet to be finalized, it is impossible to compare and contrast pre-FIRRMA and post-FIRRMA changes using this new data. Another obstacle is that the data is not broken down by month or quarter.

CFIUS released its Annual Report to Congress at the same time as the summary data table. It contains detailed and useful information (such as numbers of notices filed by acquirer home country and target NAICS code) for 2016 and 2017—in other words, prior to the passage of FIRRMA.

What the Data Do Tell

The data table does, however, demonstrate that foreign investment reviews increased in the years prior to FIRRMA and that parties are abandoning many more deals after a CFIUS investigation. 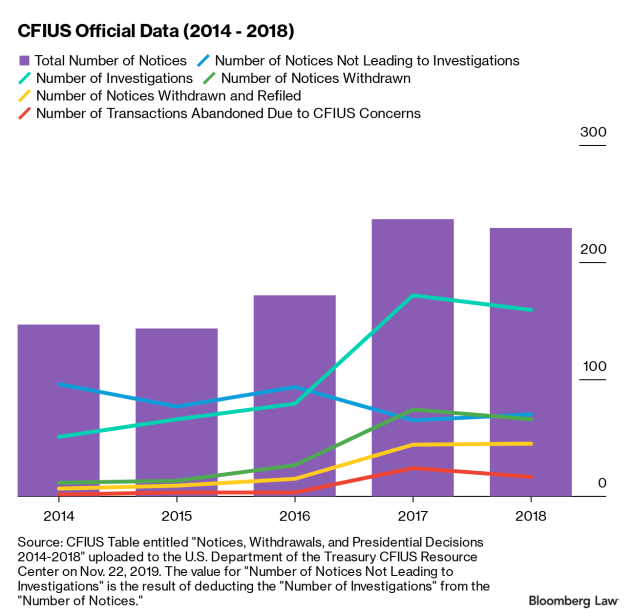 Overall in 2018, CFIUS investigations represented 69% of the number of notices filed, whereas in 2016 this percentage was only 46%. If nothing else, these numbers tell us that CFIUS’s capacity for investigations and review of transactions has expanded greatly.

Significantly, the CFIUS process is now resulting in more so-called “abandoned” deals. In 2018, the number of deals terminated after withdrawal of a CFIUS notice was five times greater than that of any of the three years prior to 2017.

In order to assess FIRRMA and critical technologies, cross-border mergers and acquisitions practitioners and industry players watching CFIUS will have to wait. The Committee’s next annual report to congress, containing detailed data on 2018 and 2019, will be the first to show what impact CFIUS reforms are having on the numbers.