Last month, I asked where the terminations were. Now, they’re here. Sixty-six mergers and acquisitions deals have been terminated since the March 11 World Health Organization pandemic declaration—more than the combined terminations of January and February. Most were all-cash deals and involved Asia Pacific and North America targets. They include the terminated $3 billion WeWork-Softbank tender offer that is now subject to a lawsuit and the $7.5 Billion Hexcel Corp-Woodward Inc. all-stock aerospace deal.

Regarding the handful of terminated deals for which publicly filed agreements are available, none excluded outbreak of disease, epidemics, or the like from the scope of their material adverse effect (MAE) provisions—an exclusion that could have kept buyers on the hook.

Cash Is King, Even in M&A Terminations

During the turbulence of the Covid-19 outbreak, with recession likely, cash is king—and M&A deal terminations are a means to that end. As businesses seek to either hold onto the cash they have or get their hands on more, it is unsurprising that 63% of the M&A deals terminated since the pandemic declaration have been all-cash deals. All-stock deals represented only 15% of these terminations. 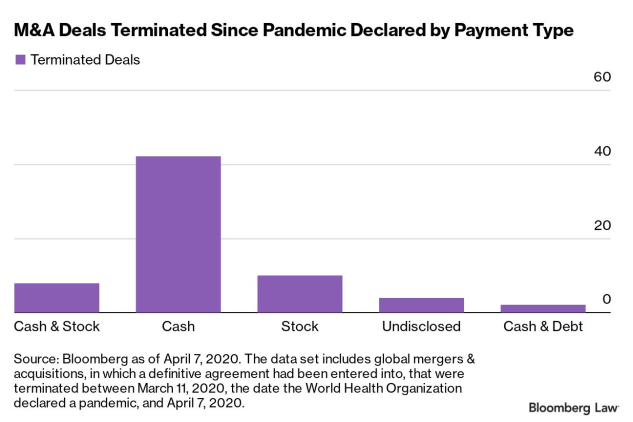 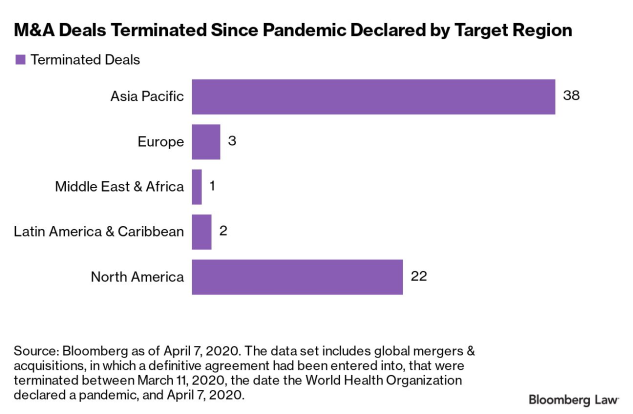 Financial is the top acquirer industry sector and consumer non-cyclical is the top target industry sector among the deals terminated. While pharma is widely viewed as a potential haven for virus-related deal activity during this crisis, this doesn’t mean that one of 2019’s most active M&A sectors wasn’t affected: The pharmaceutical industry is the most common target industry among the pandemic terminations, representing 12% of the terminated deals.

MAEs Excluded Weather and Wars, But Not This

While we only began seeing MAE provisions specifically excluding the Covid-19 outbreak in February, MAE exclusions of disease outbreaks or epidemics have been present in a minority of deals going back several years prior to the pandemic. Typically, MAE provisions qualify both parties’ representations and warranties, covenants, and the obligations of the parties to close the transaction. In the five deals terminated since the pandemic declaration for which a publicly filed agreement was available—including the Hexcel Corp-Woodward Inc. deal—none excluded disease outbreaks or epidemics from their MAE provisions. This means that in these deals, the door may have been left open for buyers to claim that an MAE had occurred as a result of the pandemic.

Though the agreement has not been reviewed because it is not publicly available, according to We-Work directors in their suit against Softbank, the stock purchase agreement in that terminated tender offer did not contain an MAE provision. 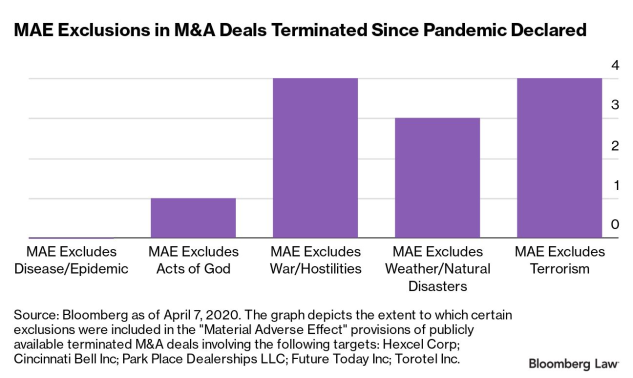 Of the five publicly available terminated deals, four contained common MAE provisions that excluded terrorism and the outbreak of war or hostilities. And three of the five excluded weather events and/or natural disasters.