Beyond short-term impacts, like deal terminations and related litigation, and trends we expect to see for the duration of the downturn, such as distressed deals and management buyouts, the beginnings of potential longer-term changes in M&A dealmaking are also emerging. Some of the crisis’s effects on contract drafting and deal logistics may even be permanent.

The M&A market has contracted significantly, indicating that the boom of recent years is over. Looking at pending and completed announced global mergers and acquisition deals only, 2020’s year-to-date dollar deal volume for the middle, large, and mega markets combined is 43% lower than in the same period last year. Mega deals—the $10 billion-plus deals that played a pivotal role in boosting sky-high aggregate annual deal volumes in prior years—are largely absent from the headlines. Mega deal volume has dropped by a staggering 67% compared to the same period last year. 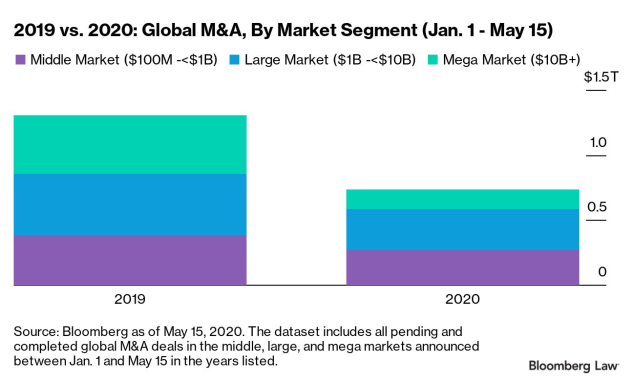 The middle and large markets, where the most deals take place, were already experiencing relatively low deal volume in 2019. Now, both are seeing a drop of around 30% in deal volume compared to the same period last year.

In the new post-boom landscape, we can expect to see a smaller M&A market overall and mega deals playing less of a role in boosting volume. Private equity is still holding on to its large slice of the M&A pie, and may steal an even bigger portion this year.

The data indicate that existing shareholders may be throwing lifelines by way of equity injections into ailing companies, and some management may be trying to rescue them outright (all while also taking advantage of low stock prices). Both additional stake purchases and management buyouts, by volume, are up compared to the same period last year.

To date, $4.2 billion in pending and completed management buyouts have been announced this year, compared with $2.4 billion in the same period last year. Announced pending and completed additional stake purchases this year total $141 billion and are up only slightly from last year’s volume of $136 billion during the same period. But, given the current low total global M&A deal volume, this amount now represents a larger portion of the market—roughly 17% of all M&A activity. 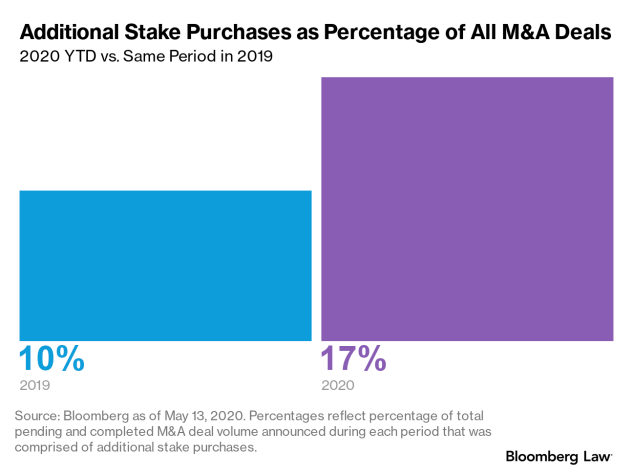 As long as we continue to see market volatility and overall low company valuations, we expect both of these trends to move upwards.

So far in 2020, 28 pending and completed bankruptcy or liquidation M&A deals, valued at $1.7 billion, have been announced (year-to-date). This count is higher than the 19 deals that were announced in the same period last year, which represented a much larger aggregate volume ($6.6 billion). But the flood isn’t here yet. As more companies fail to survive the crisis and bankruptcies increase, the trend in distressed M&A is bound to also climb.

The pending and completed distressed M&A acquisitions this year include five transactions involving Dean Foods Company as the seller. The milk processor, one of the U.S.’s largest dairy companies, was already in distress prior to the pandemic. The same is true of Neiman Marcus and Moviefone Inc., which are also on the list this year.

We are not yet seeing an uptick in non-distressed asset sales by either volume or count compared to last year. A total of 3,128 asset sales, valued at $138.5 billion, are pending or have been completed this year. This asset sale volume represents roughly 16% of all 2020 M&A volume, which is on par with the same period in 2019, which saw roughly 18%. We may see a rise in asset sales yet, as healthy companies opt for leaner operations and boosted cash reserves to better weather the downturn.

Pandemic MAE exclusions are very likely to be a permanent fixture in M&A agreements even after the crisis passes. Based on Bloomberg Law’s transactional precedent database, which contains all publicly filed M&A contracts in the U.S., 244 M&A agreements have excluded pandemics from the scope of their “Material Adverse Effect” (MAE) provisions since 2006. Noticeable numbers of these pandemic exclusions started appearing in 2015 and reached a high last year, with 41 such exclusions. 2020 has already exceeded all previous years, and we haven’t even hit the halfway mark: There are 52 publicly filed M&A agreements excluding pandemics from the scope of their MAE provisions this year to date. 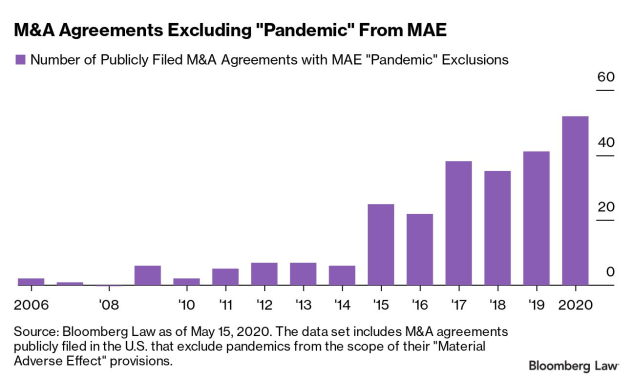 Many but not all of the agreements specifically exclude the Covid-19 pandemic along with pandemics generally. Conversely, a small handful of the agreements exclude only the current Covid-19 pandemic and not pandemics generally—a smart move, if you consider the possibility that a totally new and different pandemic could arise. Anything is possible at this point.

A handful of the MAE provisions also exclude non-human pandemics, and one also excluded “outbreaks of food contamination or food-borne illness”—options to consider for parties doing deals in the agricultural, food, and hospitality industries.

Some of my favorite non-pandemic exclusions (because this is a fun Armageddon game): volcanic eruptions and nuclear incidents. Smart exclusions, considering that they don’t necessarily fall squarely under weather or the other classic exclusions.

It is important to note that while there are general questions about how these provisions will be legally enforced, the significance of these provisions goes beyond judicial precedent: They reflect the intent of the parties and what risks they have decided to assume.

As many work from home amid the pandemic, so do M&A dealmakers. Tales of big, and even mega, deals being negotiated and sealed via video conferencing are increasingly emerging. It seems unavoidable that this global experience will lead deal parties to be more open to remote negotiations than before, and could even lead to a new normal in which the efficiencies of remote work on deals are preferred. Diligence by drones may even be part of that new normal.

As for deals getting closed remotely, M&A agreements allowing execution by electronic signature have already long been on the rise, but we expect the pandemic to push this further toward universality. 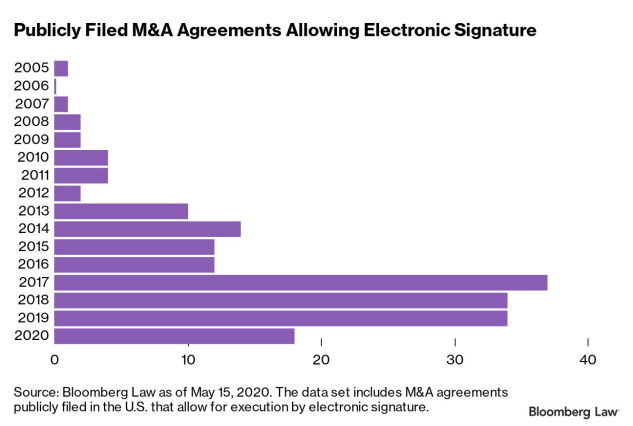 And, while we’re at it, is there any chance we can get rid of references to execution “by facsimile,” once and for all?