Along with a corresponding increase in the unemployment rate among legal workers—especially women—the February data suggest a renewed determination by workers to re-enter the legal workforce. 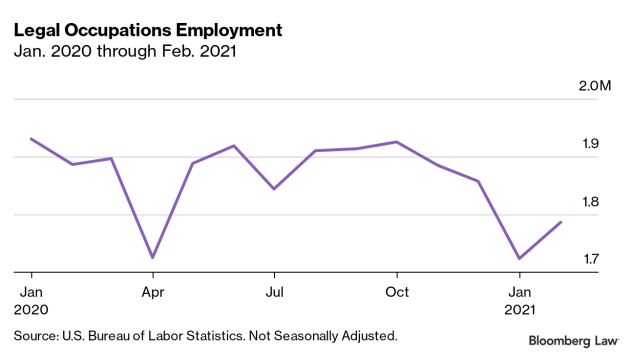 The number of workers reporting employment in legal jobs rose from approximately 1.72 million in January to 1.79 million in February, the BLS said. The 63,000-worker increase was the largest since August.

And, just like in August, the February bump in legal employment went hand in hand with an increase in the number of legal workers claiming unemployed status. The unemployment rate among workers who reported having legal occupations rose from 3% in January to 3.3% in February, the highest mark since—wait for it—August.

A simultaneous increase in both employment and unemployment shows that there’s new energy in the legal hiring and job-hunting arena—perhaps a result of greater mobility due to the growing availability of Covid-19 vaccines and the increasing number of schools that have resumed on-site learning. And based on statements by Federal Reserve Chairman Jerome Powell and by the BLS itself, it’s even possible that February’s unemployment rate was, if anything, underreported due to pandemic- and weather-related hindrances.

What is certain is that women in legal professions are joining the unemployment ranks at a greater rate than men are. 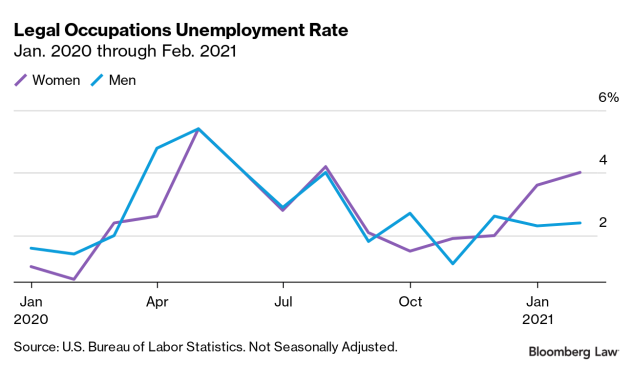 The legal unemployment rate for women rose to 4%, up from 3.6% in January, while the rate for men only nudged up from 2.3% to 2.4%. (Employment for both genders rose in February by about the same amount.) These might be workers that had to exit the legal job market entirely last year as the pandemic wreaked havoc on families, schools, and communities. If so, February’s figures could signify an encouraging step for women seeking to reclaim their legal careers.