Amid the slowdown in the mergers and acquisitions market, the number of deal terminations has been on the rise.

To date, July has seen 21 terminations of controlling-stake deals, including the largest—and arguably one of the most drama-filled—deal terminations of the year: Elon Musk’s teetering $44 billion buyout of Twitter Inc.

The parties to that deal entered into a definitive agreement on April 25, and Musk purportedly terminated the agreement on July 8 via letter sent by counsel, triggering Bloomberg’s categorization of the deal within M&A data as a termination (for now). Twitter filed a complaint with the Delaware Court of Chancery on July 12, and the first hearing in the case is slated for tomorrow. (Bloomberg Law users can access the docket here.) 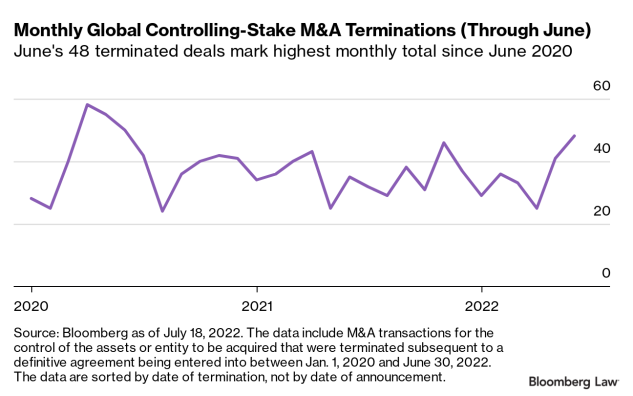 Year-to-date, 233 controlling-stake M&A deals with an aggregate value of $127.5 billion have been terminated, which is only a few terminations up from the same period last year.

By way of comparison, in 2020, the M&A market was reeling from the pandemic, and there had already been 282 terminations of controlling-stake deals with an aggregate value of $115.6 billion by this point in July. So, while termination counts are slightly lower at present, it’s certainly notable that the aggregate dollar volume of deals terminated this year has surpassed the same period in 2020.

-With assistance from Annemarie Lyons and Isaac Goor, Bloomberg L.P.